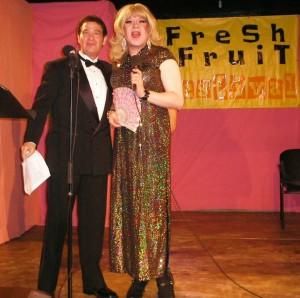 Speaking about all the ultra-creative men and women (artists, poets, actors, musicians, dancers, and others) surrounding her, the self declared “Puerto Rican Dame Edna” La Contessa declared, in her heavily accented Spanish, “I haven’t seen this much talent since Saturday night at my place!“ Well, of course, I wasn’t at her place two nights before (I swear, I wasn‘t!), but I will agree that on Monday, June 21st at the Jan Hus Theater, talent in all its varieties was just bustin’ out at the seams. It seems hard to believe that at The Sixth Annual Fresh Fruit “Fruits of Distinction” Awards in 2009, Fresh Fruit Festival Artistic Director Carol Polcovar expressed concern, out loud, that due to the deepening economic woes, there may not be an Awards in 2010. Well, let’s just say that on June 21, 2010, the powers of creativity and dedication once again prevailed! The Fruits of Distinction Awards, also known as The Fruities, were back– and these Fruits of Distinction were as colorful, delicious, and as juicy as ever… and good for you too, I might add! The night opened with the smooth, funky grooves of Award-winning sean360, featuring a variety of guest musicians (Barnacle Bill, Ms. India M., and Ova Floh); and ended with an all-out finale by Award Winner (for Musical Performance) Nhojj. In between, there were many more displays of talent, ranging from the avant guard, to the political-flavored, to the laugh-out-loud hilarious… and 21 “Fruits of Distinction” Awards were presented to GLBT and GBLT-supporting artists of all genres. There were also three “Harry Wieder Passion Fruit Awards” given to individuals who support GLBT and GLBT-friendly art in all of its varieties. This year, the Passion Fruit Awards were presented to New York State Senator Thomas Duane, ground-breaking playwright Doric Wilson, and TV producer Tony Sawicki (“Under the Pink Carpet TV”).

The night was hosted by the charismatic Frank Calo, Producer of Spotlight On Theater and The Fresh Fruit Festival’s new Assistant Artistic Director; and omnipresent drag diva Lady Clover Honey. After the opener by sean360X and company, Calo declared, “What you saw at the opening was just an ordinary night at The Fresh Fruit Playhouse!” (FYI: That’s the monthly event that Calo hosts the last Tuesday of the month from October through July at The Nuyorican Poet’s Café.  Mark your calendars!) With her polished fingernail firmly on the pulse of all things media-savvy (TV, movies, and theater), Lady Clover Honey is certainly “Everybody’s Girl”– hence her choice of song for the night. Frank and Ms. Clover, flanked by two buff muscle studs (AKA “trophy boys”.), introduced our Winners: a stunningly diverse array of New York City’s best and brightest. They included a rainbow of ages, genders, ethnicities, and artistic genres. The event was marked somewhat by the tragic death of Harry Weider, the Fresh Fruit Festival‘s Community Liason. Wieder, a gay rights and disabled rights acticist as well, was killed on April 27 when he was hit by a taxi while crossing the street. The Fresh Fruit Festival organizers shared some Harry Wieder anecdotes: such as when Harry displayed his new pair of boxer shorts, which displayed “No! No! No!” … until the lights went out, when they then declared, “Yes! Yes! Yes!” Cookie Pemberton, Fresh Fruit Committee member, spoke of Harry’s influence: “If you didn’t like a play that Harry liked, you LEARNED to like it!“ As a tribute, the Passion Fruit Awards were renamed The “Harry Wieder Passion Fruit Awards”. While not in attendance physically, Wieder was certainly there in spirit; he’d no doubt be proud of the Winners that night. Among the many, many highlights were a performance by “honorarily gay” Rome Neal, Recipient of this year’s Award for Curator. (Rome curates the Fresh Fruit jazz component, among other endeavors.). Dedicating the song to “the little girl in all of us“, he gave the audience the Richard Rodgers/Lorenz Hart pop/jazz classic “ Little Girl Blue”. It was impossible not to be touched by this gem, which has been reinvented many times through the years. As he did with his performance at the Awards the year before, Neal brought the venue to silence; not a word was heard during, or for a good time after, his performance. There was also Ana Iza Otis, Winner for Musical Performance. As soon as this sassy, beautiful woman walked on stage, the entire audience knew that they were in for a real treat– even before she sang a single note of her “God Bless the Child“. Sure enough, her amazingly hearty voice matches her zesty persona very well. YaliniDream (Winner, New Artist), surely one of the most self-styled artists on the scene today, gave us “The Story of Butta and Fire”, a mix of storytelling (childlike simplicity combined with adult sophistication), movement, and performance– all ripe with metaphor.

And let’s not forget the comedy! Theresa Fischer performed her intensely crowd-pleasing “Old Fashioned Love Song”, a comedic romp of a song that tickled the funny bone and stimulated the lesbian sensibilities in all of us. La Contessa, after commenting on her red sequined dress, (“I borrowed it from Marilyn. She won’t need it anymore!”), belted “Everything’s Coming Up Roses“… although it came across more like “Everything’s Coming Up Hoses“. You just knew that somewhere, Harry Wieder was laughing out loud. It was then time to present the envied Passion Fruit Awards. Recipient Senator Tom Duane was sadly not in attendance.(He was, understandably enough, in Albany.) His Chief of Staff, Laura Morrison, was in attendance and accepted his Award for him, stating about Duane, “Tom always does it with passion, and always does it as a fruit!” You gotta love that! Likewise, producer Tony Sawicki also had to miss the Awards, due to illness. Lady Clover Honey, Sawicki’s collaborator on “Under the Pink Carpet TV”, accepted for him. Carol Polcovar presented the Award to playwright Doric Wilson. She recalled the story about one of the Fresh Fruit shows: “One of the evenings was a variety show. The last pieces involved a particularly large lady talking to us for quite a long time in the nude. (She was in the nude, not the audience!) Doric dutifully sat through the whole evening and write the kindest and undoubtedly one of the funniest sentence about that act… It was ‘coded’ so it would only be noticed by anyone who was there and designed to hurt no one’s feelings. I still think of this review when I need a good laugh about the work many of us have decided to devote our life to. It is with this greatest pleasure I present the Harry Wieder Passion Fruit Award to Mr. Doric Wilson!” The final performance was by Nhojj, whose astonishing “The Gay Warrior Song” song became an all-out climax of musical magic as many of the other performers of the night joined him on stage for a synergy of music, movement, and spirit.

The Awards show was a lot of big talent on a small stage, but it was the many smaller, priceless moments that made this event truly memorable. One of them was when Greg Fox (Winner, Acting) thanked his “beautiful girlfriend, Emily, who always holds scripts for me”. Likewise, Alex Bond (Winner, Outstanding Event) also thanked her husband, who she revealed holds her scripts for her as well. Hmm… Is holding scripts the new lovemaking? Or how about when BJ Watkins, accepting her Award for “Second Banana”, commented, “Thanks for making me Second Banana… which is weird as a lesbian!” And of course, I wondered if “trophy girl“ Appolonia Cruz would top that outfit that she created in 2009. Let’s just say, she did. Throughout the night, many of the creators and participants of the Fresh Fruit Festival simultaneously lamented and made jokes about the Festival’s budget… or, shall I say, lack thereof. But as I said before, the forces of talent, creativity, and drive are pretty powerful. Put an other way, they are the seeds that– when shown some love and attention– are guaranteed to grow some very sweet fruit!