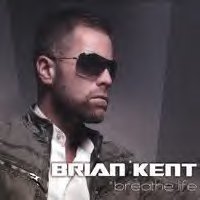 “Breathe Life”, the title track of singer/performer Brian Kent’s new album, entrances the listener right from the beginning. As Kent sings, strobe lights flash, shiny disco balls spin, and go-go boys gyrate atop giant black boxes. And we haven’t even gotten yet to the reaction from the crowd, who we envision is going wild with abandon. Kent knows what we want. With pulse-pounding beats, urgent-sounding rhythms, and frenetic tempos, most of Brian Kent’s expertly produced, debut full-length CD was patently made for dancing. But what makes “Breathe Life”, the album, stand out? For starts, many of the songs– including “I Pray” (with its addictive beat and some genuinely catchy hooks), “Wish I Would Have Said to You”, and “Not Gonna Waste My Time” — transcend the label of “club music” and truly become new dancefloor classics for 2007 and beyond. This album is guaranteed to reinvigorate even the most jaded party boyz and girls. Then, there’s the man behind the music. Lest we forget, Brian Kent was an experienced singer long before he got the masses dancing with “Don’t Stop Believin”” in 2005. Rather than the cool, dazed, and distant vocals that often characterize club music, Kent’s voice is far more concrete and earthy, with an ever-so-slight twinge of pain and angst. Put another way, his distinctive vox is strong on the surface but with a naked, vulnerable streak running through. His vocals are far more trained and solid than you’d expect from any performer who may identify himself or herself as a “dance music” artist. And of course, there are the lyrics. Granted, dance floor junkies may not be paying much attention to the words of the songs when Kent’s music is blaring loudly at a club. But with a few spins of “Breathe Life”, it may be impossible not to take note — especially when Kent shows his stuff on the title track: “Breathe life into me; A new day begins, I’m spreading my wings; ‘Cause love makes me fly, as you give me the kiss of life…”. Kent recruits superdiva Zhana Saunders for five songs. Her grand, elevating, far-reaching style is an interesting contrast to Brian’s more grounded delivery. Just listen to her hit the heights on “Not Gonna Waste My Time” for proof.

As we said before, Kent is a trained vocalist, and to verify it, he offers a much-needed cool-down session from the dancing with the fourth track, “Everything Changes”. This stripped-down, piano-driven piece evokes the quiet torment and strength of “You Must Love Me”, Madonna’s original song for the movie “Evita”. Later on, Kent proves that he can more than hold his own amongst the best players on the charts today with “Drive”. His powerhouse vocals make the song, from the soundtrack of the movie “Kiss the Bride”, one of the standout tracks on the CD. “All I Wanna Be” boasts more of a classic rock sound, thanks to some heavy-hitting acoustic and electric guitars and bass. Breaking the barrier from dancefloor gem to dancefloor anthem is “I’m Not Crazy”, the calling card of the album. It’s hard to pinpoint what makes this song so infectiously appealing– but no doubt, it’s in part due to the combo of Brian’s energized vocals, the expert layering of retro grooves and edgy special effects (Love that vocoder!), and an underlying rich, self-indulgent melody. If “I’m Not Crazy” is a dancefloor anthem, then “Don’t Stop Believin'”– Brian’s high-energy, electro-dance reinterpretation of Journey’s 1981 megahit– is an anthem for everyone. More than just speeding up the tempo (slightly) and upping the energy level (greatly) of the original, he reinvents the classic as a journey (ahem…) through the challenges of the urban jungle of New York City which Kent calls home. (Although, the universal message can be appreciated in Las Vegas, or L.A., or Madrid, or London, etc…). For this remix (the 2007 NYC Pride Mix), Zhana doesn’t rival Brian for “diva time” but rather flutters around his performance like a winged muse, chiming in every so often to remind us of what she can do. The result is no less than triumphant.

On his rock solid CD, Brian Kent levitates dance music to previously unexplored heights AND gets the chance to really show his singing talents with tracks like “Everything Changes” and “Drive”. “Breathe Life” is truly about transcendence through music. So, once again, I have the lyrics to his opening title track spinning turntable-style around in my head: “Breathe life into me; Show me the way, and all I can say is I never felt so alive…” So alive? The audience will likely experience the same feeling when giving this album a spin.