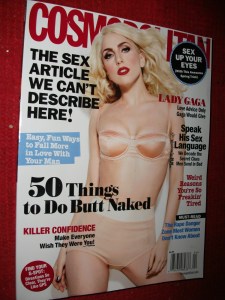 The latest woman to grace the cover of “Cosmopolitan” is 24-year old Stefani Joanne Angelina Germanotta… AKA Lady Gaga. Not many women can wear flesh-colored, hi-rise granny panties and make them look sexy… but the diva who commanded us to “Just Dance” back in 2008 and hasn’t slowed down since has proven that she can do just about anything.  Inside the mag, author Christine Spines states about Gaga, “She’s kind of a genius… but she’s also kind of bizarre.  Who is she, really?  We plan to find out.” For starts, Ms. Gaga takes the “Cosmo Quiz”, giving her fans such revelations that that her nickname is “Gaga-loo” and that the best thing about leotards is that “you can pretend you’re Jane Fonda”. (Wow, I was really dying to know that…) But on to the dirt: What about S-E-X?  The gay icon makes no bones about how she’s put finding Mr. Gaga on hold to concentrate on her career.  In fact, earlier this week, our First Lady confessed that it’s been a while since she’s declared “There’s a monster in my bed!”  To put it another way, she’s been… celibate!  Gaga told reporters last week at MAC Cosmetics’ Viva Glam event in London, “Sex should be fun, beautiful and colorful, but women get the short end of the stick.” (Insert your “disco stick” joke here…)

While she revealed to “Cosmo” that she’s certainly had her fun in the past, she’s currently one of the single ladies that her friend Beyonce sings about.  She states, “I’d tell any new boyfriend to hang on, because it’s going to be a bumpy ride.”  Now, that’s a ride many guys would be willing to fasten their seat belts for!  Yet, it would indeed take one helluva guy not to be intimidated by the gal who has already won two Grammys and became the first artist in Billboard history to have her first five songs hit Number One on the Pop Charts.  This writer, for one, finds it too disturbing that the star who’s bringing sexy back isn’t getting her freak on at least once a night.  As party girl Patsy Stone declared in “Absolutely Fabulous” a few years ago, “Celibacy leaves a LOT to be desired!” Ain’t it the truth.  And, I keep thinking about Gaga’s spiritual goddess-mother Madonna, who celebrated her fame by sexing high-profile boyfriends and girlfriends faster than you could say could say, “Justify My Love”.

So, for all my straight male readers out there: If you think you’re man enough to be crowned Lord Gaga, here’s a tip should you decide to make your move: In the “Cosmo” article, Gaga declares that her perfect Saturday night date would be hanging out in bed, watching old horror flicks, and eating New York-style pizza.  And whatever you do, don’t call her “Stefani”!