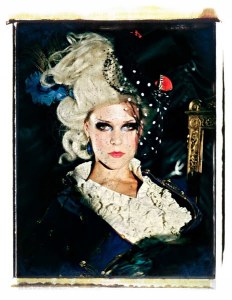 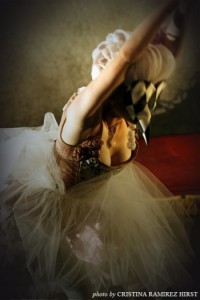 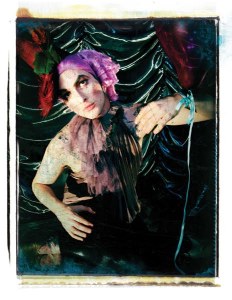 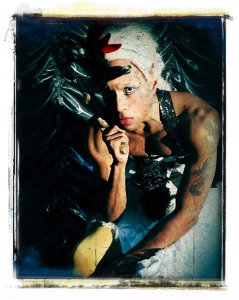 “Le Cirque Feerique” (“The Fairy Circus“), features eight classic children‘s fairy tales, including “The Ugly Ducking“, “The Princess and the Pea”, and “Ferdinand the Bull”. The all-ages show kicks off with “The Frog Prince”. Most of us know this oft-retold love story… but I guarantee that you’ve never seen anything close to the opulent vision of the Neo-Baroque theater-dance group Company XIV. This time around, the frog seduces the princess not with wit or sympathy, but rather with an elaborate dance routine that would make even the most ardent ranidaphobe pucker up. The princess gets her mate — but this is just the beginning, boys and girls: The audience remains seduced throughout the entire spectacle. Making its world premiere in Carroll Gardens, Brooklyn at The Bond Street Theatre, “Le Cirque Feerique” creates a storybook world come to life: a glittery, ruffled, peacock-feathered fantasia which defies everything from gender to time and space. The interpretations of these beloved tales of our childhood, all done with unyielding elegance and visual splendor, will fascinate and thrill the masses. (To echo the words of our Ringmaster [Jeff Takacs], that includes “ladies and gentlemen, boys and girls, young and old, rich and poor”, etc… ) The choreography shows enormous respect for the art of dance in many of its varieties, but what impresses us most of all is how Austin McCormick (“Le Cirque Feerique”’s co-creator, director, and choreographer… and one of the dancers as well) brings some bold, awe-inspiring creative innovations to every scene. Likewise, the eight tales keep their timeless appeal, but there‘s a humor and sensibility that’s very much in tune with audiences in 2010 and beyond. Some of the stories are tweaked a bit: The Company’s version of “Cinderella” is deliciously darker than the tale we’re used to hearing, complete with a revisionist ending that you’ll probably like better:
“She’s wishing for a decent man,
They’re hard to find. D’you think you can?
Within a minute, Cinderella
was married to a lovely feller;
By trade, a simple storyteller,
Whose every story was really stellar;
Their house was filled with smiles and laughter,
and they lived happy ever after.”

The dancing is flawless. As Ringmaster, Mr. Takacs (who also co-created the show) comes across as the hardest working man in show business. Forget Mother Goose. He’s more like Big Daddy Hawk, imperiously overseeing a truly magical kingdom… and, to complete the role, he gets to play the bamboozled monarch in “Emperor’s New Clothes”. (Fear not, parents: This version is safe for the kiddies!)

How do I feel about “Le Cirque Feerique“? I think Alice put it well in “Alice‘s Adventures in Wonderland“, 1865: “When I used to read fairy-tales, I fancied that kind of thing never happened, and now here I am in the middle of one!” The audience will no doubt feel the same!

Company XIV‘s “Le Cirque Feerique” plays at The Bond Street Theatre, 303 Bond Street (between Union & Sackett) in Carroll Gardens, Brooklyn. Performances are Saturdays at 2pm and 7pm and Sundays at 2pm and 5pm, through June 6th. Tickets are $30 for adults and $25 for children 16 and under, students and seniors. Visit http://www.CompanyXIV.com for more!