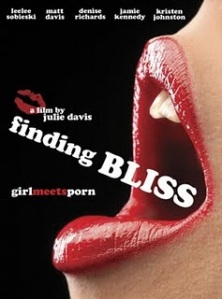 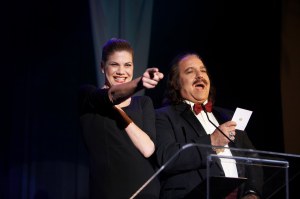 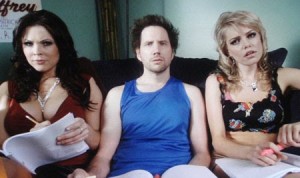 In Julie Davis’ “Finding Bliss”, the uniquely beautiful, 25-year old actress Leelee Sobieski (Her face looks like a medieval portrait of a European maiden come to life.) plays Jody Balaban, an aspiring 25-year old writer of screenplays. She has an amazing script: a romantic comedy which, to paraphrase one of her friends, “no one has read”. After spending a year in Hollywood,
she winds up not directing movies, but directing traffic instead. Innocently, Jody accepts a job as an editor at Grind Productions, not realizing that it’s an adult film company (Never say “porn”, as the big boss Irene Fox, brilliantly played
by gravel-voiced Kristen Johnston, tells her). Hmm, Jodi ponders. Maybe she can use the Grind studio to secretly create her own film at night!

“FInding Bliss” is essentially an R-rated Lifetime Television for Women movie, right on down to the soundtrack (Note the music that plays as Matthew Davis’ Jeff makes his entrance…). Even at its most explicit, the sexy aspects seem more funny and cute than salacious. In the hands of another director, it could have turned into a serious misfire: a well-intentioned female-centric movie dressed in an X-rated chicken suit. But thanks to the young hot cast of characters, the script, and some nice directorial touches, the various faces of the movie integrate quite well. Put another way, “Finding Bliss” wins us over. Director Julie Davis makes the movie work as a romantic comedy while showing as much respect for the adult film industry as she can get away with. Specifically, the audience realizes that these hard-working and hard-playing porn actors are bona fide human beings (who also aren’t as dim as we want to believe). Most likely intentionally, the director only VERY briefly skirts over the darker aspects of the jizz biz. The happy ending– yes, there is one– is both touching and believeable. The most credit for the appeal of “Finding Bliss” goes to not only director Julie Davis, but also lead actress Leelee Sobieski. Although we may not buy that Jody is so naive and unblemished at the beginning of the film, it’s a testament to Sobieski’s acting ability that she makes her character believable afterward. Jaime Kennedy as Dick Harder not only shows his butt in an extended shot, but also boldly goes full frontal. For some lovers of celebrity skin, that alone may be “finding bliss”!

“Finding Bliss” is now playing. Visit http://www.FindingBlissthemovie.com for locations and much more!