“I LOVE YOU, PHILLIP MORRIS”: The Incredibly True Adventure of Two Men in Love 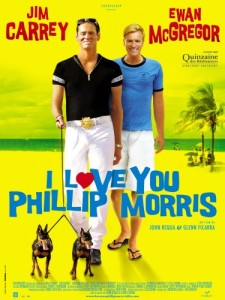 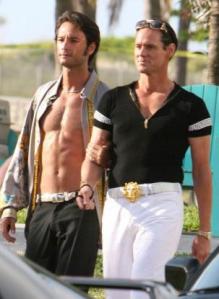 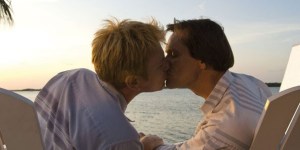 Pic 1: The “I Love You Phillip Morris” movie poster
Pic 2: Jim Carrey as “Steven Russell” and Rodrigo Santoro as “Jimmy”

“I LOVE YOU, PHILLIP MORRIS”: The Incredibly True Adventure of Two Men in Love

If you‘ve always fantasized about seeing funny man Jim Carrey in an explicit gay sex scene, lounging around in black mesh underwear, and sucking face with fellow actor Ewan McGregor, then your chance has finally arrived. In the based-on-fact (believe it or not) black comedy “I Love You, Phillip Morris”, Jim Carrey plays a Jim Carrey-like character named Steven Russell. When we first meet Steven, he’s a Virginia Beach cop with a pretty blonde wife (Leslie Mann) and a seemingly content life, playing the organ at his church and tucking his young daughter into bed every night. He’s also a closeted gay guy, and after surviving a near-fatal car crash, Steven leaves his simple hetero lifestyle and embraces his homo side– in a big way. Before you can sing your best Miss Ross-style “I’m coming out!”, he finds a new life in Florida, complete with a European model-type boyfriend (Rodrigo Santoro) and expensive new tastes in clothes, jewelry, nightlife, etc. He learns what many of us already know: that being gay can be costly. To finance his new jet-setting ways, Steven turns into a fraud artist extraordinaire. It’s only a matter of time before he gets busted and sent to jail. In prison, Steven falls hard for the blond, blue-eyed Phillip Morris (McGregor) of the movie’s title. It’s true love for Steven and Phillip– complete with longing stares, full-on kissing scenes, and the two men slow-dancing to Johnny Mathis’ “Chances Are“. Welcome to one of Hollywood’s most unorthodox– and definitely, most loopy– love stories.

That love story is in danger of reaching “The End” when Steven gets released from prison.  Determined to stay with his demure golden boy at all costs, he opens up an impressive bag of tricks. He impersonates a lawyer to get Philip out of jail. He then finagles his way into a job as a CEO to maintain the two‘s lavish lifestyle when his b-friend is finally sprung. That‘s just the beginning, folks. Both Steven and Phillip eventually get sent back to jail, which sets the stage for Steven’s biggest, boldest final scam. As an audience member, be prepared to be duped in a big, big way yourself.

In the less showy role, Ewan McGregor pretty much dissolves completely into the role of Phillip Morris. As Steve Russell, Jim Carrey is his classically over-the-top self as a man who starts out as just a seemingly needy soul, but whose psychotic tendencies come out full tilt boogie later on. (Think 1996’s “The Cable Guy”.). Carrey still gives us his trademark buffoonery, his rubbery facial acrobatics, and both the physical elasticity and energy level of a ferret who raided the sugar bowl. The movie’s comedic style is very broad; and most of the time, the humor aims for the funny bone of teenage boys.  That said, “I Love You Phillip Morris” has its really spot-on, cleverly funny moments.

Because of its explicit gay content, “I Love You Phillip Morris” has suffered from delays in its United States theatrical release, despite having made over $15 million in Europe and Taiwan so far. Originally set for Stateside release in April this year, it was postponed until July, then delayed yet again until October 2010. So, I may need to rephrase what I said in the beginning: If you‘ve always fantasized about seeing funny man Jim Carrey in an explicit gay sex scene, lounging around in black mesh underwear, and sucking face with fellow actor Ewan McGregor, well… you may have to wait a little longer.