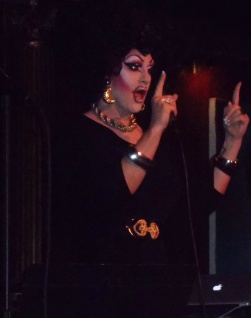 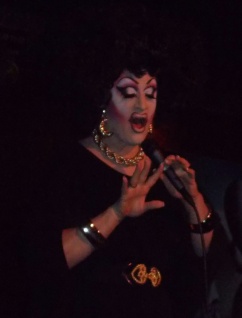 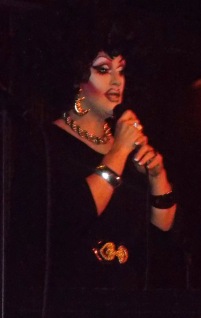 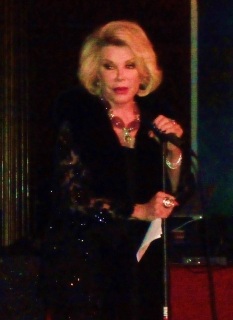 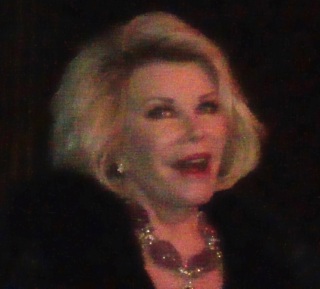 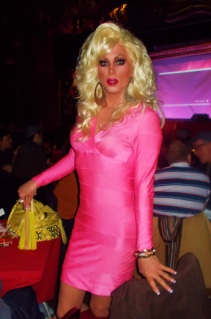 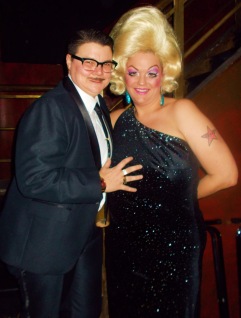 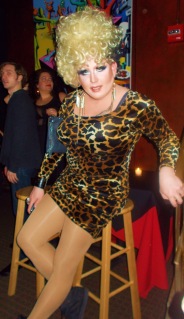 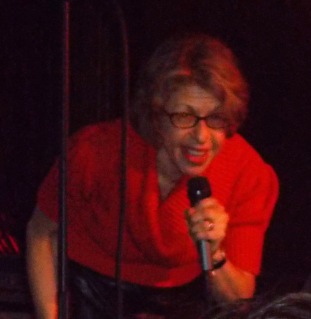 “I want to dedicate this song to Joan Rivers.  It seems like every other day, she’s getting herself into hot water by making a joke that people think is inappropriate.  Well, what the FUCK do you think you’re supposed to joke about?!  Fun stuff?!  Unicorns and rainbows?!  No!  You’re supposed to joke about the ugly stuff.  That’s why we’re still around as a fucking race.  Otherwise we’d all slit our wrists by now– so GET OVER YOURSELF!” Jackie Beat.

In our voyeuristic world where there are hardly any taboos left to shatter, there are some counterculture warriors who still seem hellbent on finding new ways to shock us.  Make that, shock and DELIGHT us…!  Jackie Beat, genderfucking icon of the East Village NYC renaissance of the early ’90s’, knows a thing or two about breaking the rules– and making us laugh in the process.   It’s no surprise that one of her own icons is the hardest working woman in showbiz today, comedian and culture vulture Joan Rivers.  On Sunday, March 3rd, the men of Spin Cycle-– Chip Duckett and Ron Lasko— presented “Hip Hip Hooray: A Bone-A-Fit for Jackie Beat” at New York City’s music hotspot The Cutting Room.   This was a benefit for Jackie Beat’s upcoming, much-needed double hip surgery. And, many of New York City’s most colorful personalities– from the worlds of drag, music, theater, burlesque, and more– came to the rescue.  It was almost like a reunion of many of the movers and shakers from downtown NYC, circa mid-90’s, when DIY fabulousness was the spirit of the day. (Murray Hill, one of the performers that night, even joked, “Everybody in this show tonight were at the peak of their talent 15 years ago!“)  The audience was warmed up by the music of DJ Miss Guy, who knew how to dig out those closet classics just begging to be heard again like A-Ha’s “Take On Me”… and (presumably as an “in joke”) juxtaposing “Jackie Blue” alongside “Hips Don’t Lie”. Hmmm…   It was truly heartwarming and life-affirming to hear such praise for our beloved Jackie Beat throughout the night:

“I’ve known Jackie Beat now for 22 years.  I remember being a little girl.  I was about 10 going to see Jackie on stage with my two moms and being like, “Oh my God!  That’s what I want to do when I grow up– but I want to be FUNNY!”  Sherry Vine
“Jackie Beat needs two new hips.  Well, this certainly isn’t one of those cases of bad things happening to good people!”  Jackie Hoffman
“I’m so honored and happy to be here. Jackie Beat is one of my closest and dearest friends for over 20 years.  I’ve known her since she was a big, fat, drunk, annoying whore– bitter and angry,  I’ve known her when she got skinny and sober– bitter and angry.  Now she’s gonna get two new hips and I’m sure she’s gonna be– bitter and angry.  But I wouldn’t have her any other way.  And I’m here because I think Jackie deserves two new hips.  Do you know how horrible it is going down on somebody and not getting up?” Michael Formika Jones
“I just turned 30 last night, and now I’m doing benefits for friends that need new hips.  Great…” Mimi Imfurst

“She’s the only person in showbiz that I know who actually has a job in Hollywood– and she still has a benefit.  Isn’t that amazing?!” Murray Hill

The show kicked off with Joan Rivers, who Jackie Beat works with on “Fashion Police”.  After poking some deserved fun at the Kardashian sisters, Sarah McLachlan’s ASPCA commercial, and more, Ms. Rivers plugged her brand new philanthropic cause: “If any of you are in a giving mood, and obviously you are because you’re all here to give:  I have a new charity that I’d like you to think about after you’ve taken care of Jackie’s fucking hips!  It’s sex for older people and it’s called ‘Feels on Wheels’.  We go once a month to strangers’ houses, ring the door, and just jerk ’em off!  If you go and do it, please bring a book– because these men are a little older, and it takes a while.”  It was then time for Jackie Beat, who declared, “Believe it or not, even though I have worked with Joan on ‘Fashion Police’ for quite a while now, she’s never seen me perform… so I picked two songs that I think she would enjoy!”  One of those two songs was an oh-so-naughty spoof of Cyndi Lauper’s “biggest and most annoying hit”.  Even though I’m sure Cyndi has a great sense of humor, I  can’t say any more about that one except that Sammy Davis Jr. is clearly rolling over in his grave!

Jackie returned at the grand finale to deliver three more delightfully demented numbers, one of which was Nina Simone’s searing race anthem “Four Women”– but in this interpretation, the four women were Blanche, Rose, Dorothy, and Sophia. OK, Jackie… It’s one thing to make fun of race, religion, and big penises… but The Golden Girls?  Now, that’s TRULY blasphemous!! 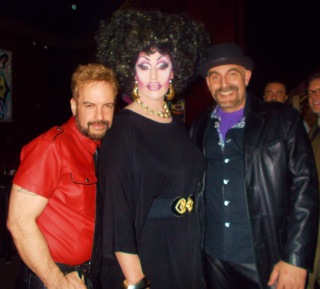 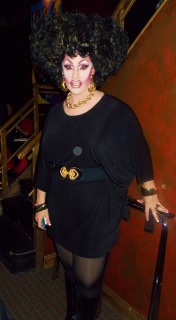 If you couldn’t make the event but still want to donate to the cause, visit http://www.GiveForward.com/fundraiser/8lv1/JackieBeatHipHipHooray for more info.