L.O.V.& E. is in the Air! An Interview With Singer/Songwriter Eric Alán

L.O.V.& E. is in the Air!
An Interview With Singer/Songwriter Eric Alán

“My musical style is simple and direct in production value, infused with electronic dance vibes and driving, infectious rhythms with a Latin flare. It’s expressive, a bit haunting and definitely danceable, cocky and fun.” – Eric Alán

What makes New York City unique?  Well, MANY things!  However, what this writer and culture vulture especially loves about this town most is the seemingly infinite amount of TALENT!!!  That talent comes in all shapes, forms, sights, and… sounds.  It takes a lot to stand out in the New York City music scene in 2013; it requires a unique combination of artistry, sheer charisma, and the ability to showcase yourself.  Latin-American, New York-based singer/songwriter Eric Alán has done just that.  He’s carved a unique musical niche for himself on the ever-enduring and ever-evolving dance club scene… and people are taking notice.  Eric has performed live not only in New York but also in Houston and Miami.  He names Spanish pop/rock artists Moenia, Elefante, Ricky Martin and Paulina Rubio as his influences.  The performer recorded his first two songs “Carcel de Oro” and “Nadie” in Spanish– which shortly thereafter, led to performances in many festivals and night clubs.  Since then, his 2011 English language release “Pornstar” has been on the playlists of influential DJ’s, with remixes by DJ Gomi and Jeff P.  His new single is “L.O.V.& E.”, which Eric has described as “cocky, sexy, and fun with a Latin flare”. The striking video for “L.O.V.& E.” has also been getting a lot of attention as well, largely because of its the video features one of the last screen appearances of late gay porn icon Arpad Miklos.  Eric Alán celebrated the release for the video with a wall-to-wall party at the NYC hotpsot Vlada in March.  The artist is currently dedicated on completing his first full length album, which promises to keep everyone out on the dancefloor.  The sexy singer spoke with me about his music, his icons (including Madonna), and how he plans to keep you moving and shaking!

JR:Hi, Eric. Thanks for speaking with me! So, it looks like “L.O.V.& E.”– the song and the video– has taken on a life of its own. How has the reaction from your listeners and the audience been?
EA: Jed!  Thank YOU so much and I’m happy to be here and chat with you for a bit!  I’m really fortunate to say that both the song and video have received positive reviews.  I think the music and the video delivered a one two punch that has resonated with the audience. I couldn’t be happier about it!

JR:That’s great to hear!  With its pounding beat and high energy, the song is patently designed for the clubs. Is dance music the direction you’re going in with your upcoming album?
EA: Dance music is definitely where my heart is.  However, just as with “L.O.V.& E.”, the album is focusing on minimal yet driving and danceable production values at the core.  I plan to let the DJ’s/producers put their own spin on remixes that will resonate in club venues. 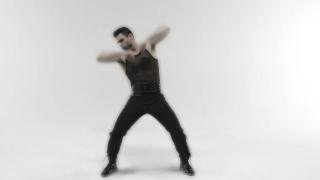 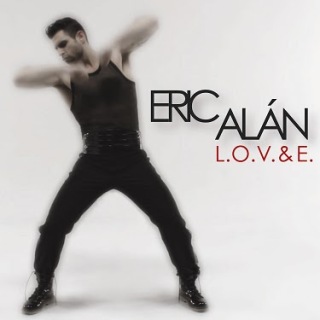 JR:The video for “L.O.V.& E.” definitely has influences of Madonna’s notorious video “Justify My Love” from a while back. Is Madonna one of your influences? Who else inspires your music and image?
EA: Thank you!  I love being compared to Madonna!  It’s no secret to anyone that knows me that Madonna has been a major influence.  I admire her drive, ambition, artistry, passion and longevity in the music industry.  She’s not afraid and despite harsh criticism at times continues to be true to herself and consistently forges ahead. She is an example for ANYONE in the music industry to look up to.

When I was initially coming up with the video concept for “L.O.V.& E.”, the “Take a Bow” video came to mind where you see a barely clothed Madonna rolling around in bed, alone.  I thought to do something similar but take it a step further and add someone else with me in the bed as the song ‘climaxed’.  Not only someone else, but another male.  I definitely wanted to push the gay envelope.

Growing up, music was very diverse in my home.  It ranged from Donna Summer disco to Celia Cruz salsa beats.  I was instantly hooked to anything that I could dance to.

As far as image, influences can come from so many different places. I notice that I like a more classic look but with a twist or a flare to it.  For instance, the look in the “L.O.V.& E.” video is basically a version of a tuxedo.  The twist is the patent leather cumberbund, patent stripe down the pant leg, shear mesh tank top and patent boots….lest we forget the classic “tightie blackies” for the bed scenes. Plus I love just about anything that has sparkle or shine to it. But when it comes to style and image, it’s all about wearing the clothes, not the clothes wearing you.

JR: How true!  Well, the results are pretty damn sexy!  Now, the video also features late adult film star Arpad Miklos (Peter Kozma) in what was clearly one of his last appearances. What was it like when you received the news that he passed away?
EA: Peter.  Before, during and after the shoot I got to spend some time with him.  He was very kind and funny.  He knew what we were filming was for a music video but didn’t know anything outside of our scenes together.  When the video was at about 95% completion I called him up to show him how the whole project came together.  We met on a Thursday afternoon at Penn Station; he was the first one to see the near completed video.  I carefully watched him and tried to gauge his reaction.  His smile from ear to ear made me feel proud of what we did and instantly gave me his seal of approval.  We talked more about the video, what he was up to and a few other things. He congratulated me on the video and told me that he was glad to be a part of it.  We hugged, shared a ‘see you later’ and started walking away from each other.  We hadn’t gotten but 10-15 steps away from each other and I heard him call out my name.  I turned around, our eyes met.  Something in his eyes and demeanor instantly stunned me.  There was a far away sadness and longing that I couldn’t put my finger on.  Then he simply said, “Goodbye Eric.”  That moment will haunt me forever.  Little did I know that was the last time I would see or speak to him again.  I believe it was the following Monday that posts on Facebook  started showing up about the tragic circumstance and that, unfortunately, is how I found out what had happened and it completely wrecked me.  I seriously considered not releasing the video, but instead chose it to be a vehicle for celebration of Peter’s life and beauty, inside and out.  While the video is erotic in nature, Peter appears smiling, warm and beautiful and I sincerely hope that he is remembered that way.

JR: He will be! Thank you for sharing that. So, what’s the hardest part about being an independent singer/songwriter and performer in 2013?
EA: We are living in the age where independent artists in just about any media are on the rise.  I feel like our biggest challenge as a whole would be getting our foot in the proverbial door and having our voices heard.  It’s harder for independents to compete with huge names and the financial backing and marketing that they come with.  For me personally, that just means I have to work a little harder to achieve my goals, which I’m not afraid to do. I’ve done my best to surround myself with some really talented people in the field and I am very proud of the people I work with. I am allowed to be me without compromising my art, freedom of expression and integrity for the sake of a dollar or to please anyone else; it’s very liberating.

JR: (Laughs) How true!  What do you like to do for fun… when you’re not performing or making music?
EA: You know, performing, making music and all that surrounds it IS my fun!!  But aside from that, I really enjoy a night on the town dancing until the wee hours of the morning and I like to travel as much as possible. I enjoy my time in the gym and catching up with my dear friends and family; you know who you are. (Winks)

JR:While we’re on the subject of the gym: It’s clear that you’re very into health and fitness! Want to spill any of your secrets for looking good?!

EA: Good lighting and Photoshop! (Laughs)  In all honesty, it’s just good old fashioned diet and exercise.  I eat as clean as possible and routinely lift and do cardio.  I’m not one for the latest workout crazes or fad diets.  Protein shakes after every workout and cheat meals, however, are essential for results and motivation!  Also, working on an oil rig for 21 days at time keeps me focused on working out.  We have a gym on board so, that’s where I spend most of my free time when I’m away at work.

JR: Well, it’s working!  Lastly, where can we catch you perform next?
EA: Right now my effort and concentration is on completing the album.  No dates for live performances have been confirmed as of yet, but there are definitely some in the works and I will keep you posted!