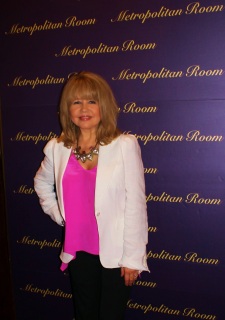 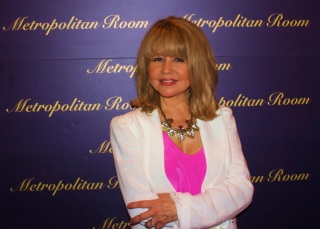 To say that multi-talented entertainer Pia Zadora has had a unique career through the years would be a major understatement… and, in the showy world of cabaret, understatement is rarely if ever welcome!  Thankfully, this diminutive diva knows how to put on a big show even in a small space.  The new show is “Pia Reloaded”, and the venue is New York City’s cabaret hotspot The Metropolitan Room.  Our chanteuse is adorned by a five-man band, and we soon believe that it would take at least five men to compete with Pia’s energy! Shortly after she emerged on the stage in a shimmering white Bob Mackie gown, we were taken by both Zadora’s enthusiastic delivery and by her unblemished vocals.  Her voice still has a generous dose of girlish effervescence and perkiness.  We learn throughout “Pia Reloaded”, however, that this lady can also belt and hit notes in a way that only years of training and experience can allow.

Zadora’s career, which started in childhood, has seen some moments of envied accolades as well as some merciless attacks by a few pop culture observers and critics.  Looking back, it seems that Zadora– who now calls Las Vegas her home– has a sense of humor about the so-called “low” points of her long and multifaceted journey of stardom.  We can’t help but wonder if her choice of opening song, the priceless gem “But Alive” from the 1970 musical “Applause”, was answering the skeptics before they even got to ask “Is she still around?”:
“I feel wicked and wacky and mellow;
Firm as Gibraltar and shaky as Jello;
But alive, but alive, but alive!
I feel half Tijuana, half Boston;
Partly Jane Fonda and partly Jane Austen;
But alive… that’s the thing, but alive!”
That aforementioned sense of humor, we learn, is a big part of Zadora’s stage persona.  Yet, if anyone in the audience entered the theater with any question about her musical skills (or whether she can expertly take on and hold those challenging notes…), they can rest assured after that dynamic kickoff. “But Alive”, incidentally, is only one of many songs in the course of the show which seemed hand-picked for Pia.  Later on, she shifted from her trademark kittenish delivery to a feverishly romantic tone with the bossa nova “Day by Day”.  She reached some awe-inspiring heights with the next one, “Summertime”, which segued into the emblematic torch song “Cry Me a River”.  Pia’s voice took on an ethereal, almost narcotic quality– starting out as hauntingly maternal and progressing to seductively world-weary.  She switched to an upbeat jazz tone for the beloved finger-snapper “All of Me”, and then gave us the classic “The Man That Got Away”.  She even took on Billie Holiday’s “It’s the End of A Love Affair”.  It’s at this point that this reviewer realized how Zadora frequently offers a refreshingly raw, earthy quality to the more mannered and restrained versions of these oft-redone classics.

We were then treated to a wardrobe change! This time, Pia took the stage in a sparkling black minidress and feather boa.  More songs followed, including a sexy, sassy “The Lady is a Tramp”, and a musical tribute to the city she loves so much: a sound collage climaxing with the timeless Big Apple anthem “New York, New York”– no doubt a nod to one of her mentors, Frank Sinatra.  With a wide variety of songs which included some jazz, some rock, and some standards, what else was left?  Opera?  Yes, boys and girls, we got to hear some of that too… with, of course, the story behind it!

The charm of “Pia Reloaded” is not solely Zadora’s musical abilities. There’s also her amazing rapport with the audience. She occasionally sneaks in some humorous asides about her life and career during her songs.  In between the numbers, she shares anecdotes about her childhood (She grew up in Hoboken, New Jersey, when it was known as “the stinky place” before becoming “the new New York”!), her marriage (She’s married to Las Vegas policeman Michael Jeffries, who was in attendance.), and much more. It’s no mystery why Pia Zadora has stated that The Metropolitan Room is one of her favorite venues to perform; the intimacy of the space allows Pia to both sing and “hold court” with her fans.  And… how many shows have you been to where the singer starts a conga line with the audience?  I won’t reveal the big encore of “Pia Reloaded”.  However, I will say that the lyrics and the message behind the song which Ms. Zadora chose to leave us with was perfectly suited for this truly one-of-a-kind star. 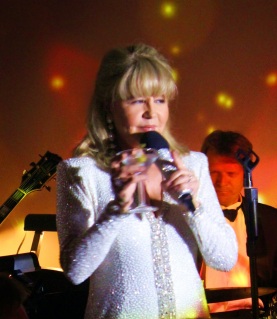 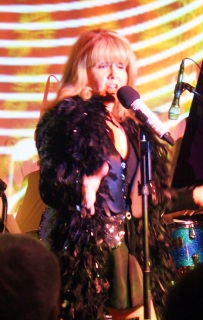 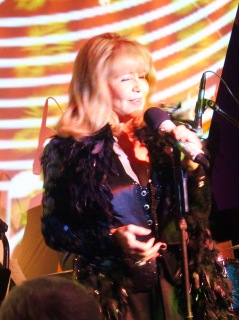