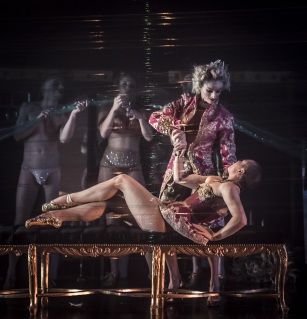 Company XIV‘s World Premiere of “Snow White”, now playing at New York City’s Minetta Lane Theater, is the third and final production of the performance troupe’s current season.  Prior to this new, sexed-up vision of the oft-retold tale, Company XIV brought their avant-garde interpretations of “Cinderella” and “The Nutcracker” to the stage.  Their “Snow White” has been heavily promoted as being patently for “adults only”.  Indeed, there’s lots of suggestive choreography and flesh-baring costumes.  Most of the female cast is titillatingly clad in revealing lingerie throughout the show.  The male characters (“The Queen’s Men”), not to be outdone, are seldom wearing more than G-strings, fishnet stockings, and heels just as high as the ladies’. The first scene gives us an elaborate dance routine entirely dedicated to the famous Wicked Queen and her legendary vanity.  The Queen’s Men– all incredibly built guys with S&M-style ball gags in their mouths– swirl and circle around Her Highness,  holding mirrors and fanning the flames of her narcissism.   The mirrors, capturing the expertly timed lighting, seem to take on a life of their own.   All this pageantry unfurls before we even hear those famous words “Mirror, mirror, on the wall…” for the first time!  The Queen then goes on to perform a sexually-charged, gravity-defying dance with her virile subjects.  However, as we all know, there’s a younger, raven-haired beauty waiting behind those fancy curtains on the stage– and Hell hath no fury like a Queen scorned.

“Snow White” was first published by The Grimm Brothers in 1812– and as we enter 2016, it still remains one of the world’s best known and most beloved fairy tales.   The enduring story of the titular princess has been re-imagined and reinterpreted dozens of times throughout history,  but it’s a safe bet that it was the 1937 animated version by Walt Disney remains the most widely known, enjoying its transgenerational appeal 79 years later.  In the original story, the Wicked Queen actually attempted to kill Snow White three times, unlike in the Disney version where she tries only once with the iconic poisoned apple.  In only one example of Company XIV keeping with the Grimm Brothers’ original darker version, the audience gets to see Her Wickedness attempt to kill our heroine three times: the first by a corset being pulled too tight, and the second by a poisoned comb.  Both these failed attempts become a chance for the hardworking cast to give us some superb– and at times, superbly funny— original choreography to the classic novelty song “A Corset Can Do a Lot For a Lady” and to a brooding version of Britney Spears’ “Toxic”, respectively.   But there are many more decadent delights in this two-hour show.  Just wait until the circus “comes to town” in the Second Act…

Thanks to the unique directorial ornamentations of Company XIV’s Austin McCormick (who’s also the troupe’s Founder/Artistic Director), this truly irreplicable vision of “Snow White” unfolds as a surreal, genre-defying spectacle– with sex appeal, humor, and Grand Guignol in mixed proportions at different times throughout.  Those aforementioned directorial ornamentations, incidentally, include meticulous attention to details in both the costumes and the elaborate set pieces; It seems like no expense is spared for maximum visual impact.   Lighting and video effects, and even puppetry, are deftly incorporated into the production.  The result is a multi-media experience which, true to Company XIV’s intent, seems both cutting-edge and vintage at the same time.

Despite the many musical indulgences, one song you (mercifully) WON’T hear in Company XIV’s “Snow White” is “Someday My Prince Will Come”.  However, those hoping for the story’s traditional happy ending won’t be disappointed.  True to Company XIV’s traditions, the climax comes complete with a gender-defying twist.  And as for the scene-stealing villainess?  Here’s a hint: Her fate is faithful to the original Grimm Brothers’ “Snow White”.  And let’s just say that revenge is a dish best served, in this case, burning.

(All photos by Mark Shelby Perry)