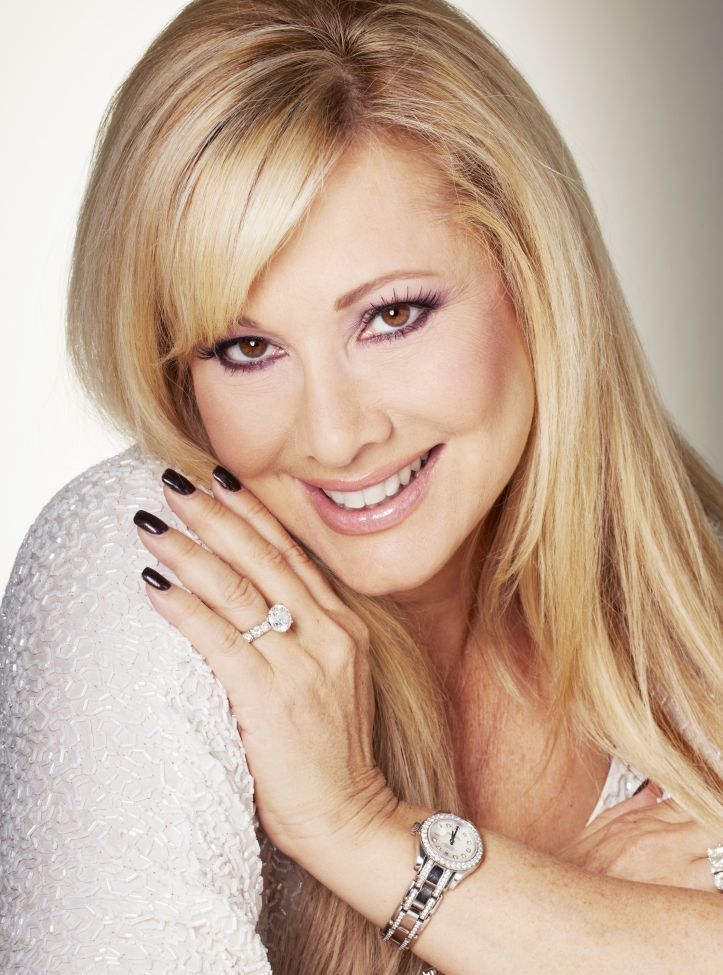 Rhonda Shear has a story to tell!  The model-actress-comedienne-businesswoman-designer-philanthropist-political candidate (Whew!) can now add “author” to her diverse resume. Named after the successful USA Network’s ’80’s/’90’s B-movie show that Shear hosted (ushering countless numbers of teenage boys into an early puberty in the process, no doubt!), her new book is named Up All Night: From Hollywood Bombshell to Lingerie Mogul: Life Lessons from an Accidental Feminist.  In a culture where so many celebrity autobiographies come and go, Up All Night is anything but just another skin-deep portrait of a Hollywood sex kitten.  Indeed, there are many titillating anecdotes about her fellow stars (and even a politician or two!), as well as many eye-popping photos within the pages.  But Shear’s book is also deeply personal, provocative, insightful, inspirational, motivating, and busting with unflinching insight into the experience of being a woman in the entertainment business. Shear tells her unique story while vividly bringing to life the American pop culture landscape that surrounded her through the years.  Best of all, it’s fun to read, with Ms. Shear’s smart, sassy sense of  humor infiltrated throughout.   Like so many young women, teenage Rhonda wanted to become a performer, and she was determined to fulfill her dream.  But even before her  plane landed in  Los Angeles in 1977, this girl’s life was anything but ordinary. Raised in New Orleans, Shear was a frequent winner of beauty contests (She won three Miss Louisiana pageants.), a model, a candidate for New Orleans Register of Conveyances, and even the the subject of a good old Southern scandal:  Named “Queen of the Floral Trail Society”, she was stripped of her title after appearing in Playboy— fully clothed! Shear realized early in life that there was power in beauty, but she used it cautiously.  Unlike many of her peers, she never succumbed to the casting couch when she dealt with Hollywood’s infamous sexual status quo.  In her own words, “It was more effective to be alluring, seductive, and just a little bit out of reach.” Unlike so many beautiful women in Hollywood who try to distance themselves from being called a “sex symbol”, Shear embraced the role.  She frequently appeared as the all-American man’s object of desire in so many classic TV shows through the late 70’s and ’80’s (from Happy Days to Three’s Company to Married With Children).  There’s even a post-Hollywood style Lifetime Television for Women-style happy ending: In 2001, Shear was reunited with her handsome junior high sweetheart, Van Fagan, after over 20 years.  The two married and started their own business together.  Interestingly, the charismatic actress would find her most lucrative endeavor– and her longest steady gig in front of a camera — with Home Shopping Network. In 2010, Shear designed the Ahh Bra, and the product was an overnight success. The Ahh Bra was the number-one selling bra worldwide, with over 35 million bras sold internationally.

Rhonda Shear’s Up All Night: From Hollywood Bombshell to Lingerie Mogul: Life Lessons from an Accidental Feminist is now available in hardcover and Kindle editions.  Also visit www.RhondaShear.com and www.RhondaShearSpeaks.com.