Spicy Witch Productions’ deep, provocative, and occasionally darkly humorous drama Merrily, Merrily, written by Iris Dauterman and directed by Victoria Teague, takes place in two concurrent settings. One of them is a psychiatric facility (Never say “nuthouse”!) for teenagers.  The other is a “typical” suburban family home, complete with the soft-spoken but no-nonsense Mom (Veronique Jeanmarie), the patient and tolerant Dad (Nick Bombicino), the harmlessly indifferent son Andrew (Stephen Zuccaro), and the sassy daughter Rose (Isabelle Russo).  The play shifts fluidly between the two different environments, but the two contrasting milieux are about to meet in a big way.  The suburban family is called to order, complete with Mom’s homemade zucchini muffins, to discuss the “big event”: The parents are preparing for their 17-year old adopted son Stephen (Dani Martineck) to come home after 10 years of having been treated (Never say “locked up”!) at that aforementioned facility.  Interestingly, the high-spirited, F-bomb dropping Rose didn’t even know that Stephen was actually her adopted brother; she thought he was merely an “exchange student”.  Andrew remembers Stephen for very different reasons… Needless to say, the anticipation of the upcoming reunion is causing a tense atmosphere on the home front.  The parents are concerned about how Stephen’s return will affect them and how he will affect their neurotypical (Never say “normal”!) children.

Meanwhile at Tower Psychiatric Facility, we meet Stephen, the Polish orphan who was adopted and then sent away from his American home at age seven.  He’s charming and clearly intelligent, with a smartly sardonic sense of humor and, to put it mildly, a way with words.  Stephen is able to write the perfect college admissions letter while simultaneously offering the insight: “College essays are just an exercise in jerking off an institution until they jizz financial aid all over you!” On the flipside, Stephen also has the tendency for stormy outbursts and occasional violence, which was largely the reason why he was “dismissed” from his adopted family as a child.  As we later learn, he may also may plagued by hallucinations.  Stephen’s surrogate “parents” at the facility are the soft-spoken but no-nonsense doctor (also played by Veronique Jeanmarie) and his patient and tolerant therapist (also played by Nick Bomicono). While Stephen’s adoptive family is wary about his release, the troubled teen is eager to go home, if for no other reason than to be out of an environment with bathroom doors that don’t lock, having to open his mouth to prove that he’s swallowed his “horse pills”, and the sounds of heads banging at night.  Like the pathway of Stephen’s psychological convalescence, the journey to this newly reworked family’s path to so-called “normalcy” is slow and anything but straightforward, with many bumps and steps backward along the way.

To Merrily, Merrily’s credit, playwright Dauterman has done extensive research on the experiences of well-meaning families who chose to adopt from Eastern European orphanages, a wave of which was apparently stimulated by the collapse of Communism in the 1990’s. When these parents-to-be adopted these adorable Caucasian children from the former Soviet bloc, many of them were not prepared for dealing with the children’s psychological scars from a severely impoverished, possibly abusive early environment– which often manifested itself as emotional and behavioral problems later on.  It’s a phenomenon that is definitely worthy of greater exploration in the world of theater, and it’s both sensitively and smartly explored in Merrily Merrily.  Our main character Stephen is indeed complex: endearing but volatile, intelligent yet emotionally fragile, and inspiring both sympathy yet trepidation by the audience.  The character is played amazingly well by dazzling actor Dani Marineck, who’s a revelation.  Stephen may be branded as the “crazy” one, but his insight to his surroundings are much more keen than many of the adults around him.  Put another way, he sees right through the bullsh*t.  The actor gives the character an infectious “bad boy” charm which, we suspect, may have been Stephen’s survival mechanism for a decade at the Tower Psychiatric Facility. Jeanmarie, Bombicino, Russo, and Zuccaro all play dual roles with admirable ease, with their characters’ transitions marked by only the slightest of wardrobe adjustments.  Intentionally or not, the actors’ parallel personas appear to merge together as the play progresses, possibly to show the audience how they fuse together in our protagonist Stephen’s head.  Jeanmarie and Bombicino offer particularly sensitive portrayals in their dual roles: Great examples of this in the play are when Mom has a heart-to-heart sit-down with her feisty daughter about why Stephen was sent to the facility, or when Mom and Dad discuss their concerns about their former “good cop/bad cop” roles and how their estranged son’s return will affect the family. 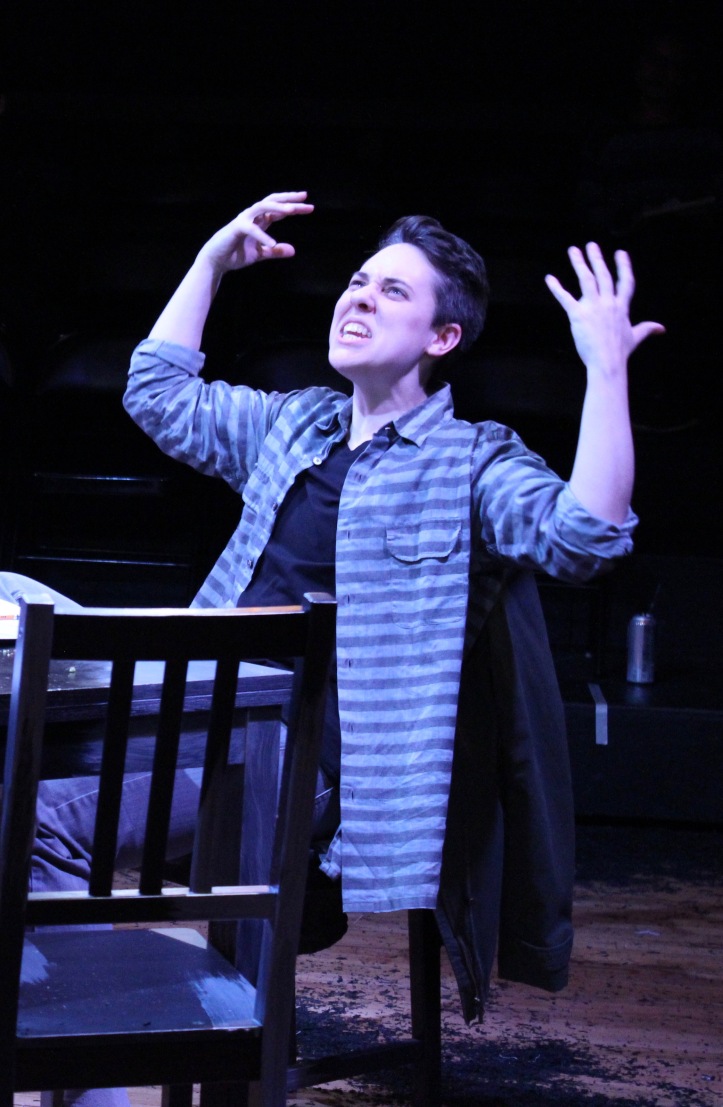 Merrily, Merrily deals with a challenging subject matter, and therefore the play is a challenge for both the actors as well as the audience.  The actors meet the challenge very well. Given the play’s themes, we can’t expect the luxury of a happy or even a tidy ending.  As we the audience become engrossed in the story about this family, however, we believe that we at least deserve the promise of a glimmer of hope for the characters’ future.  Merrily, Merrily ultimately honors that promise at the play’s conclusion, but it also makes sure that we feel the characters’ pain (particularly that of Dani Martineck’s Stephen) along that journey.
Spicy Witch Productions’ Merrily, Merrily continues at The Flamboyán Theater at The Clemente, 107 Suffolk Street, New York City, through April 15, 2018.  The play is running concurrently with Spicy Witch Productions’ Life Is But a Dream.  (See both for maximum effect!) To purchase tickets, and for more information, visit www.SpicyWitchProductions.com.