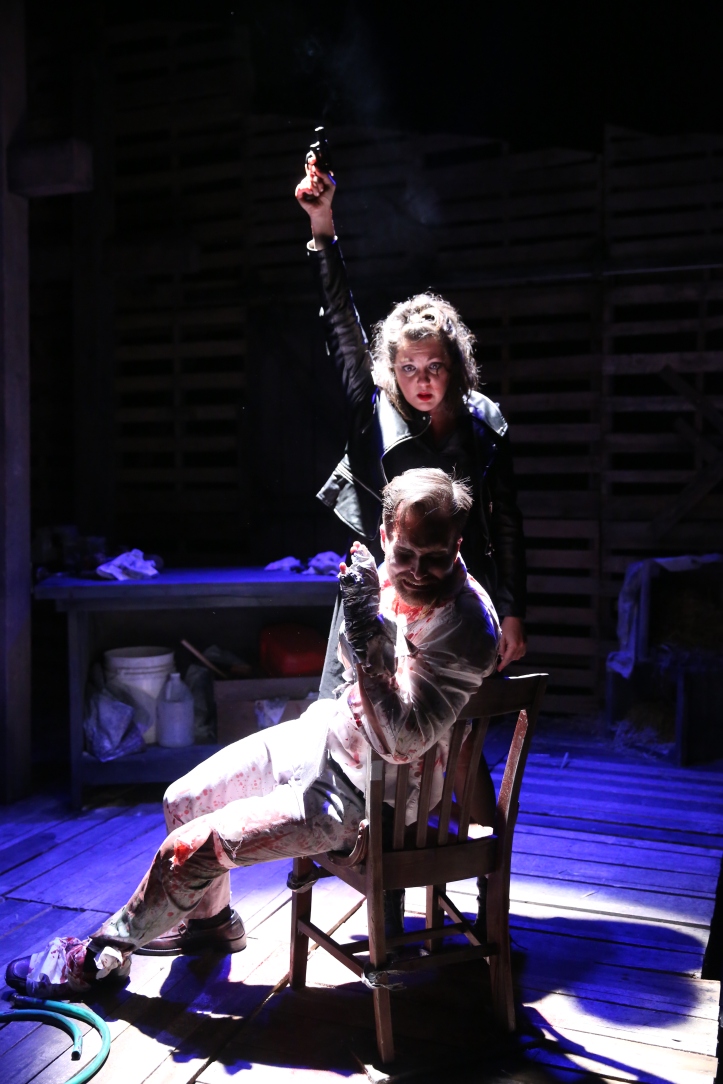 Directed by Melissa Firlit, J.C. Ernst’s dark comedy/crime drama/thriller Goodbody doesn’t take long to get the action going.  The show literally starts off with a bang– a gunshot bang, that is.  After the stage lights go up, the audience doesn’t have to wait for anything to happen… because, well… something clearly has happened already.  A young poker hustler named Spencer (Raife Baker) is sitting in a chair in a seemingly abandoned barn in an isolated upstate New York location.  He’s barely able to move, thanks to a busted knee and an arm splinted with duct tape.  Our unlucky guy is also bruised and covered in blood– which perfectly matches the blood on the walls, on the floor, et cetera.  Believe it or not, Spencer is the lucky one– because over in the corner of the barn is another guy who’s in even worse shape: Bert O’Leary, one half of a pair of Irish mob brothers.  This poor sucker is dead, with a bullet hole in his head.  As mentioned before, something sinister has happened.  The audience, however, doesn’t get to find out just what it was anytime soon. A big clue should be Marla (Amanda Sykes), the woman hovering around the upper loft of the barn. She’s got in a gun in her hand and an incredulous look on her face.  Sadly, Marla doesn’t remember whether or not she shot the dead guy.  Nor does she remember running over her “friend” Spencer with a car, stitching him up afterward, or even Spencer’s name.  Yep, she’s got amnesia.  The pretty but clueless Marla can’t remember the recent bloody events, although she can remember her pet hamster from childhood very vividly.  And, by the way, there are two big bags of money in a truck outside the barn.  Hmmm…
If this opening scene of Goodbody is starting to sound like a clip from a Quentin Tarantino movie, complete with a generous splatter of “F” bombs and some truly colorful — although not exactly “likable”–characters, you guessed correctly. (There are also influences of David Avery’s 1994 Killing Zoe and the 2000 French film Baise Moi, as well as a cheeky homage to the 1990 crime classic Goodfellas thrown in later on…) Tarantino was known for his renegade cinematic style: his decadent indulgence in on-screen violence, as well as the incorporation of black comedy into that violence.  The oft-imitated filmmaker managed to make the blood and guts look so…. well… stylized.  Indeed, translating a darkly comedic crime story into a live theater piece is a more difficult task, particularly a play with as much physical action as Ernst’s.  With Goodbody, director Firlit gets it right.  First off, she creates a brooding sense of psychodrama, which starts from the moment we meet the mismatched gang-who-can’t-shoot-straight of Spencer and Marla, right on through to the not-for-the-faint-of-heart conclusion.  The director and cast are aided by the scenic design by Matthew D. McCarren, which perfectly takes advantage of the intimate space of Theater C of 59E59 Theaters.  The talented, hardworking cast is also adept at pulling off the play’s many physical stunts and the play’s dark comedy, which is essential for Goodbody.  Yes, you will be laughing among the broken bones, the generous amount of stage blood, and that dead body in the corner. 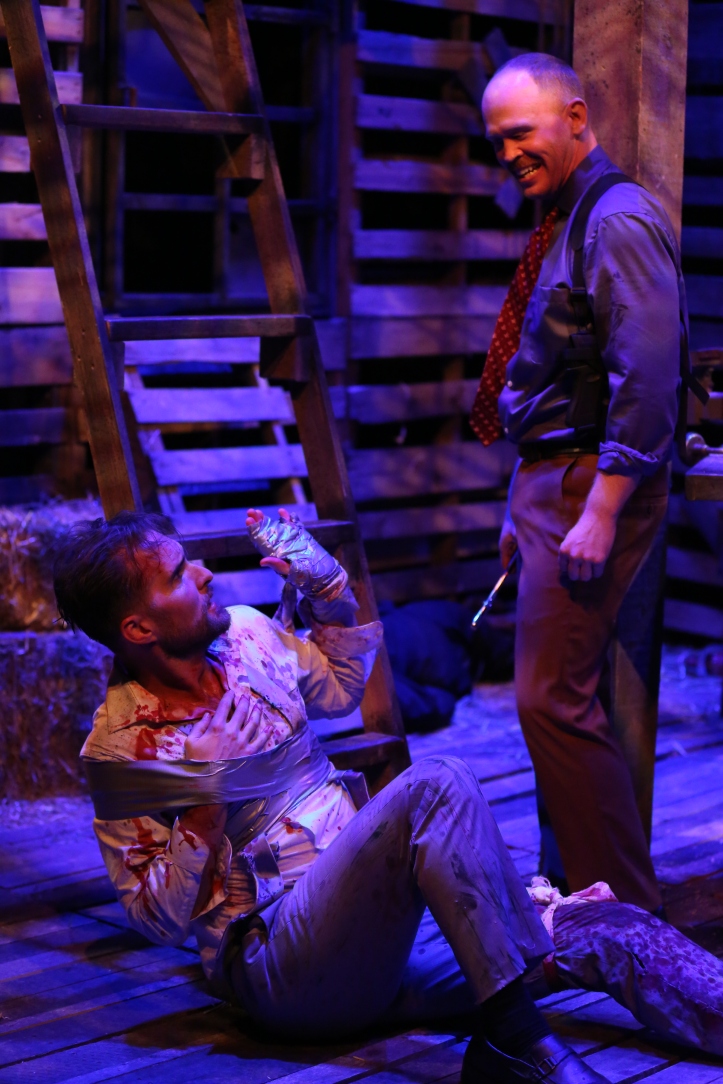 But back to the story…  Just when Spencer finally seems to penetrate Marla’s amnesia-encrusted brain, the pair are joined at the cabin by Charles Aimes (Alex Morf), a dangerously charming childhood friend of Spencer’s who’s now a dirty cop.  Embarrassing childhood stories are told (One of the characters is nicknamed “Twinkie Twat”– and we do get the backstory on that nickname, whether or not you want to hear it…),  and eerie new revelations come into existence.  S-L-O-W-L-Y, the real story manages to unfold.  Well, most of it…  Like Spencer, Aimes also claims to have had a “history” with Marla.  But just who is the “real” Marla?  Is it the sweet woman who wouldn’t swat a fly and can’t even say the word “fuck” out loud?  Or is it the dangerous woman who was apparently a little too inspired by the 1970’s TV icon “Slim Goodbody”, the weird guy in the flesh-colored unitard who taught kids about anatomy? (Hence the “Goodbody” of the title…)  Regardless, the climax of the show finds these three anti-heroes joined by the play’s fourth living character: Chance O’Leary (Dustin Charles), a no-nonsense mobster who vows to seek revenge for the shooting of his baby brother Bert.  Without giving too much away,  let’s just say that an all-out, over-the-top revenge is indeed enacted… but like with everything else in Goodbody, it’s definitely not what your expecting.  We can say that the conclusion of this bloody (and bloody funny) production would make Mr. Tarantino proud– or at least make him tightly clench his buttcheeks.