So, let’s start at the very beginning!
(If your immediate response was “A very good place to start!”, then buy your tickets for Julie, Madly, Deeply IMMEDIATELY!…)

Created by self-proclaimed “Full-Time Julie Andrews Fan” Sarah-Louise Young, the absolutely delightful Julie, Madly, Deeply warmed up the audience at Manhattan’s 59E59 Theater with some of those oh-so-familiar melodies from Dame Julie’s collection of timeless ear candies. We heard selections from Mary Poppins, Victor/Victoria, and of course… The Sound of Music! With the promise of hearing these eternal numbers once again throughout the evening, Ms. Young and her Musical Director/Pianist/Co-Star Michael Roulston already had the audience under Ms. Andrews’ eternally enchanting spell before the dynamic duo even set foot on stage. Some people were even singing along to those classic tunes. (More about “sing-alongs” later!) Even with the warmup music setting the mood, few could be prepared for the sheer over-the-top glee that was ahead for them in this superb musical comedy tribute to one of entertainment’s most beloved leading ladies.

Now playing in New York City after being taken all over the world, Julie, Madly, Deeply kicks off with a medley of music from The Sound of Music, Mary Poppins, and the underappreciated 1967 film Thoroughly Modern Millie. Immediately, Sarah-Louise Young channeled our Ms. Andrews with supreme vocals and an energy level that never wavered throughout the show’s robust running time. Young also inserted her own smart, often laugh-out-loud humor throughout. We were also treated to music from The Boy Friend (Trivia: This was Julie Andrews’ American stage debut.), My Fair Lady, and much more. In between the musical numbers, Young also recreated the story of Ms. Andrews’ truly fascinating professional and personal journey, from childhood to the star’s current legendary status– and it wasn’t, shall we say, always “supercalifragilisticexpialidocious”: “Three fathers, two husbands, five children, numerous awards, interviews, her humanitarian work, snogging Carol Burnett, singing with The Muppets, a life-changing voice operation, taking time out from Victor/Victoria, and having Liza Minnelli step in as her understudy!”… Yes, kids, there’s a LOT of Julie in this show… and that’s just in Act 1! There’s still the story of The Sound of Music— the movie that transformed Andrews into an international movie star– coming in Act 2. (Here’s a piece of advice, Sarah-Louise: If there are any drag queens in the house during a future show, guard that “Sound of Music” dress VERY carefully!) 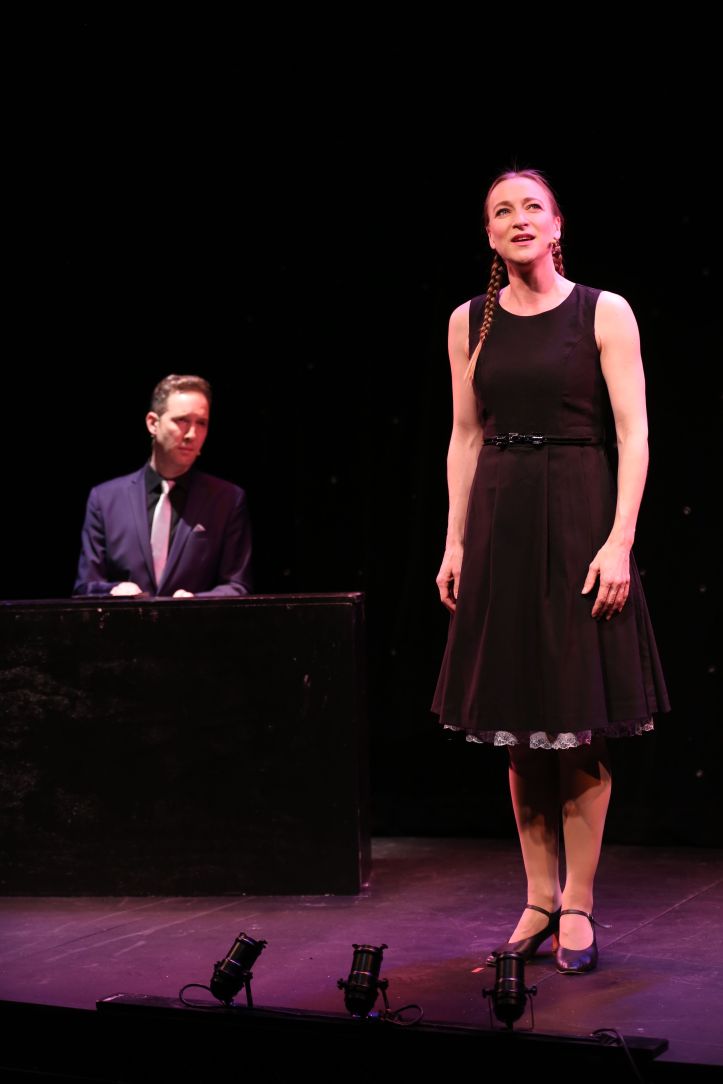 The thoroughly engaging Sarah-Louise Young is a double dynamo: She’s a skilled comedian, channeling her idol’s dramatically mannered persona to perfection and occasionally veering into some delicious camp. (Young even throws in some impressions of Andrews’ friend Liza Minnelli— for good measure, of course!) To restate the obvious, Young is a truly gifted singer as well. As with her idol, the impressive range of notes seem to emanate flawlessly from her throat. A fine example of this is when Young is able to perfectly hit those soaring notes during I Could Have Danced All Night and Feed The Birds— but those are only two examples of many, many impressive musical moments throughout the show. Beyond her skill as a singer, Young expertly channels that essence that made Andrews’ delivery so… well, magical: The ability of that voice to permeate into the eternal inner child inside all of us. Young’s rapport with the audience is also delightful. At one point, she invites the audience to share their own Julie Andrews experiences. (Believe it or not, there was one man at the show I attended who had NEVER seen The Sound of Music.  Oh, the horror!) Both Young and her co-star Roulston’s sheer love of performing is truly palpable.

Periodically, Ms. Young reminded the audience that indeed, she was a huge admirer of our Julie, even sharing a fan letter she wrote to the star as a child. That admiration clearly shows in Julie, Madly, Deeply, and it’s yet another reason that the show works so successfully. Julie Andrews, sadly, lost much of her singing ability after an operation on her throat in 1997. Andrews may have lost that famous voice, but in Julie, Madly, Deeply, Sarah-Louise Young and Michael Roulston have gotten it back for her… and they are sharing it with a new generation.