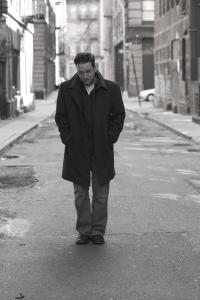 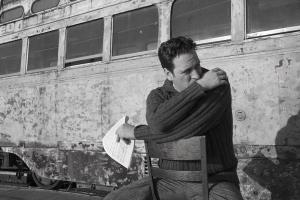 There’s a pivotal moment on Jeffrey Wilgus’ debut CD “Signature” which grabs the audience in a big way.  For this reviewer, it was also the moment when I realized what makes Wilgus’ persona and music stand out from his peers.  It’s the fifth track, Wilgus’ version of Jason Robert Brown’s “Someone to Fall Back On”. The song is far-reaching and almost operatic in tone, and Jeffrey’s vocal chops are a superb match for the music as he delivers:

“I am no prince, I am no saint, I am not anyone’s wildest dream;
But I can stand behind, And be someone to fall back on…”

His vocals are strong, yet his emotions stand bare before the audience.  His performance is
simultaneously grand yet candid– the equivalent of being completely naked, emotionally, on
stage.  More than just a highlight on the CD, “Someone to Fall Back On” has Jeffrey prove that
a performer can express vulnerability and sensitivity, yet still be an empowering presence. On
“Signature”, Wilgus proves this again and again. I’d say it’s a safe bet that many singers,
talented as they are, would be challenged to be able to reach their audiences this way.

But long before you get to the fifth track, you’ll be impressed by “Signature”.  The opening
track, “I Don’t Get (what I give)”, which Jeffrey co-wrote, features an smooth, invigorating sound
with a truly lush groove running through it.  Granted, the CD features some expert production
values (It also boasts the contributions of twelve [!] musicians.  Haim Cotton on piano is a
particular standout.), but Jeffrey’s greatest quality is more innate: It’s his voice. That voice is
dynamic, vibrant, and full of emotion.  Throughout the entire album, he displays an impressive
range, as well as the ability to hold some challenging notes.   Most of all, he has an enviable
youthful quality to his “vox”; as Wilgus sings, we detect something of a blueprint within his soul
for an agenda of upcoming hopes, dreams, and ambitions– creative and otherwise.  That
unblemished quality is perfect, by the way, for when he’s performing songs ranging from Paul
Simon’s “America” to Stephen Schwartz’ anthemic “Corner of the Sky” .  The second track
“Pretty Lies” (from “Taboo”, written by Kevan Frost and George O’Dowd, AKA Boy George) offers a more sparse, stripped-down sound (adorned by delicate piano and violin), which pushes
Wilgus’ vocals to the forefront.  He gives us the feeling that there’s no distance at all between
himself and his audience.  Even as he croons lyrics that could be heartbreaking (“I’m the
loneliest boy… in the world” ), the song avoids being– shall we say– “torchy”, or drifting into
musical melodrama.  This is thanks to an underlying, almost subconscious sense of youthful
optimism in Wilgus’ voice and delivery.

On “Signature”, Jeffrey gives other artists’ songs more than proper justice.  Wilgus’ version
of Billy Joel’s “Summer, Highland Falls”,  is an uptempo, stimulating track. Perhaps as an ode to
the original “Piano Man”, the track features appropriately uptempo, stimulating, (and flawless,
at that!) piano work by Haim Cotton.  Interestingly, even though the singer is not shy of
showing his sensitive side throughout “Signatures”, he takes a cool step back, musically, for his
jazz-flavored version of George Michael’s “Kissing a Fool”. (Michael’s version, as you may
remember, was a bit brooding and perhaps just a bit too, shall we say, intense for some of our
tastes…).  Wilgus does, however, indulge a bit during a unrestrained interlude at the song’s
climax.  Another highlight on the album is Wilgus’ reworking of Culture Club’s “Victims”, which
I always believed was one of the group’s most underappreciated singles.  Jeffrey deserves a lot
of credit for reviving that lost gem of a song, and the audience will agree that he sings it very,
very, well.   The quietly intense “The Answer in Me” is another of Jeffrey’s original works.
Again, Wilgus is able to express his patent vulnerability and sensitivity, yet still sound strong
and empowering.  The song also features palpable feelings of hope and optimism running
through.  Every note seems meticulously chosen, and the end result is truly triumphant.  “The
Answer in Me” is the calling card on Jeffrey’s Wilgus’ debut CD.  Perhaps because they are his
own signature songs, “The Answer in Me” and “I Don’t Get (what I give)” really stand tall.

Jeffrey Wilgus’ voice may be his calling card, but astute listeners of “Signature” will realize
that this album’s success is much more than that.  Wilgus has expertly chosen his musicians,
and has expertly chosen a selection of songs to perform that really work.  We want to hear
more of his original works, and more of the passionate abandon that we hear when the singer
really lets loose at moments of “Kissing a Fool” and “A Corner of the Sky”.   With his talents, we
know that he’s giving us a sneak preview.  People, get ready!
Learn more about Jeffrey Wilgus at :