NOW HEAR THIS! TELL YOUR FRIENDS… about TELLING ON TRIXIE! 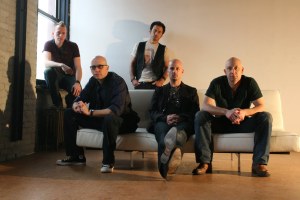 TELL YOUR FRIENDS… about TELLING ON TRIXIE!

Technology is a great thing! Years ago, songwriters kept a notebook and pencil under their bed as they slept, in case they got any ideas for lyrics in the middle of the night. Today, Derek Nicoletto– the dynamic, energetic lead singer of NYC-based band Telling on Trixie– e-mails himself with his I-Phone when his muse calls, night or day. In 2001, Nicoletto met guitarist Brad Small, the man who would become his longtime musical partner (“It’s like a marriage!”, Derek tells me.) Small was looking for a singer, and he complimented Nicoletto in retrospect by saying, “Derek was the only singer who didn’t suck!” Fast forward to 2006, and Derek and Brad’s new band Telling on Trixie was ready for world domination, starting with New York City. T.O.T. got a lot of mileage from their self-titled first album, which was released in March 2007. Two videos of songs from that album, “Halfway Back to Sane” (which featured Jade ColeAsher, who was20born on Father’s Day 2008. I asked new dad if he took a hiatus from making music to concentrate on fatherhood… and the answer was clearly, “Hell, no!” Telling on Trixie, in fact, had just performed at the Bele Chere Festival in Asheville, North Carolina that July. It’s the largest street festival in the country, and the whole city is closed for that event. Telling on Trixie opened for Edwin McCain and Travis Tritt. Asher was in the audience; It was his first rock concert. Derek, likewise, remembers being in the audience when his own dad was on stage. The singer is the son of Tony Nicoletto, a drummer for The Turtles (“Happy Together”) and other bands. “Asher is going to have the same experience!”, Derek told me. What is fatherhood like? “Being a father is a 24 hour gig! It’s amazing and intense.” When Asher isn’t in the audience, he’s usually with his dad in the studio. Derek calls him “a studio kid”. Asher’s influence on his dad’s music, even at this stage, will be preserved on disc forever: One of the songs on the new album is dedicated to him, “Late So Tired.” from “America’s Next Top Model”) and “Orion’s Light”, were heavily played on LOGO’s influential Click List. When I spoke with the out rocker in mid-2008 about the band’s upcoming second album, I had to first congratulate Derek for another reason. He and his life partner DJ recently had a baby: a son named Asher.

Telling on Trixie enjoys a well-earned, close relationship with their fans, which is rare among bands today. Their fans, incidentally, include equal ratios of guys and gals, gay and straight alike. Derek is out and proud,20and Brad and the rest of their bandmates (guitarist Tommy Kessler, bassist Tom Welsch, and drummer Andrew Frawley) are all straight. The band as a whole is very supportive of our community. Telling on Trixie will be performing at The Rally in NYC’s Bryant Park on June 20th as part of Gay Pride 2009. In fact, Derek believes that their bona fide rock sound appeals to many of their gay male fans because for them, it’s a “new” sound– so different from the club and electro-pop music that seems to dominate our nightlife scene. T.O.T. is indie in every sense of the word. At a time when everything in the music biz is changing– most notably how music is promoted and marketed– Telling on Trixie has even challenged traditional notions on the way an album is made. Not only did their fans finance their second album entirely via the website ABandWithaPlan.com, but the site members had a voice in the album’s creation… and we mean the album’s total creation. Even the name of the album, which would eventually be “Ugly, Broke, & Sober”, was decided by a fan– a gal named Valerie. The fans have been participating on many different levels, including such decisions as the album photos. Derek had told me in 2008, “We’re making an album with our fans. Everyone will have a say in the decision-making process. For example, the fans decided that we should have a cover song on the next album.” The=2 0cover wound up being “Mad About You”, which was a hit for former Go-Go Belinda Carlisle in 1986. In addition, the fans actually co-wrote the song “Crash Me Up” with Derek. The video for this song will be reaching the masses real soon. One lucky, very supportive fan actually got the chance to do background vocals on another song on the album. During this whole process, a backstage blog was going on. The album finally hit the streets in March 2009:

“Shooting in 60”, the opener of Telling On Trixie’s second full length album, kicks off with the same probing undercurrent that made Pink Floyd’s “Run Like Hell” and Guns ‘n’ Roses’ “Welcome to the Jungle” sear our memory. There’s the double jolt of powerhouse guitar joined almost immediately by frontman Derek Nicoletto’s equally powerful vocals. Like those two aforementioned songs, “Shooting in 60” deserves to become a rock classic as well. The song, with lyrics like…

… is ostensibly about performing live (or perhaps shooting a music video)– and the track comes as close as possible to capturing that irreplaceable, adrenaline-infused high. As we soon learn, this music is pure rock and roll, boys and girls– with influences from classic anthem rock to nu metal, as evidenced by the track “Your Silence”. This track (think Nine Inch Nails) features a pounding beat juxtaposed against invasive-sounding guitar work– it’s two different moods that merge for one truly unique sound. “Crash Me Up” features a more laid-back style, with easy-going guitar accents and more relaxed vocals by Derek. On every song, Derek’s voice always stands strong. His one-of-a-kind “vox” is full of rock star bravura, very well-suited for the anthemic sound of many of the songs we hear throughout this superb CD. As he covers the range of emotions from pure joy to pure pain and everything in between (including angst, lust, desire,etc.), he often reaches some very impressive heights. The third track is a hard-edged, rock version of Belinda Carlisle’s “Mad About You”. Telling on Trixie transforms the song from a bubble gum-flavored pop tune to a more intense rock song with a unique sense of sensuality running through. It’s not a remake as much as a reworking, with a completely different mood. Even if you find yourself singing the familiar lyrics, the no-holes-barred guitar interval will make you realize that this ain’t an imitation of th e 1986 hit.

“It’s a hell of a morning after, when it’s four days after the day before…” Derek sings on “A.N.F.O.”, and that priceless line really lets us know where we’re going with this track. “A.N.F.O.” showcases Derek-as-bad boy, a role which surfaces every so often– and incidentally, it’s a role he does quite well! “A.N.F.O.” features deliciously self-indulgent, in-your-face lyrics (“Hand me a hammer babe, Give me some good ammo; Hand me the hammer baby, A.N.F.O.”) with a beat to match. Love that killer guitar interlude! (By the way, for those of you who failed chemistry in high school, A.N.F.O. is a widely used explosive mixture.) One of the album’s standout’s is “Eden”. Throughout the history of music, the concept of the perfect paradise– whether we call it Eden, Xanadu, Utopia, or Nirvana– has always been a fertile source of inspiration for songwriters, and this one is truly elevating. “Eden” really recreates the unapologetic joy of forbidden fruit…

… rather than reminding us why the fruit is forbidden. Hell, there’s not one note of guilt in the whole song! The sound of “Eden” is appropriately ethereal and romantic, whether your own private Eden is a garden or inside a hotel room with a “Do Not Disturb” sign on the door. Like that apple, this song is irresistible. Speaking of feverish romanticism, “The Deepest Dive” is a bona fide love song which pushes Derek’s vocals clearly into the forefront. Never before on disc has that voice sounded so tender, with some very impressive high notes thrown in. The sound is invigorating. Another high point on the CD comes with the title track. The hook of “Ugly, Broke, and Sober”, is when Derek croons, “I’m gonna be alright”, a similar message to that of the overused 2005 hit “Bad Day”… but with its frenetic beat and hard-hitting lyrics, this track is a way cooler, more street-smart anthem of optimism. The closing track, “Steps to the Throne”, is a fittingly grand ending that matches what you’d expect from its title. If this finale doesn’t make you stand up holding a lighter high above your head, I feel sorry for you. (And if you’re clueless as to what I mean by that, you gotta start going to a few more rock concerts…)

The predominant vibe running throughout “Ugly, Broke, & Sober” was established with the first song, “Shooting in 60”. The same passion about performing and making music that the band conveys in=2 0the first five minutes is infused in every one of the 10 tracks on the album. For those of us who aren’t rock stars, there’s always the thrill of seeing a really great rock band live. Until you get to see Telling on Trixie live, you can get lots of thrills on “Ugly, Broke, & Sober”!