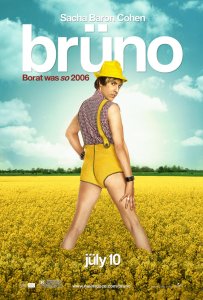 “BRUNO” QUEERS THE BOX OFFICE!
If you’re looking for an in-depth politically-charged debate on whether or not the movie “Bruno”— and its titular main character– is “good” or “bad” for the gay community, look elsewhere.  Reading the Internet circus of opinions that accompanied the film, it made me roll my eyes.  Comedy is meant to be funny: plain and simple.  There needn’t necessarily be an agenda or message.  It reminded me of how to I used to screen John Waters‘ early films (“Pink Flamingos”, “Desperate Living”) to new friends.  How they reacted to the outrageous gay, lesbian, and transgendered characters and the over-the-top situations in those movies made me know right away if we’d stay friends.   So, while the politically correct or uptight– straight and gay alike– were usually “offended” by John Waters’ work, those with a sense of humor– straight and gay alike– loved it and came back for more.  The same is likely with “Bruno”.  “Pink Flamingos” had a guy with a singing asshole; “Bruno” features a talking penis.  Needless to say, “Bruno” is best watched in a crowded theater, where part of the fun is hearing the audience’s gasps of shock and/or pleasure.
“Bruno” is mostly a series of outrageous, in-your-face vignettes, but yes, Virginia, there is a plot:  The flamboyant Austrian fashion correspondent makes the mistake of wearing a Velcro suit to a fashion show, thereby having all the models’ clothes as well as the curtain stick to him… and ruining the event.   Our blond fruit pie is fired from his TV show, and soon afterward he’s also dumped by his diminutive Asian boyfriend.  Desperate to get his celebrity status back, Bruno comes to America with his dedicated “assistant’s assistant” Lutz (Gustaf Hammarsten) and breaks out all the tricks: pushing for his own TV show (His stellar interview is with Brittny Gastineau!), trying to find a “cause” (like Bono), and adopting an African baby (like Madonna).  Nothing works.  Finally, poor Bruno decides that the way to become famous is to go straight, like big American movie stars Tom Cruise, Jon Travolta, and Kevin Spacey!  He does this through “gay conversion therapy” and going on a hunting trip with some seriously menacing-looking hunters in Alabama.  He even going to a swingers’ party– where he barely escapes being eaten alive by a blonde, huge-boobed, even more menacing-looking Amazon of a dominatrix.  The climax comes when Bruno organizes a testosterone-soaked, Ultimate Fighting Championship-style event, with Bruno as “Straight Dave”.  The cage fighting match ultimately turns into a rather tender (but still testosterone-soaked) man-on-man love scene set to Celine Dion’s “My Heart Will Go On”.  Needless to say, the very hetero, very drunk, and very rambunctious crowd goes wild– and not in a “night-in-Chelsea-after-midnight” kind of way!
“Bruno” is half fantasy and half expose on attitudes about gays, mostly in America… although Bruno does travel to the Middle East to insult terrorists and sashay around a group of ultra-conservative Jews while wearing a Hasidic-style hat and shorty shorts.  We’ll never know what’s real versus what’s staged in “Bruno”, which is part of the fun.  We almost feel sorry for former Presidential candidate Ron Paul, after he’s seduced by Bruno in a hotel room and runs away like a scared rabbit. (Bruno got Ron Paul confused with RuPaul!)  There’s no doubt in this homo’s mind that the scene was real.  But at other parts of the movie, it’s less clear: Was Paula Abdul, for example, tricked into being a guest on Bruno’s talk show (and, in the absence of furniture, forced to sit on the back of a Mexican laborer on all fours…), or was she in on the joke? Only Bruno’s anal bleacher knows for sure…

So, if you must have an answer on whether or not “Bruno” is “good” or “bad” for gays, here it goes: Like Borat, Bruno may be a clueless, laughable caricature.  But it’s the homophobic morons, bland celebrities, and other real-life goons that we see in “Bruno” that come across as the real dopes.  At least we know that Sacha Baron Cohen was in on his own joke.  Case in point: The two “gay conversion therapists” in the movie, who indeed are “real”, look like the two biggest queens in the world themselves.  Incidentally, I never watched “The Gastineau Girls”, but I have nothing but admiration for the show’s star, Brittny Gastineau, after she appears on Bruno’s talk show to deservedly diss Jaime-Lynn Spears.  And hell, there’s even a happy ending in store for our Teutonic tart– and we’re not talking about a singing asshole.