SEE IT! WALT WHITMAN’S "LEAVES OF GRASS", WITHOUT IRONY OR CLOTHING 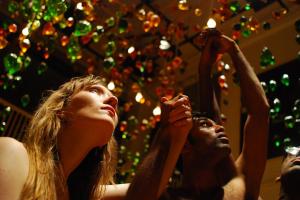 WALT WHITMAN’S “LEAVES OF GRASS”, WITHOUT IRONY OR CLOTHING
Walt Whitman’s Finest Work– In The Flesh!

Walt Whitman was on of the most influential American poets of all time. Whitman’s works were known for often bridging the gap between the transcendental and the “real”. “Leaves of Grass”, the 1855 collection of poems which Whitman spent his entire life writing and then revising, is an enduring cornucopia of literary work… and that work was actually described as “obscene” by some reviewers upon its release for its overt sexuality. Indeed, some passages from the poems of “Leaves of Grass” are directly sexual; others are more subtle and ethereal about sex and sensuality. Whitman’s own sexuality was often discussed alongside his poetry, with most historians confidently establishing that he was gay or bisexual. Like any classic piece of literature, Whitman’s “Leaves of Grass” is always ripe for creative rediscovery. And rediscovery is just what audiences will get with Jeremy Bloom’s bold, vivid new show: “Walt Whitman’s ‘Leaves of Grass’, Without Irony or Clothes”. This performance is done with an ethnically diverse, male and female cast– all naked. The cell theatre, an intimate gem of a performance space in the heart of New York City’s Chelsea, is the perfect venue for this sensual and provocative piece. Through male and female narration, mood lighting, music, and visual projections of Whitman’s words, Bloom’s “Leaves of Grass” offers a very multidimensional interpretation of the once-notorious classic work. Potential theater attendees may be at first intrigued by the idea of seeing naked bodies– especially such beautiful ones as we see in the show– but it’s the beauty of Whitman’s poetry that eventually seduces you, if you’re willing to let your mind absorb the words. Indeed, audiences who are unfamiliar with Whitman’s work will no doubt be surprised at just how progressive the poet was about the human body and sexuality, and how much he recognized the association of the body and the soul.

Jeremy Bloom, the creator/director of “Leaves Unbound”, spoke with Jed Ryan about his “au naturel” vision of “Leaves of Grass”:

JR: Congratulations on the new show. Would you say that you have an affinity for the works of Walt Whitman?
JB: Yes. I first got into him through Alan Ginsburg and through this novel by Michael Cunningham called “Specimen Days.” I started reading “Leaves of Grass” more and more. I usually look for pieces to adapt that are in the public domain. I think that canonized work and old-fashioned work can always find a place here. I thought about doing “Leaves of Grass” somehow, but it’s kind of hard to do, and at some point the idea to have everyone just sort of take all their clothes off came to me, and I thought to myself, “Well, it can’t just be one moment. That’s too, sort of… ‘titillating’! It needs to be the entire thing.” It was a really scary idea, but it seemed right, and we went for it, and I started talking to people about it. It seemed like the people actually would be OK with it. That’s one of the hardest, strangest things that actors can possibly do: to say, “I don’t know what the adaptation is gonna be like, I don’t know what the shape of the piece is gonna be like, I don’t know you, but I’ll put myself out there and put myself in this really vulnerable position.” What happens as a result is that no matter what the audience feels, the people that are making it get really close… and the experience for all of us is incredibly moving, and enriching, and really memorable.

JR: Have Whitman’s work and his legacy been lost a little on the new generation? A lot of the kids today might not even know who he is.
JB: I think when you ask people to picture Walt Whitman, what comes to mind is this sort of stodgy old man talking endlessly about not much! (Laughs) That’s the stereotypical image of him. But when we distilled the text and were able to isolate it and put it in different voices– women’s voices and all different types of people’s voices– it’s clear that his message and what he was saying was actually so far ahead of his times. More than relevant today.

JR: Yeah! Now, would you call the show “performance art”?
JB: I wouldn’t necessarily call it “performance art”. I would call it the simplest way of enacting a text. “Performance art” implies a whole genre of work… and this is more of simply reading the text. I’m still reading it. It’s just the most simple way to do it. It’s not trying to have a political message that’s not already there; it’s just sort of delivering the text. It’s what Walt Whitman, I feel, would have wanted. He asks his reader to undress, to read aloud… so that’s sort of how the idea came about. So, no, I don’t think it’s performance art. I think it’s just the only thing I want to do. It’s the simplest thing in the world. I would be hesitant to call it a “play”, too, ’cause obviously it’s not narrative in that way. It’s just the poem. We’re doing the poem every night, sometimes twice a night!

JR: What’s the reaction you get when you tell people that this piece is done with a naked cast? Do people get shocked, or do they imagine it’s a more, shall we say, “salacious” piece than it is?
JB: It’s hard to describe, because I really want to be sure not to pitch it as something that’s not overly erotic… and when people come, sometimes they’re relieved, almost, that it’s not that way. This is the way it had to be done… and certainly the most beautiful way to spend the summer, you know?! So, people are OK with it. If they don’t want to come, they don’t come! People who know the text are never confused about what it means. We’ve had a lot of really great Walt Whitman enthusiasts and supporters among us. One was here tonight: Greg Trupiano, who runs the Walt Whitman Project in New York; and Jonathan Cott, who writes a lot of books and who is a huge Walt Whitman scholar and who’s been a huge friend of the show. And for them, who know the text by heart, it means more to them.

JR: What do you want people to get from the show?
JB: Number one, I want the audience to feel totally jealous of the actors! That’s the number one thing. But number two, I want the audience to get some kind of comfort about the fact that they’re gonna die. Even though Whitman talks about God and all that stuff, he’s really reducing and distilling the entire universe into the body, into the self. You’re just what you are; you’re here and then you’re dead… and it’s all part of the process. So, hopefully, you’ll start to feel like, “OK, this is simple. You can just stand among 50 people and just have your body there and it’s OK”… and then look back at it someday!

This writer, for one, was jealous of the actors! “Walt Whitman’s Leaves of Grass, Without Irony or Clothing” runs Fridays and Saturdays at 8PM and 10PM, and Sundays, Mondays, and Thursdays at 8PM through August 29th at the cell theatre.
Visit http://www.LeavesUnbound.com and http://www.thecelltheatre.org for more info.