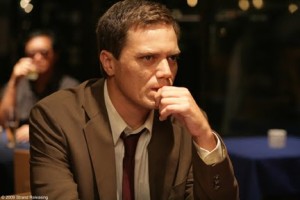 “The Missing Person” marks the first starring role for Michael Shannon since the actor was nominated for the “Best Supporting Actor” Oscar (“Revolutionary Road”) earlier this year.  Shannon can definitely carry a leading role, even if his character John Rosow, P.I., doesn’t strike the viewer as any kind of hero… at least at first.  His character is a hardened,  hard-drinking, retired NYPD officer who’s pushing middle age, and living in rather unappealing conditions in Chicago.  It’s puzzling, at first, why anyone would even hire him as their detective.  He doesn’t even have a camera on his phone, for cryin’ out loud!  Nevertheless, Rosow gets hired to to find the titular “missing person”– a nondescript looking guy (Frank Wood) who’s traveling with a young Mexican boy (Why?).  Later on, Rosow must also return the “missing person” back to his eagerly waiting, long-suffering wife.  The detective’s contact is a young woman named “Miss Charley” (Amy Ryan).   Rosow’s assignment takes him to L.A., and then to Mexico.  Along the way, the movie is populated with a variety of colorful characters that you’d expect to to find in a movie like this.  The final stop is New York City.  It’s in The Naked City where revelations are revealed, true motivations (the lead character’s as well as the others’) are uncovered, and the movie is transported into a very real slice of urban life: the aftermath of some very real New York City modern history.

While the film’s unadorned tone is more grit than glamour, “The Missing Person” is definitely a throwback to 1940’s-style film noir, even featuring many of the characteristics of that genre: jazz music, endless cigarette smoking, characters with cryptic pasts and unknown agendas, voice-over narration by the leading man… and, even a garter-wearing (Garters?!  Do women still wear them?) femme fatale named “Lana” (Margaret Colin).   Shannon’s character and the settings he populates indeed seem to be from another era.  When his John Rosow runs into a dim, scooter-riding mall cop who threatens him with a ticket (for smoking as well as walking in the “wrong” area), it’s something of a jarring effect: two time periods colliding.  Like the classics of the genre which inspired it,  “The Missing Person” moves at a deliberate pace, and may come across as a bit too slow-moving for the popcorn crowd in 2009, where movie-goers’ attention spans have collectively diminished through the years.  But with the movie’s many twists and turns, the payoffs for the audience is definitely worth it… if that audience is willing to hold out for them.  At the risk of giving away any of the ending(s), let’s just say that a new side of John Rosow, P.I. emerges– a much more complex and appealing side than the alcoholic detective who grew on us throughout the film.  We’re eager to see more.  The same can be said of the talented Michael Shannon.