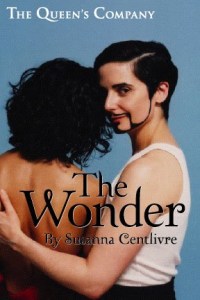 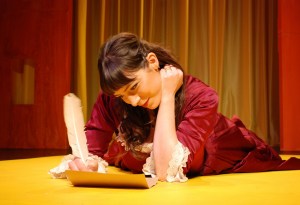 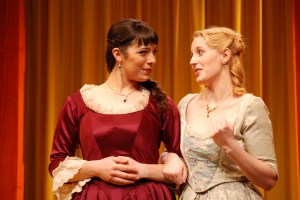 Written in 1714, Susanna Centlivre’s “The Wonder” was a big hit in England and her colonies for over 100 years, before reportedly going out of vogue in the 1800’s when British theater tastes began to change (As some have opined, not necessarily for the better!).  The play even sold out performances in New York City way back in 1768.  Featuring strong-willed women who dared to challenge the powers that be for control of their own destiny (romantic and otherwise), “The Wonder” was obviously considered extremely bold for its time.  Once again ripe for rediscovery, Rebecca Patterson’s new version of “The Wonder” takes the play’s spirit of gender-based equality a step further: All the roles are performed by women.  These are the women of the all-female theater troupe The Queens Company.  For audiences in 2010, the English spoken by these characters may sound a li’l bit differ’nt from what we’re used to, ranging from merely quaint (“I had ocular proof of his ingratitude!”) to almost… well, foreign-sounding.  Nevertheless, the spirit and the sass of the author’s original intentions hold up very, very well… not to mention the modern music thrown in from time to time. (Is that Tina Turner we hear?!) The play runs two hours long, but the hard-working, high-energy cast keeps it moving faster than you these red-blooded male characters can draw their swords.  It’s smart, funny, and occasionally campy (One character states, “You are always gay, Colonel!” to an actress in full male drag… which prompted a hearty laugh from the audience.)

“The Wonder” is set in Lisbon.  Don Lopez (Julia Campanelli), a nobleman of Portugal, is planning to marry off his blonde, willowy daughter Isabella to a rich man named Don Guzman.  Isabella (Valerie Redd), a free-spirit and proto-feminist, isn’t to happy about the situation, and she vows that she’s rather be dead than wed.  When a merchant asks Don Lopez,  “But you have no consideration for your daughter’s welfare, my lord?”, the imperious-acting father retorts, “Is a husband of twenty thousand crowns a year no consideration?  Now, I think it a VERY GOOD consideration!”  He believes that her marriage to Don Guzman will make her “the happiest wife in Lisbon”, but Isabella believes it will also make her “the most unhappy woman in the world”.  Our heroine decides to hide out with her best friend Violante (Abbi Hawk) to avoid the destiny her father has chosen for her, setting into motion a comedy of errors which propels the rest of the play.  Violante, by the way, is expected by her own father to enter the convent, but one look into those bedroom eyes and the audience knows that’s not gonna happen.  In the meantime, Violante has those bedroom eyes focused only on the handsome Don Felix (Virginia Baeta).  Compounding the plot is the entrance of the smooth talking– and VERY horny– Colonel Britton (Maryam Benganga, who’s marvelous), a Scotsman who really loves the ladies.  In contrast to the more mannered Don Felix, the lusty Colonel is much more governed by his, shall we say, “sword” (“Lookye, madam, you must consider we soldiers are not overstocked with money, but we make ample satisfaction in love– then pr’ythee use a conscience, and I’ll try if my pocket can come up to your price!”).  Eventually, The Colonel develops desires for none other than… Isabella.  By the time Violante is innocently hiding the Colonel in her bedroom (while a suspicious Don Felix is sniffing around…), you can see elements of “The Wonder” which were clearly the antecedents of modern British farce.

“The Wonder” may be celebrating its 296th birthday this year, but as the play shows, men and women just haven’t changed that much since then.  The issues of family dynamics, gender, sexuality, and class resonate louder than ever.  The men in “The Wonder” love the ladies, but their love of money is a close rival, which The Colonel, for one, ain’t too proud to admit: “I confess Frederick, women are the prettiest playthings in nature; but gold– substantial gold– gives ’em the air, the mien, the shape, the grace, and beauty of a goddess!”  The actors are so committed that before you know it, he audience is not even focused on the fact that the male players are women with painted-on beards; rather, the gender-bending aspect adds a new dimension to the already colorful characters.  The delights are many: It sure is fun to watch Isabella and Violante giggling like teenage schoolgirls over a love letter by Don Felix.  Actress Natalie Lebet, playing multiple roles, is a comic standout– especially as Gibby, the poker-faced Scottish bodyguard of The Colonel.  As Flora, the wise-cracking chambermaid, Annie Paul has many of the funniest lines; and Abbi Hawk as Violante is no less than adorable. To top it off, there’s also a high-spirited, unexpected finale which, let’s say, comes as a big surprise even for theater literati who may have read “The Wonder” from the first word to the last.  But the big ending doesn’t come before Don Felix delivers one of the play’s most emblematic lines: “For love has taught me to know that every man’s happiness consists in choosing for himself”.  Make that, “every man’s AND WOMAN’S happiness…“!)

The Queen’s Company give a timeless play a truly royal treatment during its visit to New York City.  “The Wonder” is playing through March 14th at The Kirk Theatre at Theatre Row, 410 W. 42nd St. (btwn 9th & 10th Aves).  For tickets, call (212)279-4200 or visit www.TicketCentral.com. ; For more about The Queen’s Company and their work, check out www.QueensCompany.org.