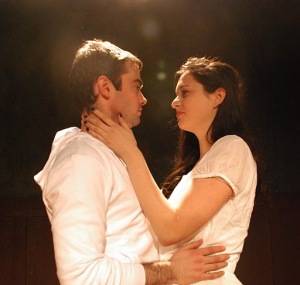 In “La Boheme”, painter Marcello tells his philosopher friend Colline, “Now that you’re wealthy, you must bow to convention!”  That’s just one of the many insightful lines from the original opera that could, in fact, apply just as well in New York City, 2010 as they did in nineteenth century France.  Henry Murger’s novel was written back in 1849, but the message beneath the drama, the tragedy, and the love story (and, yes, the comedy that comes through as well…) of this classic is more timeless and relevant than ever.  At the center of “La Boheme” is the story of young artists struggling to survive in their often cruel urban jungle.  One of the characters deals with survival of the most basic kind, but there’s much more beyond the dichotomy of life and death.  For most of these bohemians, it’s about the centuries-old human challenge to keep your own personal visions and dreams alive. (The moment when a young writer resorts to burning his manuscript to keep warm in the winter is an emblematic scene.)  It’s no mystery why “La Boheme” is so often revived– and reinterpreted– for live performances.  Jeremy Bloom’s avant guarde new vision, adapted by Brian Rady, is spoken rather than sung, the set is minimal, and Bloom doesn’t indulge in elaborate props (A cardboard box substitutes as a stove, the characters drink their “wine” from Dixie Cups, and snowfall is created by one of the actors releasing paper snowflakes from the upper level.) As for costumes, the entire cast is dressed in (intentionally?) mismatched pieces of white clothing.  But there’s absolutely nothing static or sparse about this performance.  It’s lively and fast-moving.  As with his other creative endeavors (Bloom has previously conceived and directed revisionist stage versions of Walt Whitman’s “Leaves of Grass” and J.M. Barrie’s story of Peter Pan.), the director takes a multi-dimensional approach.  He utilizes lighting, music, and most importantly, a fluid choreography of dance-inspired stage movements performed by a large cast of young, energetic boys and girls who really convey their characters’ joys alongside their struggles.  Perhaps to further point out the parallels between the Paris of “La Boheme” to modern life in The Naked City, the director even throws in a few lines from the 1978 hit “On Broadway” (“They say the neon lights are bright on Broadway, They say there’s always magic in the air…”), and Our Mr. Bloom also gives some tongue-in-check directorial touches, like having the landlord Benoit played by a woman.  Rather than seeming like he’s using too much artistic self-indulgence (Not that that’s a bad thing!) , Bloom’s stylizations really add yet another dimension to the whole story, and make the timelessness of this classic even more apparent.

The finale leaves the audience absolutely speechless.  Melodramatic elements aside, however, to conceive “La Boheme” as solely a tragedy is missing the larger picture.  As we learn, poverty can’t hamper love, creativity, humor, or joie de vivre.  And Jeremy Bloom’s simply brilliant theater piece has all of the above.