Death from Laughter at “THE LIVING WAKE”! 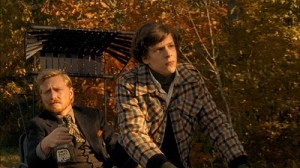 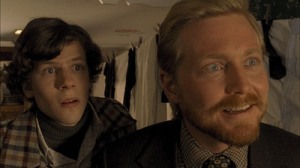 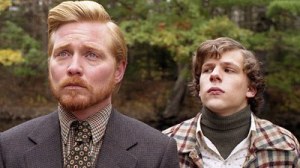 Death from Laughter at “THE LIVING WAKE”!
Sol Tryon’s highly stylized, wildly funny comedy “The Living Wake” begins with a mini-documentary (done in the style of a vintage TV newsflash) about K. Roth Binew (Mike O’Connell, who also co-wrote and produced the movie)– a thirty-something, uber-eccentric who has dabbled in art, writing, alcohol, and insanity. We meet the subject of the documentary soon enough… in living color. (Make that “LOUD living color”!) Binew’s facial expressions– and the wild look in his eyes– are priceless, but just wait until our protagonist opens his mouth. Spouting out idiosyncratic verbal torpedoes with an aristocratic aura, to say that K. Roth Binew is a colorful character is a vast understatement. We also meet Mills Joquin (Jesse Eisenberg), Binew’s “best friend, chauffer, authorized biographer, and poet extraordinaire”. Binew learns from his doctor that he has a “yet-to-be-named, grave disease” and that his days are seriously numbered. The boyish Mills transports Binew around the picturesque countryside on a rickshaw. Along the way, the two invite everybody and anybody to the upcoming “living wake” later that evening, while Binew seeks to satisfy his last few desires. These include a rendezvous with his now-elderly nanny (the “singular love of his life”), a dalliance with a sassy blonde hooker, and Binew trying to make amends with his estranged family, who dismiss him as a crazy embarrassment. His biggest quest, however, is to learn the “brief and powerful monologue” which his late father promised him in childhood but never delivered. All-too-brief apparitions of his late dad haunt Binew throughout the entire movie, but the father finally compensates with a grand appearance at the end of the film– which is only one of the many surprises at the movie’s climactic “living wake”. (Without giving too much away, there’s also a live band, singing, performance art, and more!)
With “The Living Wake”, Director Sol Tryon has created a delicious, Monty Python-esque fantasy world– right down to the music and costumes– where Binew‘s over-the-top theatrics fit right in. (Don’t even bother trying to figure out the movie’s time period or location.) While it’s Mike O’Connell’s show the whole way, Jesse Eisenberg gets some of the movie’s funniest lines and memorable moments as the dedicated Mills. Yes, this is part “buddy movie”, although it’s a LONG way from “Midnight Cowboy”. Highly original, very funny, and ultimately rather poignant, “The Living Wake” is a unlike any other memorial service you‘ve ever been to… but you’ll be glad you attended!
“The Living Wake” opens Friday, May 14th at New York City’s Cinema Village. Visit http://www.TheLivingWake.com for more info and showtimes.