"STONEWALL UPRISING" How A Gay Bar Became the House That Roared 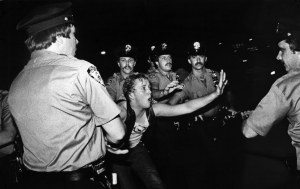 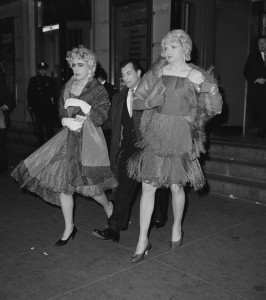 “STONEWALL UPRISING”
How A Gay Bar Became the House That Roared

Anyone who believes that today’s theater and movie audiences have lost their shockability should not give up just yet.  For truly provocative stories and themes, we need look no further than the pageant of American and world history.  In many cases, these real stories are much more affecting than fiction because, well… they’re real!  In Kate Davis and David Heilbroner’s fascinating new documentary “Stonewall Uprising”, the shock and awe experienced by the movie-goer specifically comes in seeing the extreme ignorance and prejudice (and often, downright hatred) that so-called “mainstream America” had toward ten percent of its fellow citizens.  Even more amazingly, the injustices were apparently tolerated by our government, who furnished incredible amounts of energy and resources to persecute the gay community.  And, it wasn’t all that long ago.  This movie focuses largely on how this oppressive atmosphere in both New York City, and the nation at large, made a group of fed-up queers and their allies say  “Enough is enough!” on June 28, 1969.

Based in part upon David Carter’s book “Stonewall: The Riots that Sparked the Gay Revolution”, “Stonewall Uprising” blends archival video and photographs of New York City with lively new soundbytes from a variety of men and women.   We get to see grainy yet still fascinating archival footage of drag queens being hauled into a paddy wagon as onlookers watch.  We see an incredible shot of the corner of Christopher and 7th Avenue, featuring the “Village Cigars” shop that still stands today.  As for the interview subjects, the filmmakers include many people who were actually there at the Riots, as well as such notables as “Village Voice” writer Howard Smith and former NYC Mayor Ed Koch.  The most interesting participant is an elderly policeman who was assigned to raid Stonewall that night. To his credit, the officer does not sugar-coat the incident or revise history; he stands by the reasoning  that he was “just doing his job”.   The most fascinating aspect of “Stonewall Uprising” is the backstory leading up to that fateful night.   Again, the vintage videos speak volumes on how America chose to view gays: We see propaganda films warning “normal” people about the dangers of predatory gay men.  A clip of the 1967 CBS TV “expose” called “The Homosexuals” is shown, where “experts” declare, in a nutshell, that there was no such thing as a happy or well-adjusted homo.  A particularly disgusting segment involved a menacing-looking detective issuing scary warnings about homosexual behavior (“You WILL be caught!”) to children, many of whom clearly were too young to even have any sexual feelings yet.  We learn that since homosexuality was considered an illness at that time, some gay men were sent to mental hospitals, castrated, sterilized, and even lobotomized.  Many were “treated” with aversive conditioning, such as giving electric shock while showing the subject a picture of a nude man.  Other voices in the film speak about the struggles of  being gay at that time.  The idea of “gay pride” or “coming out” was was unheard of.   One of the interviewees is Danny Garvin, who attempted suicide after a dishonorable discharge from the Navy.  Still handsome and affable in 2010, he speaks about how he did not think of himself as gay because to him, being “gay” meant either being very feminine or being an old guy who masturbated in dirty movie theaters.

That’s where Stonewall, the bar, came in.  New York City’s Greenwich Village was a haven for free thinking and creativity in the ’60’s, but even at it’s best, it was as far from “gay” (meaning “happy”) as could be. “It was free, but not quite free enough for us”, recalls one woman.  As one subject pointed out, at least in New York City you could find homosexuals (AKA “twilight people”) and connect with them, if you knew the right places.  Gay bars existed, but they were all hidden, and they were routinely raided.  Queer visibility slowly increased over time.  As it did, however, so did gay-bashing in various forms, from the smashed windows of the famed Oscar Wilde bookstore to outright beatings.  At  its peak, 500 citizens were arrested each year for “crimes against nature”.  In addition, people could be arrested for cross-dressing.  Stonewall was the unintentional epicenter of the gay community. The bar was, according to one subject, “a toilet”.  He adds, “…but, it was a refuge from the street.”   The film proceeds to describe the night in great detail, as well as the aftermath.  Even those who have seen the movies based on the Stonewall phenomenon or who have read the many writings about that night will likely learn a few new things.  Many may not know, for example, that the riots continued for three days after the initial confrontation.  What happened next was steady but s-l-o-w progress: An organized Protest March took place on June 28, 1970.  While 120 people were committed to march, the crowd increased to approximately 2000.  The March became an antecedent to the Annual Gay Pride Parade.  One activist was brought to tears as he reminisced, “That’s when we knew we were ourselves for the first time.”

“Stonewall Uprising” deserves to become a classic; it’s both NYC history and GLBT history caught on film.  So many priceless movements make the film as entertaining as it is educational.  There’s wonderful vintage footage with a blink-and-you’ll-miss-it shot of a drag queen sporting a Barbra Streisand-inspired look.  In the new footage, we meet a charming transgendered woman who remembers celebrating her 18th birthday at Stonewall on that pivotal night.  And yet another lady summarizes the larger issue of human rights and justice when she states,“It’s very American to say ‘This is not right!””

“Stonewall Uprising” has a two week engagement, June 16 through the 29th, at The Film Forum, W. Houston St. (west of 6th Ave.), in NYC. Visit http://www.FilmForum.org/films/Stonewall.html for more info and showtimes.