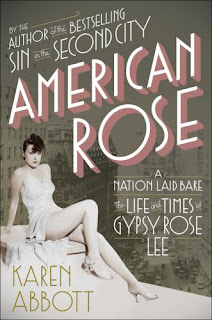 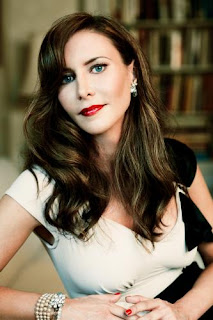 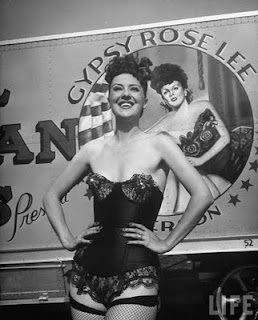 Gypsy Rose Lee & Her New York City… Uncovered!
“You gotta get a gimmick, if you wanna be a star!” As we learn in Karen Abbott’s New book, “American Rose: A Nation Laid Bare”, the late performer/personality Gypsy Rose Lee did have a gimmick, and it did indeed make her a big star. The most fascinating thing I walked away from after reading Abbott’s book, however, was how “Gypsy”– the beloved musical and movie based on Ms. Lee’s memoirs– was indeed a “musical fable”, which was actually how the play was subtitled upon its release. “Gypsy” may have been based on fact, but the sweet-as-honey 1959 stage adaptation and subsequent 1962 movie were neither the whole story nor even overwhelmingly based on fact. “American Rose“ is a biography of the Queen Mother of Burlesque, and it’s also a vivid look at the Golden Age of burlesque in the (ahem) Naked City, from the ’20’s through the ’40’s. Author Abbott handles the two interwoven stories with an unorthodox approach. Chapters bounce between the story of Gypsy’s colorful personal/professional life and the history of New York City which paved the way for her star to rise. The two stories meet somewhere in the middle, when Gypsy Rose Lee strutted into the burlesque scene just when it seemed to need her most. Abbott describes the environment in The Big Apple post-stock market crash: “These days a man couldn’t spare $5.50 for legitimate theater, not even if he wanted to, but for just $1.50 he could see pretty women taking off their clothes– prettier, now, than ever before; all of those aspiring actresses who once dreamt of applause on stage were now settling for whistles along a runway.“ In Abbott’s book, be prepared to meet the famous Minsky brothers. Be prepared to learn about “cooch dancing” and “showing the knish“. Be prepared for an exposé about American sexual mores as our nation inched its way towards the sexual revolution. And… did you know that a G-string was likely named after the lowest string of a violin?

Abbott’s book couldn’t be more timely. If it seems like burlesque is everywhere again, my humble theory is that it’s because we Americans are searching for new ways to appreciate and enjoy our sexuality. Just where do you go in the digital age, where we have lost our shockability, and satisfaction of any sexual craving is available at the click of a mouse? Back to “old school“ sexiness, of course! Many admirers of both the male and female form may agree that performers who leave something to the imagination– some vestige of fantasy— can often be more sexy than those who show it all. (Although I do admit, I’m partial to both!) Put another way, the essence of eroticism is often gauged by what is NOT shown. In addition to skin, burlesque also incorporates comedy into the act, which Gypsy herself knew so well. With its focus on pageantry, spectacle, raunch, a little bit of glamour, and the art of striptease, burlesque had its heyday in the early 20th century before dying out in the 40’s. However, the art form not only survives but is thriving in a particularly vivid underground subculture in New York City, where it is sometimes called “neo-burlesque“. It is vastly appreciated by audiences who are inclined to appreciate it. Performer Dita Von Teese has seemed to have inherited the crown as the new Queen of Burlesque for our time. Julie Atlas Muz is another popular artist who has achieved noted stature in the burlesque world. The regular “Sweet and Nasty Burlesque” shows are one of New York City nightlife’s best kept secrets. Jonny Porkpie, the self-proclaimed Burlesque Mayor of New York, has one of the busiest itineraries in the Naked City.

So, boys and girls, here’s a bit of history: Performer Gypsy Rose Lee (1911-1970), born Rose Louise Hovick, was perhaps the most famous burlesque artist of them all. Her self-styled routines seem tame and even campy by today’s standards. Years ago, however, both the art of burlesque and Gypsy herself were considered to be quite risqué and controversial. Gypsy was branded as a “stripper“, but she was far more than just that. As anyone from her era remembers (and anyone with access to YouTube in 2011 can see), Gypsy Rose Lee’s emblematic act was more “tease“ than “strip“, and she incorporated comedy and smart banter with her audience into the show. She was not considered a great beauty, at least by Hollywood’s monopolistic standards– but back then, she was considered one of America’s reigning sex symbols. Abbott says of Lee: “She was no bombshell; her breasts were small and her rear pear-shaped, but her waist was tiny and her legs epic, two pillars astride the entrance to some secret, exclusive city. Five feet nine and a half inches and 130 well-distributed pounds.” After retiring from burlesque, Gypsy achieved a different kind of success as a writer of fiction (“The G-String Murders” in 1941) and a TV personality. She knew the value of humor, as when a reporter asked her, “What do you expect to accomplish in your cinema career, Miss Lee?” She responded, “I could do straight drama because I believe in stark realism. I could do comedy because I have learned to grin and bear it. After all, a girl can’t be both long-faced and broad-minded. Also, I should be a fairly good imitator because I know how to do take-offs.“ However, Gypsy Rose Lee’s larger-than-life, unique persona did not translate well to the movie screen, partially due to the dictatorial Hollywood standards at the time. Gypsy was not allowed to use her adopted name or even hint at the profession that made her a star to begin with. The star’s biggest mark on pop culture turned out to be her 1957 memoir “Gypsy”, which was adapted into what some people have called the “greatest musical of them all”.

So, how did Ms. Rose Lee‘s real life compare with “Gypsy“, the musical and the movies? Through Abbott‘s book, we revisit the world of “old school” burlesque and nightlife. It’s characterized with some titillatingly darker, grittier details than any movie or play in the ’50’s would depict, and it’s flavored with political and social undertones. We also learn much more about Gypsy’s life. A big part of this is seeing her Mama Rose (Rose Hovick) in a far less sympathetic light than the way she was portrayed by Ethel Merman on stage or Rosalind Russell and Bette Midler in the movies. More than just an overbearing stage mother, she’d be more accurately described as a manipulative monster who may have actually murdered two people. Put another way, she made Faye Dunaway‘s Mommie Dearest look like Florence Henderson.  Nevertheless, Mama Rose was indeed one of the major figures in Gypsy’s life, as was Gypsy’s sister June Havoc— an underused performer in her own right. (Camp movie lovers may know Havoc as Steve Guttenberg’s endearingly doting mother in 1980‘s “Can’t Stop the Music”.) One things for sure, kids: both the art of burlesque and Ms. Gypsy Rose Lee are ripe for further re-discovery… as long as, in Gypsy’s own words, we leave something to the imagination. At least, at first!