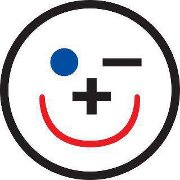 Meet Mr. Friendly. Chances are, you may already have met him– or at least seen him winking at you– at various Leather, GLBT, and/or HIV awareness events around the country. At first glance, Mr. Friendly may seem like just another smiley face. But there’s more to this ambitious character than meets the eye. His plus sign for a nose and minus sign for a left eye represent positive and negative HIV statuses equally, to remind us to show support and respect for ALL regardless of whether they are poz or neg… or unaware of their status, for that matter.  More importantly, Mr. Friendly has a mission– and it’s a grand one indeed. Mr. Friendly’s goals are to assist organizations and individuals worldwide to (1) help them fight stigma of HIV; (2) fulfill their missions to minimize the further transmission of HIV; (3) help them raise funds; and (4) maximize the quality of life for those living with HIV. Judging by the buzz he has already gotten since he made his first public appearance in 2008, it seems like Mr. Friendly is already off to a strong start! 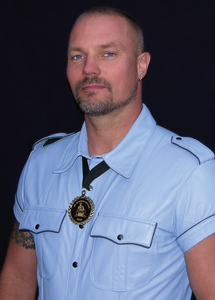 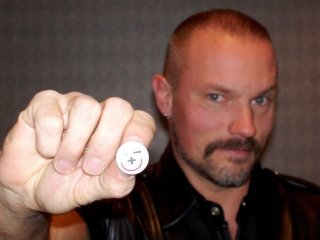 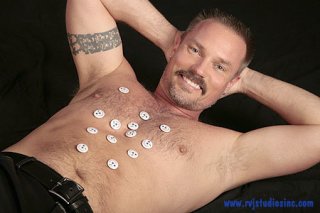 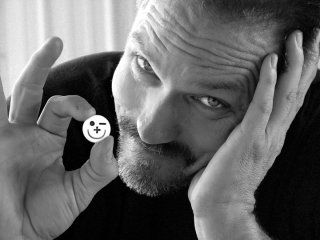 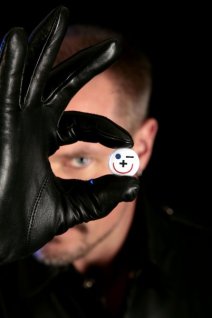 Now meet David Watt, the man behind Mr. Friendly. Once you get past the bluest eyes in Kalamazoo or that killer smile, Dave is always happy to talk about HIV and AIDS awareness. Watt encourages people to display Mr. Friendly, often by giving away free pins to wear on their vests and then giving an impromptu “Mr. Friendly 101” session at events like Cleveland Leather Awareness Weekend (CLAW). He points out that Mr. Friendly was designed specifically to NOT indicate a person’s status, but rather to show support and respect for all regardless of their HIV status… as well as to encourage open, honest, and educated discussion about HIV. Extremely visible and active in the Leather community (He owns the Titles of Mr. Fetish Detroit 2007 and Mr. Michigan Leather 2009), David works as a Prevention Specialist and Volunteer Coordinator for Community AIDS Resource and Education Services (CARES) in his native Kalamazoo, Michigan. CARES adopted Mr. Friendly as a program, offering 501c3 non-profit status in September 2009.

Both Mr. Friendly and David Watt have the same vision: A world without the stigma of HIV. I had the chance to speak to David about the Mr. Friendly movement:

JR: Thanks for meeting up with me, David and Mr. Friendly.  So, David, since you’re the more vocal of the two, tell me how Mr. Friendly was conceived.

DW: For years I had worked on creating a symbol to fight stigma. I wanted to show that I was poz-friendly and to let others know that they could openly discuss HIV with me, no matter their status. Yet I didn’t want a button that exactly said “poz-friendly” since to some that encouraged the question about my own status. Not the point, eh? I’ve seen many friends living with HIV being treated rudely. I wanted to do SOMEthing… Mr. Friendly was carefully designed with equal weight for both a positive and a negative symbol. It is important to me that the symbol is for EVERYone without indicating the person’s status. Poz or Neg, we are all in this together!

JR: Yes, we are! What is the biggest barrier to communication about HIV and between men who have sex with men?
DW: I think there is soooo much stigma surrounding HIV that even just bringing up the topic is perceived to be a turnoff. Poz guys often are rejected just because of their status. One friend told me that he’s turned down for sex 90% of the time once he discloses his status. Many guys just don’t want to know and make assumptions.

JR: If there’s one single thing that you could encourage our community to do when it comes to HIV/AIDS awareness, what would it be?

DW: Let’s all do a better job of initiating conversations about HIV: Promote testing for HIV.  Let others know that poz or neg, you will be there for them. And, be supportive of our friends living with HIV!

JR: Sounds good! So, when it comes to safer sex, it seems like all of us– make that, most of us– know the facts, but we don’t necessarily put them into action. In your opinion, what’s the biggest barrier to safer sex?

DW: We need to find ways to eroticize the conversations that lead to safer sex. When we all figure out what we consider safe, and feel comfortable communicating that, then we protect the health of our community! Mr. Friendly is a great way to initiate that conversation.

JR: There are a few people out there who are known as “AIDS denialists”, who deny that HIV is the virus that causes AIDS, and believe, among other things, that the medications are poison, etc. What’s your opinion on that?

DW: I suggest that people find health care workers that they trust to explain how the virus works. I’m part of an HIV vaccine study called Project Wish from UIC. They do a GREAT job of explaining to me any/all scientific information about HIV.

DW: Let’s face it, many people have unprotected sex cuz it just feels better. Maybe our community is facing condom burnout? And, I think there is a growing complacency about testing positive for HIV. One recently diagnosed young man told me that he knew he was eventually going to contract HIV, was tired of feeling the pressure of testing for HIV frequently, and so he relaxed his standards on condom use. While HIV is now considered a chronic disease, it is still a very serious virus— and a life-changing medical diagnosis. Science is also suggesting that undetectable viral loads greatly reduce risk of contracting HIV. (www.thebody.com/Forums/AIDS/SafeSex/Q201901.html ) But many people who are living with HIV don’t know their status or viral load, due to stigma.

JR: A few guys have shared with me that we get older, some of us may lose sensitivity “down there”– meaning, we lose sensitivity in the penis and it’s harder to “keep it up” while wearing a condom. That may be something of an unspoken reason why so many men may stop using condoms after a while. Any thoughts on that? DW: I am a big promoter of female/Reality condoms for those that choose to wear condoms— I call them the next best thing to barebacking! Mr. Friendly is an anti-stigma message, not a condom campaign though. I recognize that some people may choose to have unprotected sex. Just be sure to do your best to reduce risk and continue to test for and treat (if needed) HIV and other STDs.

JR: That’s a very realistic viewpoint. Now, you are the Holder of several Titles, including Mr. Michigan Leather 2009. What’s the best, or maybe I should say, the most rewarding aspect about being a Leather Titleholder– and therefore, a role model in the community?

DW: Being a Titleholder changed my life. I used to be the shy geek in the corner, now I’m like “Hey, hand me that microphone!” (Does that make me the big geek on stage? YES!) Having a Title opened so many doors for me and Mr. Friendly. And I met so many inspiring people at IML and in my travels! I’m not saying that everyone NEEDS a title to accomplish their goals, but having a title can provide wonderful opportunities for your voice to be heard.

JR: On the contrast, what’s the worst, or hardest thing, about it?

DW: When you put yourself out there with a message, it makes you vulnerable to criticism. I’ve certainly made missteps along the way, but try to do my best. And it can be a challenge to stay neutral so that Mr. Friendly’s message can be heard!

JR: In the media, it’s usually activists who live in New York City, San Francisco, or Los Angeles that get most of the attention. Did anyone ever imply that you should move your work to one of those cities, under the notion that your work would be more “appreciated”?

DW: I live in Kalamazoo, MI – a nice central and CHEAP location! I’m often in Chicago and Detroit (just a couple of hours drive) and do my best to travel frequently. I make it a point to travel all over, not just one region of the US. Europe next? Anyone want to sponsor me? ;+)

JR: Hmmm… We’ll talk about that later! Now, most Americans will never make it to Kalamazoo, Michigan. Why should people go there to visit?

DW: Kalamazoo is a fun, open-minded college town with a vibrant downtown and frequent festivals in the summer months. And my husband’s Barbie/Ken collection is worth checking out!

JR: Looks like a road trip to Kalamazoo is in order! Thanks Dave… and thanks, Mr. Friendly!

DW: Thank YOU Jed for the opportunity… and for promoting Mr Friendly’s message to be stigma-free of HIV! 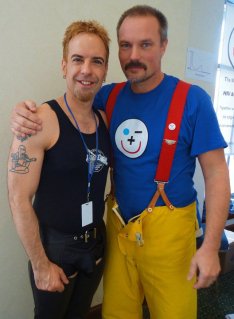 Dave Watt concludes with, “An HIV status should not get in the way of loving ourselves, our friends and family, our communtiy…” Visit www.MrFriendly.info for much more information, Photos, Mr. Friendly merchandise, and– most importantly– how you can help!