THE MALE STRIPPER CHRONICLES: PART 1: DO WE GET TO SEE “MAGIC MIKE”’s Magic Wand? 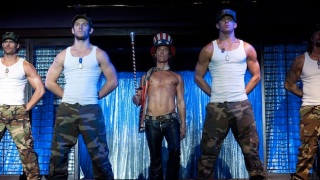 Get ready to see a lot more of man candy Channing Tatum… as well as a cast of other waxed, oiled-up guys in G-strings. Steven Soderbergh‘s “Magic Mike”, a movie about male strippers, is set to be released by Warner Brothers on June 29, 2012. The movie stars Hollywood “It boy” Tatum as well as Alex Pettyfer (“In Time“), Matt Bomer (the TV shows “Guiding Light“ and “White Collar“), Joe Manganiello (“True Blood”), and Matthew McConaughey. McConaughey, People Magazine‘s “Sexiest Man Alive“ in 2005, plays a “retired” stripper who owns the fictional Club X-quisite where the movie takes place.

Yeah! It’s about time that Hollywood explored the lives of male exotic dancers– the guys who so willingly expose, exhibit, and/or exploit themselves on stage for the viewing pleasure of eager audiences… oh, and for tips too. Let’s just hope they get it right. In other words, don’t make it “ShowBOYS” or a male version of Demi Moore’s “Striptease” . Although there have been countless numbers of flicks about FEMALE strippers (Many of which were patently designed for late night cable TV in the ‘90’s…), the movie screen has been strangely neglectful when it comes to the boys who gyrate their pelvises for a living. One of the earliest was actually a 1981 TV movie named “For Ladies Only”. That one starred a then 31-year old, hunky Gregory Harrison as an aspiring actor who starts peeling to pay the bills. This was back in the ’80’s, when male strippers were still considered a “novelty” and were a staple on talk shows. Despite the fact that “For Ladies Only” was watered down for the small screen, I still think that it was one of the sexiest movies I have ever seen. (It may have had something to do with seeing it as a horny 11-year old…) There were a few other movies, mostly forgettable (Remember “Ladykillers“, in 1988, with Marilu Henner?), and there was also “The Full Monty” in 1997, which didn’t even have the benefit of showing us what the title promised … although it did inspire a Broadway musical and infinite numbers of amateur strip shows for charity (“Wow! Now ‘average’ guys can be male strippers too!“). In “Magic Mike”, hopefully the film will take advantage of all that the big screen and a bold director has to offer… which will hopefully include more nudity! But more about that later… The creators of “Magic Mike” have an advantage in casting Channing in the title role. Mr. Tatum, the 31-year old, 6’2” star of such big-budget flicks as “The Vow” and “G.I. Joe: Retaliation”, worked as a fashion model before breaking into acting. Since then, he has been seen in commercials, music videos (Ricky Martin’s “She Bangs”), and on the big screen in both independent and major studio films. But somewhere along the way, the 6’2” hottie also got some… ahem, exposure in other areas of showbiz as well: At age 18, he performed in a Chippendales-style revue called Male Encounter at a now-closed Florida nightclub under the stage name “Chan Crawford” for about a year. Apparently, Tatum is a consultant on the movie, and the movie is loosely based upon his own experiences.

But here’s the question that everyone is asking: Just how much skin are we going to see? Director Steven Soderbergh is no stranger to controversial themes (“Sex, Lies, and Videotape”) or even controversial casting, for that matter: You may remember how he chose adult film star Sasha Grey for 2009’s “The Girlfriend Experience”. And clearly, a lot of the cast has already demonstrated their right to bare more than just arms. Channing is obviously no prude. Joe Manganiello’s naked butt in “True Blood” has certainly delighted fans of that series. And, of course, there’s Matthew “I’m too sexy for my shirt” McConaughey (I’ll resist the urge to mention bongo drums…) However, don’t get your hopes up too high to see full frontal nudity in the new movie. It may not so much be shyness on the part of “Magic Mike”’s creators so much as “accuracy“: Unlike in Canada, there are almost no places in the States where male exotic dancers can show their “magic mikes”… Washington, D.C. being a notable exception. What’s especially sad is that Mr. Manganiello‘s character is named “Big Dick Richie“. Sadly, he won‘t be able to prove it. (Sigh!)