KENDALL: COME AND GET IT! 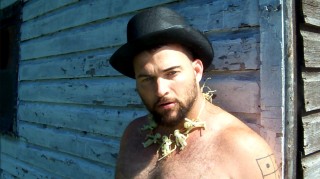 Kendall Kelly is your Bear for All Seasons… and I guarantee, this 5’9”, 215 lb. hirsute hotster could get temperatures rising even in the middle of a Buffalo winter. The popular singer-writer-artist-model, who lives in upstate New York, has made a splash in the areas of music, performance art, music video, and bear-otica. His killer looks– complete with those magnetic cobalt blue eyes– has indeed aroused many a Bear-lover’s carnal desires. An impressive body, indeed… but Kendall’s body of work is equally impressive as well. Perhaps the best example of this artist’s versatility is his brilliant compilation CD “Re-Kindled“. On the album you’ll find a diverse collection of tracks, recorded from 1997 through 2005– with influences of new age, pop, rock, hip hop, and even ‘70’s style disco (“The Booty Song”) throughout. “Re-Kindled” features many fun, high-spirited pieces of ear candy like “G. I. Barbie“ and “Hot Drunk Guys”. Beyond Kendall’s smart and raunchy humor, however, we also get to hear his very impressive vocal skills with some truly beautiful songs like “Without Wings”, “So Unreal”, and “Kyo“. This Bear can sing! Two new CD‘s are in the works. As audiences at events like Bearapalooza will confirm, Kendall is also a dynamic live performer who always knows how to bring the house down– from New York City to Nashville.

One of his most recent and also most serious endeavors is a video on You Tube (http://www.youtube.com/watch?v=VPoNwMrdUNw) where the artist talks openly about being a survivor of child molestation. To date, Kendall’s video has received well over 2,000 hits.

Kendall spoke with Jed Ryan about what makes a Bear a Bear, his upcoming plans for his fans, what he finds sexy in a guy, and much more:

JR: Hi Kendall! Thanks for speaking with me. So, as a bona fide Bear icon, what makes a Bear a Bear?

Kendall: I’m sure there are well over a million Bears or Bear admirers in the world, and all of them have a different definition of what a Bear is. They are ALL correct. It’s not up to me or any one person to determine that. I can tell you what I find attractive in a man but it’s not fair for me to try and put specific traits and attributes onto that definition.

JR: A lot of people may say that the Bear world isn’t really a “community” in the same way that, for example, the Leather community is… that we are just a bunch of big, hairy guys and their admirers who like to drink beer, eat pizza, and have crazy sex. What would you say to them?

Kendall: I believe the Bear “movement” to be a VERY important social marker. It is about men reclaiming their masculinity. Male beauty was measured against the blueprint of female beauty for quite some time, and being a male is important for the survival of our species. Men also have been taught to keep their libidos buried deep and not to “hunt” or seek out sex. Men are built for sex and intimacy, straight or gay. The Bear community serves a huge purpose beyond our individual attractions.

JR: I agree! So, who is your idea of a Bear role model?

Kendall: A man who isn’t afraid of being himself and of his natural proclivities.

JR: You’re a Bear who wears many hats: musician, performance artist, model, actor… Artistically, which of those personally gives you the most satisfaction?

Kendall: Right now I find a lot of satisfaction in editing in general. Music ,videos, photos… Being editorial and creative gives me a lot of joy.

JR: We can all be thankful for that! Now, you live in upstate New York… specifically, Buffalo. A lot of people who live in a place like New York City may have their own preconceptions about what life in your neck of the woods may be like. Are there any misconceptions about your hometown that you’d like to dispel?

Kendall: (Laughs)Yeah… First of all I live NOWHERE near New York City. It’s about a seven hour drive. Where I live is very suburban, not metropolitan like New York. I live in Buffalo, 20 minutes from Niagara Falls and the border of Canada. Being so close to Canada, I have a bit more of a European and even English influence as well as French-Canadian. I always say that crossing the border to Canada is like stepping into a 1970s science fiction movie where people have numbers instead of names. The air is thinner there. They are nicer and less stressed out. The summers here in Buffalo and in Canada are beautiful. Just amazing. The winters, however, usually suck a cold bitter ass!

JR: That would be a great time to find a warm Bear to snuggle with! So, have you ever had an experience where someone has recognized you from one of your magazine pictorials or videos? What was that like?

Kendall: That happens constantly, but almost never outside the gay or Bear world. Here in the States I’ve gotten to a point that a lot of Bears have seen my porn or music videos and it’s really cool. A lot of guys want to have sex and that’s cool. I like hearing people’s opinions of my work, good or bad. The most amazing thing has been people using my work for other things. I just got back from performing at a club down south in North Carolina last weekend. There was this guy who had won a Bear competition. He told me he used my song “Bears” as his talent. I think he was a bit nervous about telling me because he didn’t ask my permission, but I was way flattered. And oh yeah, once this guy my housemate works with found the site cakefucker.com . It’s basically a short video clip of me fucking a cake. That was odd.

JR: I saw it and thought it was really hot… where “American Pie” would have gone if it only had the balls!! Anyway, your body… ahem, of music is very impressive. I am partial to your album “Re-Kindled” from 2005, but which songs or which album would you consider “quintessential Kendall”… in other words, what music must your fans listen to if they want to “get to know” you as an artist?

Kendall: My writing comes from a lot of different places and they all represent me in one way or another. I can tell you some of my favorite songs: “Living in my Headphones“, “It Doesn’t Have to be a Dream”, “So Unreal“, “Bears“, “G.I. Barbie”, “One Sex”, “Kyo”…

JR: What do you like to do in your spare time?

Kendall: Spare time?…Don’t have much of that. I make my work play and my play work…. Any spare time is spent with the husbear or at the gym…or jerking off.

JR: While we’re on the subject: As a bona fide sex symbol, what do you personally find sexy in a guy?

Kendall: I have a wide range of tastes for different reasons. I like chubby guys, hairy, smooth, young, older, shy, aggressive…It really depends on the person. I’m TOTALLY an ass guy. I’m mesmerized by men’s butts. I stare at them CONSTANTLY. Yesterday this husky guy walked into the gym and got on an elliptical. I got on the elliptical behind him and just tried not to faint watching his ass bounce. Fuck, he was hot! I just wanted to bury my face in that goodness! But there can be a lot of things about a guy that just click with me. I’ve had amazing times with men that weren’t even my “type”.

JR: Your work for Bear Films has gotten a lot of positive buzz… and no doubt, a lot of new fans! Was there a particularly hot moment or scene that you remember from your video work?

JR: (Laughs) A lot of guys would imagine that being an actor in an adult film– having sex with a bunch of hot and hairy co-stars while the camera rolls– would be a real sexual turn-on. Is it a turn-on for you?

JR: Casting agents, are you listening? So, Kendall, what surprises do you have in store for us in the upcoming year?

Kendall: I will be releasing at least two more CDs this spring. I also will be releasing my short film “DOT” about working with an autistic person probably within the next month on YouTube or Vimeo. People know me generally for my fun and goofy videos and songs, but I have a very deep intellectual side and love exploring that. The most surprising thing about me is probably that I’m grounded, balanced, and fairly sane.

JR: On a more serious note: You have been very open about having been sexually molested as a child. Do you want to say more about that?

Kendall: Yes, sure. I appreciate the opportunity. A lot of people have had abuse in their childhood or even adult lives. It’s nothing to be ashamed of. I say this not just to other people but to keep reminding myself. It’s a hard thing to escape. I myself was abused on a regular basis. I’ve had a lot of body and self image problems in my adult life because of the abuse. Again, in my late twenties after my ex-partner stabbed me, I went through similar feelings and emotions. I never felt like a physical being up until my late 30’s because I left my body so frequently as a child and then again in my twenties that it was hard to reconnect. It’s an easy thing to say that we should all love ourselves physically for who we are, but it is another to actually get to that place. It is an ongoing process. I hope that anyone who has suffered abuse and yes, those who have abused, can find a place in their lives where they can love themselves and forgive themselves or others. I used to think forgiveness was something you only gave to someone who asked for it. I was angry and hurt and didn’t want to give it to anyone who didn’t ask me for it. But holding on to pain made me pain-FULL. I deserve to be pain FREE and let go of hurt and anger. I have a great life now and wonderful partner. It IS possible to move on and have a fruitful and emotionally fulfilling life.

This story about abuse in unbelievable and inspirational to me – http://www.youtube.com/watch?v=ME2wmFunCjU .

Then go here. This is a foundation co-founded by the same little girl seen in that video. INCREDIBLE!!!!!! – http://www.attachment.org/pages_seminars.php

JR: Thanks for sharing! So, where can your fans meet you in person?

Kendall: Join my Facebook Kendall Kelly fan page(http://www.facebook.com/pages/Kendall-Kelly/214240355311976?ref=tn_tnmn) for updates on my touring schedule, my music, and more.  My new album is called “Truth Changes”.   Also check out www.Bearapalooza.com which I work with a lot. 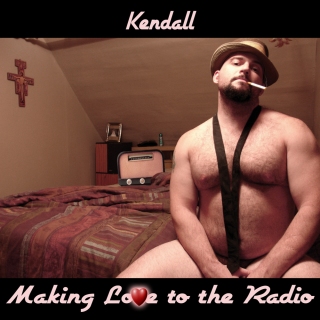 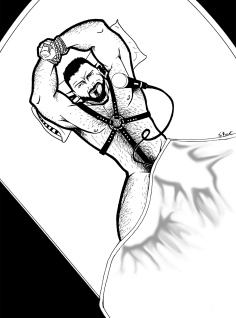 You can also see Kendall live: