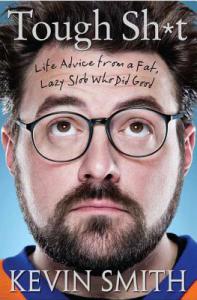 The subtitle of multi-hyphenate (director-producer-actor-writer) Kevin Smith’s new book, “Tough Sh*t”, is “Life Advice from a Fat, Lazy Slob Who Did Good”. Oh, Kevin! Wouldn’t “Mellow Bear With a West Coast Mentality Who Did Good” be better? Anyway, the author’s boy-next-door-style modesty can’t hide the fact that Smith has left his unique paw print on the entertainment biz in many ways… and we learn all about them, from Kevin himself, in this no-holes-barred, wild bumper car ride of a book. This is the 41-year old guy from New Jersey who, after making “Clerks” in 1994, became an inspiration to legions of aspiring filmmakers who learned that they didn’t need the big studios to make their movie. The guy who–17 years after “Clerks”– directed, innovatively raised funds for, and self-distributed the movie “Red State” … with money to spare. The guy who taught people outside the gay community what a “Bear“ is. The guy who made podcasts cool again. And, in the true spirit of DIY artistry, he did it all HIS way. Not too shabby…

It all started with “Clerks”, a black-and-white film with a cast of fledgling actors which cost $230,000 to make. The movie became a Cinder-fucking-rella story of sorts when it was picked up by Miramax and went on to make over three million bucks. (Smith writes that his sister Virginia advised him: “You don’t have to want to be a filmmaker, just be a filmmaker.”. After that million dollar advice, Smith states, “A slacker hit the sheets that night, but the ’Clerks’ guy got out of bed the following morning, ready to do the impossible.”) Perhaps more importantly, “Clerks” became something of a sacred artifact for the indie film juggernaut of the early 90’s– a movement that that would change cinema forever. Smith has directed nine movies since then, with the upcoming “Hit Somebody“ to be the last one…before, as he tells us in the book, he hangs up his director’s hat. Somewhere along the line, the affable auteur discovered– seemingly by accident– that he had a lucrative career in speaking on the so-called “Q&A circuit”. Smith is always guaranteed to have a lot to say: In talking about his life, the audience learns not just about Kevin, but also more about the film biz than a whole semester at NYU Film School. It helps that he‘s so damn FUNNY in person. As anyone who has ever attended a public appearance by Smith can testify, this guy knows how to command attention. Picture a bunch of horny guys watching a peep show, eyes and mouths wide open in fascination (but without the naked chick and the sticky floor…) , and you‘ll get the idea.

By now you may be asking, “Why is he telling us this?” Well, here’s why: Kevin Smith WRITES the same way he talks, from the first “fuck” to the last dick joke. “Tough Sh*t” is an amazingly fun read. In the book, Smith recalls the highlights of his self-styled career, first stimulated when he and a friend drove into New York City in 1991 to see an indie flick called “The Dark Backward“. We learn of his turbulent relationship with Miramax Studios. We learn about the assorted run-ins through the years: with the religious right (“Dogma”), with the movie advertising departments (a rather innocent film entitled “Zack and Miri Make A Porno”), and with the crazy Westboro Baptist Church (“Red State“) among them. He devotes an entire chapter of “Tough Sh*t” to his not-so-fun experience of directing a dour Bruce Willis in “Cop Out“. (“Moonlighting” fans be warned: Smith’s reflections on Mr. Willis may make you forget David Addison forever…)
Before you ask, he also talk about that notorious “Too Fat to Fly” incident in the Chapter “The Sh*t That Happened on the Plane“– an event which stimulated a lot of chatter in the celebrity gossip pages. It also made Smith a hefty hero for those of us who don’t hesitate to grab that second (or third, or fourth…) Twinkie. In one of my favorite passages, Smith also rants against movie critics: “I’m expected to show critics, bloggers, and other members of the movie media my film free of charge. The audience has to pay to weigh in on my art, but the critical crowd? They get a free meal, then get to throw it up in my face, shit in my sink, and head out the door, unscathed.” So, for full disclosure, this critic is revealing that I did buy this book with my own money… and, to make one last nod to “Clerks”, it was the most bang (in a non-sexual way) I got for my buck in a long time!!
Fans will be delighted to know that Smith uses the same deliciously dirty, in-your-face dialogue in the book that we hear in those guy-to-guy conversations in his View Askew movies. How much of this you’ll be able to take may be put to the test with the chapter “My Wife Is the Shit“, which is a very… shall we say, “unique” tribute of devotion to his lovely wife Jennifer. This chapter gets pretty graphic… and given the voyeuristic quality of Smith talking about his own personal life (with V-E-R-Y specific deets about his and Jennifer’s first, uhm… “date”. Ouch!), it may be a little too intimate for some tastes. Still, the perv in me can’t help but imagine the couple’s first consummation of their love being reenacted by a new class of young actors discovered by Smith himself– if and when a biopic about Kevin‘s life is ever made. If that ever happens, expect yet another MPAA brouhaha.

“Tough Sh*t” is available in hardcover and audiobook.