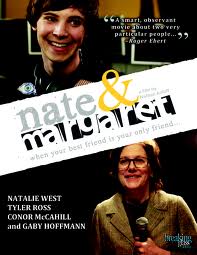 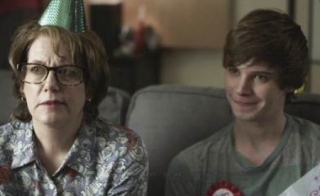 Meet Nate (played by Tyler Ross). He’s a cute, innocent-looking film student, aptly described as “puppyish” by another character. Nate has never yet had a steady boyfriend. One of Nate’s pals is Darla, a wild-eyed, free-spirited party girl (played by magnetic but underused actress Gaby Hoffman). It may seem logical that the shy Nate and the sassy Darla would make a good comedy duo: something of a twenty-something version of “Will and Grace, 2012” set in Chicago. However, Nate’s best friend is not Darla, but rather Margaret, the other half of “Nate and Margaret”‘s title. Margaret (Natalie West) is a self-described “52-year old spinster with a mug addiction and an extensive take-out Rolodex”. She works at a coffee shop but dreams of breaking into the serious world of stand-up comedy, drawing her schtick from her turbulent childhood and non-turbulent love life. One of her bits is “Relationships are hard… I think I should try and find someone I like and have them kick my ass. Then, if I still like ’em, maybe there’s potential. That’s what my dad did, and my mom didn’t seem to mind. In my family, bruises were like kisses. A black eye not only meant that Dad loved me, but that he loved me RECENTLY!” Nate and Margaret make for an odd but devoted couple, riding bikes together and hitting thrift shops (Margaret’s “mug addiction” described above is coffee mugs!) in their spare time. Their idiosyncratic relationship is put to the test when Nate starts dating a sexually aggressive but rather shallow and coarse party boy named James (Conor McCahill). Unexpected emotions and tensions soon come to the surface. The climax of the film occurs when an innocent good deed by one of the characters has unexpectedly disastrous consequences– leading to a fight that threatens Nate and Margaret’s friendship for good.

For decades, many filmmakers have tried to portray the dynamics of the unique friendship between gay men and straight women, both on the big and the small screen. What makes “Nate and Margaret” stand out is that this relationship is nicely real and believable. While director Nathan Adloff does include some crazy, over-the-top supporting characters for good measure, Nate and Marageret themselves are NOT caricatures created solely for laughs– and they certainly are not stereotypes either. Nate is not just another horny twenty-something whose sole quest is to find “Mr Right Now”; and Margaret– although we suspect she may be lonely– is not one of those desperate, so-called “fag hags” that we see so often in movies and TV. Unlike previous incarnations of the same gay man/straight woman relationship story, the friendship between Nate and Margaret is not based around loud shopping trips to the mall or the joint ogling of handsome male passers-by. When the mood of the movie switches from comedy to drama, the characters are so believable that the resultant emotions become very palpable. “Nate and Margaret” will make you feel good– without making you feel like you should have to feel good.

“Nate and Margaret” is now available on DVD. Visit http://www.BreakingGlassPictures.com for more info.