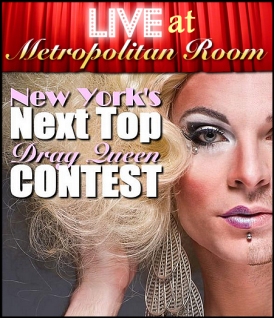 What’ good is sitting alone in your room watching a drag contest on TV… with cold pizza and warm beer leftover from the weekend?  How about watching a LIVE drag contest at one of New York City’s most envied cabaret hotspots… with a smart cocktail?!  Welcome to the first-ever “New York’s Next Top Drag Queen Contest”, an ongoing six-week series at The Metropolitan Room— complete with audience participation, judge feedback, and a deliciously dirty emcee.  Described in reviews as “sleek”, “high end”, and “elegant”, the Metropolitan Room will never be the same after the kickoff of this wild and wiggy event.  Yes, kids, this was live drag at 7PM on a Monday night, a point that was not lost on our famous harlequin-haired host Hedda Lettuce (“Drag queens at 7:00?  Un-f*cking-heard of!”).  Yes, our hard-working Hedda knows a thing or two about drag herself.  She has been plying her trade since the glory days of downtown Manhattan DIY fabulousness in the early ’90’s.  To top it off, the opening night was April 1st (A few observers on social media wondered if this event was really legitimate, or just an internet prank…), prompting Hedda to declare, “There are many good ways to fool a drag queen on April Fool’s Day.  Replace their cocaine with Splenda!  That will do it!  Or, the usual itching powder in their tucking panties!…” SNAP!  How could you not love a hostess who, shortly after greeting the crowd with “Look at all of you out here for this glamorous show tonight!”, wasted no time in zeroing in on some “lucky” audience members, in this case a girl named Megan: “Hello there, sweetheart!  Look at you, right in the front row.  You’re dead meat!  You should have NEVER sat there!  I’m sure one of these drag queens is gonna spontaneously combust.  You’ll be cut to ribbons from glitter, eyelashes… You’ll be knocked out from a testicle!” Amazingly skilled at those impromptu one-liners, Hedda (Sorry to get so formal so quickly, but “Miss Lettuce” just doesn’t sound right…) didn’t miss a beat the entire night, poking gentle (or not-so-gentle) fun at the Contestants as well as her fellow well-known drag peers, and offering such musings as whether she should change her drag name to “Tara Dactile” or “Downtown (sic) Abbey”.

Running on five Mondays from April 1 to May 6, the premiere night featured two songs each from nine “rigorously pre-screened” drag artists: Candy Samples, Reverend Yolanda, Goldie Fische, Titania Steele, Bootsie Lafaris, Millie Grams, Sonja Brooks, Mica (pronounced “MEE-ka”), and Didi Panache. (A tenth Contestant didn’t make it that night.).  All were judged for their looks, their singing, and their overall entertaining skills… with the goal being to find a gal who can wow the audience with her own full-length show at The Metropolitan Room.  Note how I say “SINGING”.  As one of the Contestants (cute-as-a-Sara Lee cupcake Goldie Fische) proclaimed, “Traditional drag queens lip-synch.” To be completely accurate, a drag diva singing in her own voice is actually nothing new… but she’s right in that audiences in 2013 definitely expect more.  In fact, these queens were proof positive that drag has evolved in a big way through the decades.  From the renegade, nun-turned-mod chick opening act of Millie Grams (Love that split!) right on through till the finale, all these girls had their own style, from the so-called “high drag” to the take-no-prisoners, gender-f*cking outrageousness of Titiana Steele.  Some broke the rules in their own way:  Stunning Mica eschewed the gown for leather jacket and pants, evoking the “don’t-f*ck-with-me”, bad girl image of the women of Russ Meyer movies.   In addition to a wide variety of styles in both looks and performance, there was also a wide range of levels of experience… from an 18-year old relative newbie to more established performers who have already garnered accolades in the worlds of independent music and theater.  One VERY tall Contestant (Sonja Brooks) payed tribute to enduring gay icon Judy Garland (a very DRUNK Judy!…) with two songs, while others were resurrecting some kitschy musical gems just aching to be heard again. (Bravo to lovely Didi Panache for giving us Ann-Margret’s campy “Thirteen Men”.)  The crowd and judges certainly loved multi-award winning performer (and Interfaith minister!) Yolanda, who had the entire Metropiltan Room clapping along to the gospel-flavored “I’ll Fly Away” before mesmerizing us with “We Are Angels”– accessorized by VERY high hair and guitar!  The audience also got to indulge their sweet tooth with  ANOTHER gal originally from down South, Candy Samples… who original numbers “Green Bean Casserole” and “If I Had Only Left (Two Shots Early)” were real crowd-pleasers.  And, of course there was 25-year old Bootsie Lavaris, whose high kicks, high-energy dance moves, wardrobe tear-away, and flying earrings (!) gave the Metropolitan Room a shot of adrenaline midway through an endless drag all-you-can-eat buffet… or as Hedda declared, “the longest drag show in history”!

The contest’s permanent Judges were MAC and Bistro award-winning cabaret producer Joseph Macchia (“Cabaret Cares”, “Broadway on 22nd Street”, “Boys Night Out”, and most recently “Judy and Me”– how appropriate, given Ms. Garland’s omnipresence that night); Broadway veteran and cabaret star (multiple Award nominations and wins) T. Oliver Reid, who has appeared in some pivotal Broadway roles (from “La Cage aux Folles” to “Sister Act”); and culture vulture/journalist Frankie C., a columnist for the widely-read “Odyssey” Magazine. There’s also a  Mystery Judge who will remain “closeted” until his or her identity will hopefully be revealed at the contest’s over-the-top finale. The Judges were incredibly supportive that night, offering some smart, constructive criticism to all nine girls.  For all those who were expecting the Judges to tear apart or insult the Contestants, a la Simon Cowell, I apologize in advance!  And hey, Hedda Lettuce herself seemed to really dig the show, when she wasn’t contemplating ideas for a new book. (“‘Fifty Shades of Doris Day’… before she kicks!”)

“New York’s Next Top Drag Queen Contest”” may evoke comparisons to some of those so-called reality TV shows that clearly inspired it, but make no mistake: This might have been a night of larger-than-life wigs, makeup, and chicken cutlets (For the lay person: we’re not talking about Parmigiana here…), but this night was as REAL as it gets, complete with plenty of sweat and tears.  No blood yet, although with Titania Steele, you’ll never know in the future… 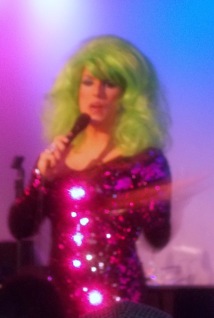 The next “New York’s Next Top Drag Queen” will be April 15, with more shows featuring the semi-finalists on April 22 and April 29, and then the May 6 finale.  All shows are Mondays at 7pm.  Visit http://www.MetropolitanRoom.com/show.cfm?id=90060 for more info!