RICHARD PRYOR JR. at THE METROPOLITAN ROOM: The Son Rises at Night! 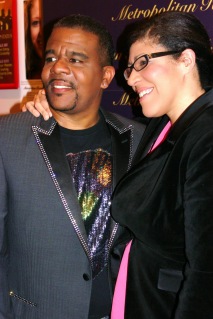 Many (if not MOST) performers are often shy about revealing their age.  In Richard Pryor Jr.’s new one-man show “Life, Love, and a Little Laughter”, one of the first things the singer/actor/comedian revealed was his date of birth: “I was born in 1962 in Peoria, Illinois!”  When an audience member yelled out, “You don’t look a day over 21!”, the charismatic Pryor retorted, “Black don’t crack!” without missing a beat.  Richard Jr.’s playfulness set the tone for the truly one-of-a-kind performance at New York City’s envied cabaret hotspot The Metropolitan Room.  There would be more personal stories, revelations, and heartfelt moments throughout the course of the sold-out show– as well as great music and great laughs, of course.  The lively audience was happy to return Pryor’s energy.  Richard Jr. was accompanied by his piano man Steven Carl McCasland, whose talent at the keyboard served as a vivid soundtrack to the performer’s truly unique life story… and a truly unique night of surprises for all.

Pryor opened with “I’m Feeling Good”.  As many of you know, Nina Simone’s unforgettable version is one of those performances that leaves the listener breathless and quietly euphoric afterward– the equivalent of aural post-orgasmic afterglow.  Pryor more than gave the song justice, with a combination of multi-layered vocals and confident yet youthful, wide-eyed delivery.  He did the same for Elton John’s “Electricity” and for the emblematic classic “A House Is Not A Home”, bringing a real sincerity with his voice and stage presence.  Pryor can indeed hit some impressive notes, as he showed later on in the show with his rendition of  “God Bless the Child”.  He can also raise the roof and get the crowd excited… like when Pryor whipped out an Afro wig (complete with hair pick!) for a rousing, audience-pleasing cover of Stevie Wonder’s “Living For the City”.  He gave a bold, in-your-face delivery with this one– which suited the song perfectly.  Later on, Pryor also got the chance to really BELT with the Ray Charles classic “Georgia On My Mind”, which we learned was the first song Pryor ever did in karaoke!  The audience really ate– or should I say DRANK– it up.

Between the songs, Pryor incorporated some priceless stories about his own colorful life, including some anecdotes about discovering his budding sexual identity while serving  in the Navy. We also hear stories about his life as the child of a major celebrity (“The things that happened, and the things we SAW!  If these walls could talk…!”)  Some stories were gut-bustingly funny (He recalls the time when he and his sister Rain would re-enact the famous bed-shaking scene from “The Exorcist”.), and others were more provocative.  Perhaps the most touching tribute to his genealogy came with a number inspired by watching his late dad sing in a YouTube video: “Nobody Knows You When You’re Down and Out”.  (Yes, folks: Richard Pryor Sr. was also an accomplished singer as well as comedian and actor.) Another family memory also inspired another performance: When Richard’s siblings wouldn’t let him be Dorothy when they played “Wizard of Oz” as children, he reinvented his own more fabulous creation: “I’m A QUEEN Ole Lion”, inspired by “The Wiz”!   It was pure camp fun.  Hands down, the most memorably emotional moment came with Pryor’s tribute to his late mother, for whom he expressed much affinity.  The song was “The Rose”, made famous by Bette Midler in the movie of the same name.  Pryor really sang OUT for this one, not faltering on a single note.  The audience, who were pretty high-spirited the entire night, were now left speechless.  Just when you thought that Richard’s life story couldn’t get more interesting, the celeb also told his stories about his adventures in the glittery world of drag (and yes, he DID break out the accessories!…).  He  recalled his memories so vividly that we wish we were there.  The audience was treated to “I (Who Have Nothing)”, a camp delight just begging to be heard again.

Richard Pryor Jr. strikes us as a performer who could indeed keep the audience entertained all night long.  Sadly, the sun had to come down on Richard’s show, and it was time for the big finale.  I won’t reveal what the last song was, except to say that it gave the audience a flashback to 1999 (And no, it’s not THAT one!)  This may have been a “one man show”, but Richard Pryor Jr.  has enough energy for ten men.  Now, THAT’S entertainment!