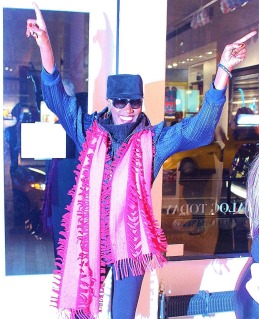 Grace Jones– a “deluxe triple threat” (singer, model, actress)– dedicates an entire chapter of her expansive new biography, “I’ll Never Write My Memoirs”, to her infamous reputation for being late.  It’s Chapter 11, named “Delay”. Although the star goes into great detail about her tardiness (as she does with other aspects of her life throughout the book), she admits that it’s simply become part of her larger-than-life persona: “It became part of my reputation.  Part of my image.  I would not spoil the mystery concerning my lateness. And I do help the mystery along.  If people expect me to be late, I arrive late. How boring, she has not arrived.  She’s two hours late.  What on earth is she doing?  The audience would boo and jeer– Burn the witch!  Burn the witch! — and then I would go out there and say, ‘Okay, bring it on!’. Or I would sing one line of a song, and they would forget how long they had waited.  It was worth the wait– that was the point.  Keep the audience waiting, and then make sure it was worth it.”  Incidentally, the reader gets many more priceless stories of Ms. Jones’ trademark lateness long before Page 281: She dedicates an entire chapter, “Andy”, to her friend and inspiration Andy Warhol.  Grace was Warhol’s date for Arnold Schwarzenegger’s and Maria Shriver’s wedding in 1986, and despite Andy’s plea of “We can’t be late, Grace, we can’t be late”, the eye-popping odd couple did arrive (all together now…) late!   To restate the obvious, she writes about being late a lot– although to her audience’s titillation, she writes about being naked a lot more. But more about Grace Jones and her lateness, uhm… “later”!

“I’ll Never Write My Memoirs” features almost 400 pages of really good stuff: Celebrity anecdotes.  Personal revelations.  The sentimental (and not-so-sentimental!) reminiscences of Jamaica, Paris, and New York, complete with sounds and smells… and, there’s Miss Jones’ keen analysis of pop culture history all along the way.  It packs a real wallop.  Many celebrity autobiographies are criticized for being, shall we say, “skin deep”, but this book gets right into the heart and soul of both the 67-year old performer as well as the many different worlds she’s passed through and left her mark on.  Jones starts off with telling us about her very difficult childhood in her native Jamaica.  She was raised by relatives in a strict Pentecostal home, where her caregivers’ devotion to religion often manifested itself through very strict adherence to rules… and frequent beatings when these rules were broken.  Many readers may be tempted to skip ahead to when the little girl from Spanish Town became the woman known worldwide as Grace Jones. (She writes about heading for the US for the first time: “I crossed the water, feeling no emotion about leaving Jamaica behind.  It had never felt like home, and there was little to look back on but confusion and penitence”.  Later on in the book, she devotes a whole chapter to how she has since rediscovered and learned to love her homeland again.) Pop culture addicts, after all, want to read about the sex, the drugs, and the famous people (Believe me, there are PLENTY of all three and then some…)–but you’ll find it hard to skip a single word along the way.  It’s clear that Jones’ rough childhood and restless quest to find her niche has made her the one-of-a-kind icon that she is today.  Whether she vividly reminisces about her first orgasm (Really!), the streets of Paris, or partying in New York, she gives great background info on the cultural and even the political climate at the time– and those vintage scenarios really come back to life. Fast forward to 2015, and Jones gives us her own undiluted opinions about today’s reigning female pop singers– with special attention to one star, whom she cryptically calls “Doris”.   A sneak preview of the book last month inspired a lively social media debate about just who “Doris” is. (Beyonce? Lady Gaga? Britney?)

The release party for “I’ll Never Write My Memoirs ” took place at the Martin Lawrence Gallery in New York City’s Soho on Thursday, October 1st.  The door opened at 9PM, but our Grace didn’t arrive until after 1AM.   (The word “diva” may come to mind, but don’t ever let Grace hear you say it.  She makes it quite clear in her book: “I hate that word diva.  It’s been so abused!  Every singer given a makeover a few weeks on a talent show seems to be called a diva these days!”)  Granted, it was a fabulous atmosphere to be waiting in.  In addition to the champagne and the artwork surrounding us (including works by Picasso and Grace’s friend Mr. Warhol), there were such notable New York City personalities such as Amanda Lepore, Michael Musto, and Fred Schneider of the B-52’s in attendance.  True, by midnight the crowd had thinned significantly… but those who waited eventually got a grand entrance by our Guest of Honor, and were visibly delighted.    Miss Jones indeed seemed to be enjoying herself as well, indulging in a libation (or two) and flirting with the many scruffy and artsy boys who braved the four hour wait on a so-called “school night”.   Which again brings me back to that quote from her book: “Keep the audience waiting, and then make sure it was worth it.”  Well, Miss Grace Jones, it WAS! 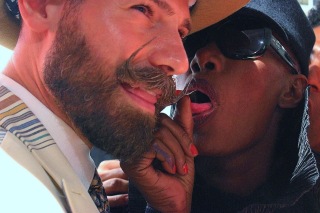