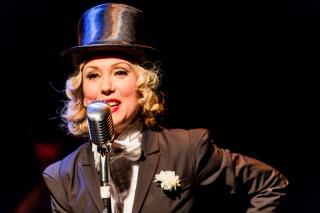 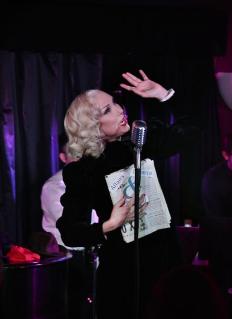 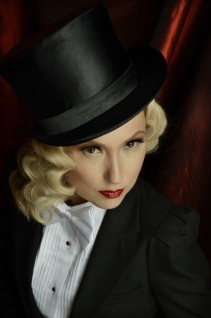 MAD JENNY AND THE SOCIETY BAND: “LOVE UND GREED” at NYC’s DIXON PLACE:
A Review
She may be mad, but she’s perfectly good it at it!

“Mad Jenny”,  (AKA Jenny Lee Mitchell) brought her new show “Love und Greed” to New York City’s famous Dixon Place for an unforgettable “one night stand” of sorts on Wednesday, January 13th.  This truly one-of-a-kind evening offered an astonishing selection of songs from Deutschland’s underground cabaret scene from the Weimar era– sung by Jenny in English, German, and sometimes both.  It’s no mystery why this multi-talented performer would have an affinity for the songs and stories from this time period: This was the epoch when cities like Berlin were notorious for their no-holes-barred nightlife, when sexual and artistic freedom was idealized.   Sadly, as anyone who has studied history also knows, the Weimar era was followed by Adolph Hitler’s rise to power and subsequent repression of the artistic scene.  Knowing that bit of dark history added something of a “forbidden fruit” vibe to the show.

When Mad Jenny makes her first appearance in “Love und Greed”,  she makes quite an impression before she even sings a single note of English or German.  Our heroine appears on stage in full Marlene Deitreich-inspired androgynous glam: a top hat and full tuxedo, with her flaxen hair illuminating her face like her own personal spotlight.  And, Jenny makes the tribute complete by giving a lucky gal a kiss on the cheek on her way to center stage… never letting go of her drink the entire time!  This was, as you may have realized by now, inspired by the scene immortalized in Dietrich’s film “Morocco”, which shocked and titillated movie audiences in 1930.  Being 2016, the audience at NYC’s famous venue Dixon Place wasn’t so shocked this time around… but they were indeed titillated!  There was much more titillation to come…

What came next was a hilariously hedonistic mix of cabaret and burlesque, complete with comedy, pageantry, sex appeal, and shrewd political and social observations throughout.  And of course, there’s the music!  Adorned by her band (Ric Becker on trombone, Marty Isenberg on bass, and Maria Dessena doing double duty on accordion and piano), we were treated to a selection of musical gems just waiting to be reheard and reinterpreted.  Almost all of them are from the late 20’s and early ’30’s.  The show’s opener, “Life’s A Swindle” by Spoliansky and Schiffer, holds a rhinestone-framed mirror to modern humanity’s greatest love affair of all: the love of… money! (The song even name-drops Donald Trump!)  It shows that some love affairs are truly eternal.  “Das Gesellschaftslied”, translated as “The A-List Song”  (Spoliansky and Schwabach) from 1931, is truly priceless: a timeless gem which, given our media’s obsession with “image”, is more relevant than ever in 2016. Other songs are a celebration of sexuality, feminism, and queer equality.   Even those in the know about GLBT history will probably learn some new cultural facts:  “Das Lila Lied” (translated as “The Lavender Song”, by Spoliansky and Schwabach), from 1921, is considered to be one of the first gay pride songs ever written.  Later on, Mad Jenny turns “When That Special Girlfriend” (Spoliansky and Schiffer), from 1928, into a deliciously decadent lesbian love song.  “Raus mit den Männern” (Hollaender and Waldoff), translated to “Chuck Out the Men”, from 1926, is performed with feminist gusto, albeit tongue-in-cheek:
“Men are the problem with humanity,
they’re blinded by their vanity;
Women have passively embraced them,
when we could have easily outpaced them;
Yes we should have long ago replaced them,
or better yet erased them;
If we haven’t made our feelings clear,
we women have had it up to here!”

Jenny even throws in two 1980’s hits that galvanized their status in American pop culture: the Eurythmics’ “Love Is a Stranger” and Blondie’s “Heart of Glass”.  You may even know most of the lyrics of these songs by heart, but chances are you’ve NEVER heard them done like Mad Jenny does them.  And lest we forget, the singer also brought some special guests along for her wild ride: Pandora (AKA Anita Berber), offered some “classic”  burlesque to the mix.  Her costume was little more than two strands of pearls!  Later on, Desert Sin offered their notorious “Milkmaids” number.  Oh my! You’ll need to cool off with some ice cream after this one…

Many of the artists whose work is spotlighted (Mischa Spoliansky, Bertolt Brecht, Kurt Weill, Claire Waldoff, and others) in “Love und Greed” were either exiled or interred by the new regime.  Still, thanks to the creative energies of artists like Mad Jenny, and the enduring power of music and lyrics, their work and artistic visions  live on as we enter 2016.  Perhaps taking a tip from one of her burlesque sisters, Mad Jenny never really gave it ALL away to her audience.  Despite her eye-popping gowns and bewitching presence, she always maintained an aura of mystery about herself.  This was a one night stand at Dixon Place that’s worth a “second time around” (as well as a third, fourth, fifth, etc…!)

You can learn more about Mad Jenny at http://www.MadJenny.com.