"JOI LANSING: A BODY TO DIE FOR" Re-discovering the Life and Secret Love of a Sex Symbol

“JOI LANSING: A BODY TO DIE FOR”
Re-discovering the Life and Secret Love of a Sex Symbol

Picture this: California, 1969.  You are a 21-year old, neophyte actress from Kansas who has come to Tinseltown to make it in showbiz.  You finally get your big break in a bona fide Hollywood film, albeit a low budget “monster flick”.  On the set, you see the film’s leading lady: a stunning movie star whom you’ve always admired AND desired (“There she was… the most beautiful woman I had ever seen in my life!”).  After a nervous meeting, small talk turns into friendship, which quickly turns into inseparable companionship and dedicated love.  The younger actress was Alexis Hunter.  The leading lady was Hollywood sex symbol Joi Lansing, who had a star on the Hollywood Walk of Fame and had appeared on the cover of “Life” Magazine.  And, this true story is finally told– in Ms. Hunter’s new book called “Joi Lansing: A Body To Die For”.  Sadly, Joi Lansing would actually die four years after that serendipitous meeting– from breast and ovarian cancer.  Hunter attributes Lansing’s illness largely to reckless hormonal and cosmetic interventions (including under-the-counter, loose silicone injections) that the star underwent to stay young and desirable, hence one of the meanings of the book’s title. 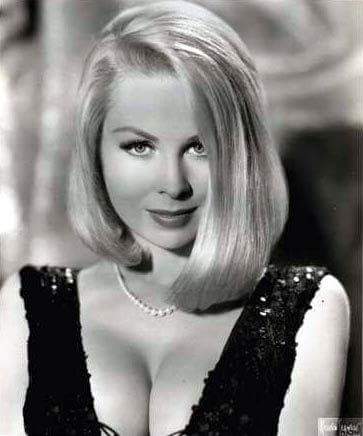 Joi Lansing came into her own as a star during the generation when the “blonde bombshell” type was all the rage.  It was an era in American  cinema when being golden-haired and busty was to be both an object of desire by men and the envy of other women.  In 2016, the name “Joi Lansing” may not be as immediately identifiable as her peers, “The Three M’s”: Marilyn, Mansfield, and Mamie (Of course, we mean Marilyn Monroe, Jayne Mansfield and Mamie van Doren.)  However, the voluptuous Lansing had an impressive resume in movies, television, and theater.   She appeared in 32 feature films, with many of her earlier roles credited only as “The Showgirl”, “The Model”, or “The Blonde”.  Chances are more likely, however, that you’ve seen Joi on the small screen, thanks to America’s nostalgic love of vintage TV.  Lansing had appearances in some of our most popular and enduring TV shows, including “I Love Lucy” (She was one of the “bathing beauties” in the Season 6 episode “Desert Island”) and six episodes of “The Beverly Hillbillies”, where her looks rivaled another TV sweetheart, Donna Douglas’ iconic Elly May Clampett.  As you may have guessed, Lansing’s beauty was her calling card.  This was not lost on her girlfriend Ms. Hunter, who dedicates entire passages in her book detailing Joi’s appearance: “With no imperfections or blemishes, her skin had the smooth appearance of vanilla ice cream.  Keeping her beauty intact cost her very little money, as she cleansed her face with only Oil of Olay…“.  Hunter points out that Joi didn’t seem to be resentful over being “typecast” as a stacked sexpot throughout her career; complaints about those cliched Hollywood “creeps and scum” aside, she seemed to be warmly appreciative of her fame– and willing to give her fans what they expected and wanted.

The movie set where Hunter and Lansing met in 1969 was “Bigfoot”, a low-budget horror movie about the mythical man-beast also known as Sasquatch.  Alexis Hunter (billed as “Nancy Hunter”), had a minor role as one of the female “creatures”.  Joi, who was the female lead, was in company with other Hollywood names such as John Carradine and John Mitchum.   Certainly, neither the film’s creators nor the cast (nor the critics, incidentally…) expected “Bigfoot” to be the next “Gone With the Wind”.  The book even dedicates a very funny passage about Hunter and Lansing actually going to (secretly) see “Bigfoot” when it was finally released into theaters… with Lansing calling the movie “the worst film she’d ever have the pleasure of starring in”.  At the time Hunter came into her life, Lansing was almost 40 years old, and the “blonde bombshell” persona had slowly given way to the grittier female sex symbols of the ’70’s such as Jane Fonda, Faye Dunaway, and Raquel Welch.  Joi Lansing was married to her fourth husband, Stan Todd, an investment broker who was also her manager.  However, that marriage had deteriorated into an amiable yet passionless relationship of convenience.  Because of both the still-repressive attitudes towards same-sex love, and Joi Lansing’s public image as sex goddess, the relationship between Lansing and Hunter was, shall we say, “discreet”– despite the fact that the two women were soon living together.  Hunter assumed the role of “Rachael Lansing”, Joi’s little sister.  Although the two ladies were inseparable, the true nature of their “forbidden” relationship stayed a secret.  As Hunter pointed out: “If I was her ‘sister’, there wouldn’t be any suspicion that we were lovers.  I really don’t know if people ever suspected; nothing was ever mentioned in the tabloids, and we were seen everywhere together.”

“A Body To Die For” is indeed a biography about Joi Lansing, but it’s certainly not one of those dry, paint-by-numbers books about a celebrity.  We do learn a lot about Lansing’s personal life– including the debunking of the studio-manufactured myth that Joi was a devout Mormon who didn’t give into the Hollywood vices of alcohol or cigarettes. (Let’s just say that only half of that was true.) Mostly, however, the book is Hunter’s deeply personal story about her relationship with the woman she so often refers to as some variation of “my girl”.  This memoir truly lives up to its subtitle “A Love Story”.  Endless descriptive passages are dedicated to the sheer joys of being in love: the kind of love where teenage girl giddiness meets all-consuming adult passion at the same time, and the other person becomes the most important feature of your life.   It was a love that indeed defied the labels of “straight or “gay”.  (Hunter reflected, “I came into Joi’s life at a time when she was ready for the all-encompassing love I was able to give her.  I think our love, the love I brought to her as a woman, was softer and safer than the experiences she’d had with the men in her life… and as her lover, I was committed to keeping it that way.”) Lansing was later diagnosed with breast and ovarian cancer, and this is revealed less than one-third of the way into “A Body to Die For”.  What comes next is Hunter’s story of her commitment to her ailing girlfriend– through surgery, chemotherapy, pain, remission, and the ultimate recurrence.  Hunter was her constant companion.  She writes, “I loved this woman deeply, and that meant always being there for her, no matter what.”

Sadly, the disease would eventually take the star at age 44.  The book goes into extensive detail about Lansing’s and Hunter’s life together.  Anecdotes about trips to New York, Cape Cod, Las Vegas, Palm Springs and other destinations go alongside seemingly infinite passages about giggling, hand-holding, kissing, cuddling, naps, staying up late talking, and MANY meals together (Apparently, eating was an important bonding experience for the couple).  Some critics may argue that Hunter’s precious moments may be a bit TOO precious (as in “too overly detailed”, and/or “too personal”…), or that her book is more of a true-life “romance novel” rather than a sweeping biography about Joi Lansing’s life.  Then again, “Joi Lansing: A Body to Die For” doesn’t claim to be anything more than the author’s own story, with a bit of a cautionary tale about the effects of Hollywood on one’s soul thrown in. The reader is guaranteed to laugh, to cry, and to be transported back to a more glamorous era where a “forbidden” love flourished among unlikely circumstances. 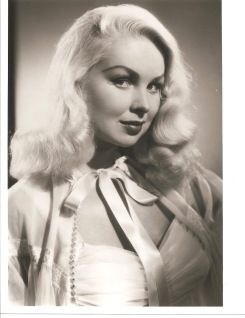 “Joi Lansing: A Body to Die For” by Alexis Hunter is now available.