"CYRANO: a love letter to a friendship": Timeless Tale of Mistaken Identity Gets a Gay Reinvention for 2016 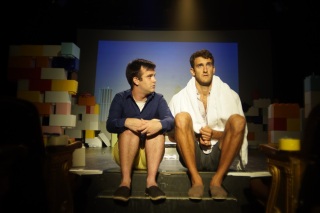 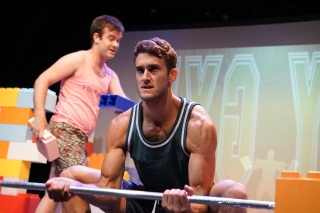 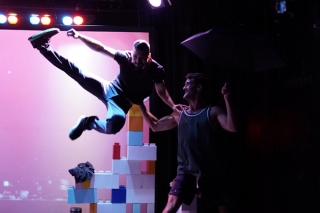 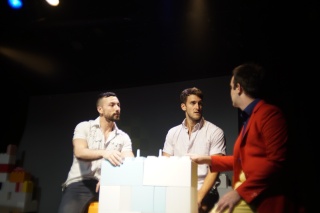 “CYRANO: a love letter to a friendship”:
Timeless Tale of Mistaken Identity Gets a Gay Reinvention for 2016

Sean Peter Drohan’s “Cyrano: a love letter to a friendship”, a modern-day reimagining of the famously ageless love story, opens with two men dancing around on stage clad only in white briefs.  Their dance is a mix of sexually-charged abandon and childlike exuberance.  The small stage of New York City’s SoHo Playhouse is adorned with giant, brightly colored Lego-esque building blocks.  Pulsating trance/house music plays in the background, while neon strobe lights flash, swirl, and titillatingly assault the audience’s eyes.  It’s an appropriate setting: For single gay men, New York City is indeed a playground of sorts– complete with music, infinite eye candy, party drugs, and an endless number of candidates for both Mr. Right and Mr. Right Now.  We are formally introduced to the two men: Christian (Adam Roberts) is rugged, tall, and lean.  By contrast, the titular Cyrano (played by Drohan), who wears glasses, would likely be labeled a “cub” in modern-day gay lexicon.  The audience learns that Christian and Cyrano are roommates and best friends.  Cyrano makes his living as a ghostwriter for gay erotic fiction (Never say “porn”!) with titles like “The Pageboy’s Dilemma”, while Christian seems content to be a full-time socialite.  When the image-conscious Christian looks into a mirror and asks, “Do I need a nosejob?”, Cyrano retorts, “No.  You need a JOB!”. It’s just one of the many snappy (and often hilarious) pieces of repartee between the two. Their friendship is never sexualized but is clearly very intimate, to the point that Cyrano has no problem asking Christian to help him “prepare” for a hookup. Without giving too much away, it involves a razor, a can of shaving cream, and Cyrano bent over one of those aforementioned building blocks.  Despite their closeness, the cute and smart Cyrano suffers from crippling insecurity when he compares himself to his more traditionally handsome bestie.  The differences in their personalities come to the forefront, in a dramatic way, when Christian starts dating the impossibly fit and “brilliant” Rock (Judah Frank), the play’s third character.  In a bit of role reversal, it’s now Christian who feels insecure about the new object of his desire– and he reaches out to the more intellectual Cyrano for help.

By now, audience members familiar with the 1897 French play may think they know where this new work is going: that Cyrano will use his writing talents to help the dim Christian win Rock’s affection.  Before you ask: No, Drohan thankfully does not feel the need to wear a prosthetic to mimic the original protagonist’s famously large nose.  And, although the playwright indeed gets some inspiration from the classic story of Monsieur de Bergerac, the “mistaken identity” aspect of the original is just scratching the surface.  Things are just way more complicated in our sensory-overloaded 2016– the era of Smartphones, Facebook, and Grindr.   Equally as complicated are the play’s three characters, who– as over the top and colorful as they can be– are fully realized underneath their comical personas.

To say that this new reworking of “Cyrano” is ambitious would be an understatement.  In just over an hour, the play manages to be both an unforgiving mirror which invites the gay male community to look at itself, as well as a quick-witted satire of that community as well.  The play addresses the issues of gay male vanity and “body fascism”, as well as that universal phenomenon of always wanting to acquire that proverbial “Holy Grail”– which, in “Cyrano 2016”, is embodied by the hard-bodied Rock. The play is energized by some creative musical and visual adornments, and even throws in some lively choreography.