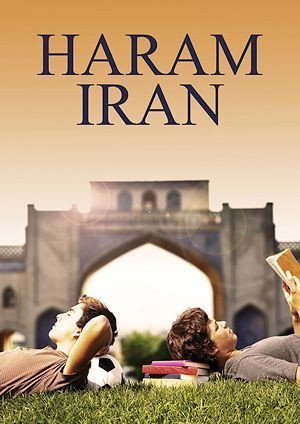 Based on real-life incidents, Jay Paul Deratany’s 2010 provocative and ultimately haunting play Haram! Iran! brings to the stage the true (and by some accounts, controversial) story of Mahmoud Asgari and Ayaz Marhouni, two Arab teenagers who were put to death in Iran in 2005 for accusations of having a homosexual encounter, with concurrent charges that may or may not have been true. Their public execution received international attention, complete with graphically disturbing photos which were seen by millions on the internet. In an era where LGBT people worldwide have slowly made some modest gains in terms of visibility and rights, the Asgari-Marhouni incident opened many people’s eyes on the situation for those who haven’t: specifically, LGBT’s in certain Islamic countries. In telling the story of the two boys, Haram! Iran! also re-creates the characters’ setting of a post-revolutionary Iran. It was a culture which prided itself on its religious ideals, but also proved to create the perfect storm for the ultimate punishment for the unorthodox love between these two teens. Directed by Rick Leidenfrost-Wilson, Haram! Iran! was nominated for a GLAAD Award during its Los Angeles engagement. The play is making its New York debut at Manhattan’s TADA! Theater.

The “haram” of the title is an Arabic term meaning “forbidden”. In Islamic legal philosophy/theory, it is used to refer to any act that is forbidden by Allah. In the play, the characters make many references to “haram”, which covers everything from dietary guidelines to matters of gender and sex. The boys in the play may joke about Rice Krispie Treats being “haram” (because of the gelatin in the marshmallows), but the issue of homosexuality is taken far, far more seriously. In Islamic countries which follow Sharia law in part or in whole, including Iran, the penalties can be severe— from lashing, to imprisonment, to the death penalty. Although accurate figures have been very difficult to gather, Amnesty International reports that some 5,000 gays and lesbians have been executed in Iran since the 1979 Iranian Revolution.

Haram! Iran! opens with the scene of two friends, Mahmoud (Rahul Rai) and Fareed (Kal Mansoor). Both are athletes with dreams of playing for the Iranian National Football Team. Mahmoud, however, is doing poorly in school. His headmaster suggests a study partner, Ayaz (Roberto Tolentino). An artist and neophyte intellectual, Ayaz prefers books to footballs. (“To read whatever you want, without fear… That would indeed be heaven!” he proclaims.) He shocks Mahmoud by showing him his collection of “black market” literature, which includes a copy of National Geographic (Bare bosoms? That’s “haram”!). Although Mahmoud is initially reluctant to be Ayaz’ “student”, he becomes intrigued by his schoolmate’s revelations about escapism through reading— particularly with the adventures of Holden Caulfield in the American classic The Catcher in the Rye. Ayaz, in turn, develops protective feelings and genuine affection for his athletic new friend. The two may be as different as can be, both physically and culturally, but It’s not difficult to see why Mahmoud soon falls for Ayaz’ growing affinity: Ayaz gives him encouragement, support, and attention — which the footballer confesses he doesn’t get much of at home. Ayaz’ fondness becomes more clear when he presents a painting of his new friend, which by strict Islamic standards of modesty would be considered provocative. The dramatic shift in Haram! Iran! occurs when the two boys are caught in a rather innocent but still incriminating situation by Farred, who has become jealous of Mahmoud’s new friendship. The audience already begins to sense that a negative turn of events is in store for the two even before the word “habibi” (Arabic for “beloved”) is uttered. Their fate becomes even more precarious when Fareed’s unflinchingly abusive, sadistic father Satar (Colin Mulligan)— who also happens to be an unflinchingly abusive, sadistic legal prosecutor — gets involved.

After her son is accused and jailed, Ayaz’ devastated mother (Naama Potok), feels guilty for “enabling” her son by giving him books and for not intervening sooner in the boys’ intense friendship. She recruits the help of Shirin (Sahar Bibiyan), a woman who was a lawyer in the Shah’s Iran but has been demoted to clerk. (In post-revolutionary Iran, women are not allowed to practice law.) Realizing that this may be a hopeless case, this passionate ally does her best to appeal to the Judge (Russell Jordan), whom she was friends with prior to her demotion. Bringing up the mercy of Allah and the ages of the two accused boys, the “lowly woman” must walk the super-fine line between being advocate without actually “practicing law”. Embellishment, prejudices, dubious additional allegations, and local political forces come into play for the very intense trial up ahead.

As directed by Leidenfrost-Wilson, Haram! Iran! is fast-moving, engrossing, and superbly acted by the entire cast. As Mahmoud and Ayaz, Rahul Rai and Roberto Tolentino expertly convey the evolving, intricate chemistry between their two characters. Naama Potok is a revelation as Ayaz’ mother. As Fareed, Kal Mansoor transforms what could have been a one-note character into a far more complex one, even inspiring a good deal of sympathy. At the same time, Colin Mulligan as Satar expertly provokes genuine fear (even with his wordless acting) in a patently UNsympathetic role. As a strong, passionate, and smart female in what we learn is truly a man’s world, Sahar Bibiyan’s portrayal of Shirin is no less than phenomenal. As the Mullah (judge) who has to make the final decision, Russell Jordan has the difficult challenge of portraying a character who must adhere to Sharia law yet who still respects the opinions of his former legal peer Shirin. In fact, Haram! Iran! is intensely challenging for all the actors, and challenging for the audience as well— not just for the subject matter, but also for the frequent and incredibly realistic scenes of violence. Ultimately, the conclusion is unambiguously difficult —almost painful— to watch. (The primal scream from one of the characters at the play’s denouement could not be more symbolic.) Mercifully, however, that final scene of Haram! Iran! gives the audience some grains of humanitarian hope— and that hope stays with us long after the lights go dark on the stage.