THE PRAIRIE BITCH IS BACK! Alison Arngrim Brings Nellie Oleson Back to Philly and New York 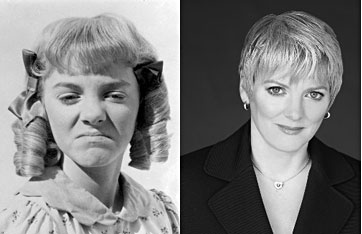 She may have had perfect blonde ringlets and perfectly starched petticoats, but Little House on the Prairie’s Nellie Oleson was one mean little girl!  Interestingly, the character who would eventually become “Nellie” was actually a conglomerate of three different real-life characters from Laura Ingalls Wilder’s childhood.  It was child actress Alison Anrgrim, however, who brought TV’s favorite brat to eternal life on television in 1974.  It would prove to be perfect casting.   Arngrim would play the role of nasty Nellie for seven seasons, and become an enduring villianess of pop culture for decades to come.  Melissa Gilbert’s “Laura” may have been the main character and the proverbial “good girl”, but Nellie was the girl we all loved to hate.  Despite their characters’ constant feuding in Walnut Grove, Arngrim and Gilbert remain good friends to this day.  Arngrim tells me, “Melissa Gilbert loved the character of Nellie.  After I left the show, she said, ‘It’s so boring around here!  Can’t you come back?'” Thirty-six years after Little House wrapped its final season, Alison Arngrim is busier than ever.   In 2010, she wrote a best-selling book named Confessions of a Prairie Bitch: How I Survived Nellie Oleson and Learned to Love Being Hated.  The book was adapted into a one-woman show, which Arngrim has performed all over the country to sell-out crowds.  Her most ardent fans include gay men and Little House on the Prairie fans.  Arngrim has been sainted by the Sisters of Perpetual Indulgence, served as Grand Marshall for the 1996 Golden State Gay Rodeo, and has done tireless amount of work for HIV/AIDS awareness.  She is also an advocate for victims of child abuse.  Arngrim lives in Los Angeles and is married to musician Robert Paul Schoonover, who has been at times called “Mr. Arngrim”, “The Prairie Guy”, and, best of all, “Mr. Nellie Oleson”.  The couple will be celebrating their 25th anniversary in November this year.
Alison Arngrim took the time to speak to be about her upcoming show, “Bonnetheads”, being used as clickbait, “Nellie defenders”,  and much more!

JR:(Laughs) That’s great!  So, “Nellie Oleson” has cemented her status in pop culture forever…
AA: Isn’t it amazing?  I wake up every morning and go, “Oh my God!  It’s a miracle!”  It’s so cool! (Laughs)
JR:Yes, it is!  It’s so cool that you embraced the character and give your fans what they want. But do you ever get those moments when, let’s say you’re at the supermarket and someone yells out, “Hey, NELLLLLLLIEEEEEE!” and you’re like, “Enough already!”
AA: Oh my God!  I was in Marshfield, Missouri for the Cherry Blossom Festival, and there were people who did keep calling me “Nellie”– including people who were working the event.  They’d go, “Nellie, I mean… Alison!”  There’s a Nellie’s sports bar in Washington, D.C.  It’s not mine.  I wish it was!  It’s a gay sports bar.  I’ve done a couple of book signings there.  The guy who started it says that his grandmother Nellie inspired him.  They had these great rubgy-style T-shirts with a great logo– very comfortable– and I always pick up an extra box of shirts when I’m in town.  So, yes, I have been known to go out in public with a T-shirt that has “NELLIE’S” in big letters on it! But I don’t mind when people recognize me.  They’re generally very nice and say nice things.  When I was younger– in my teens and early 20’s– then yeah, it was a problem. There are kooks in this day and age, but at least nowadays, people have some idea that TV is TV and real life is real life.  Back in the day, people were like, “It’s real!” and there were people who freaked out when they saw me, and got really weird, and were mean to me, and yelled things at me… and threw cups of orange soda at my head in parades…
JR:Holy sh*t!
AA: Yeah.  I got hit in the face with an orange soda at the Christmas Parade in Hollywood.  Direct hit, moving target.  I was kind of impressed.  So, people did get a little nutty with me.  I made them so angry that they could not hold back.  There was the Easter Fair where I made the near-fatal mistake of dressing up in costume with Katherine MacGregor, who played my mother Mrs. Oleson.  We were convinced that it would be great.  NBC loaned us the costumes and did our hair.  My father said, “This is a terrible idea!”  He knew!  We went in costume, and sure enough, we scared the crap out of people.  Nobody wanted our autograph.  They wouldn’t come near us.  Katherine was making small children cry.  They were terrified of her.  Then finally I gave up and went to get something to eat.  I got a hot dog and a Slurpee, and these two little girls came up to me, kicked me in the butt, knocked me face down onto the pavement, and ran away laughing.  I had a hard time getting up, because I was in the petticoat.  I was like a turtle.  My father came and got me, got me another hot dog, and said, “We’re going home!”  That was the last time I ever attempted to do anything in the period costume!  He was right.  It incited people, because they thought this stuff was real.  They couldn’t differentiate, and would become so angry that they couldn’t think clearly–and they’d react!
JR:That’s crazy!
AA: Being Nellie Oleson is an issue sometimes with my friends– because people will ask them, “Oh my God, Why are you friends with her?”  When my husband Bob called his parents, he was the last kid to get married, so they were very excited.  They were like, “Thank God, he’s finally getting married!”  They asked, “What does she do?”  He said, “She’s an actress,”  They said, “Great!  Has she been in anything we would have seen?”  He answered, “Little House on the Prairie”.  Well, his parents at the time were living in Deerfield, Ohio: population 600.  So, you can imagine … They were like, “Oh my God, who did she play?”  And he said, “Nellie Oleson!“.  And I swear to you, it was like the line went dead. There was just this horrible pin drop silence.  And finally his father said, “She’s not like she was on the show, is she?” (Laughs)

(Alison Arngrim and Jed Ryan in 2010)
JR: Oh, lawd! So… anything else you want to tell your fans… besides, obviously, “Come see the show!”
AA: Yes, come see the show!  I stay around afterwards and sign autographs, and I’ll have books for sale, and free bookmarks!  I’ll have scented candles: We have “Nellie’s Warm Cookie” and “Alison’s Hot Orange Tart”!  I’m doing The Vagina Monologues at The Loft Ensemble in Sherman Oaks on May 18th, and I have my “Nastie Nellie Oleson Tour” around Los Angeles on the 20th.  And oh, I’m in a play at the Sharon Playhouse in Sharon, Connecticut in August.  It’s called Always, Patsy Cline.  It’s great play based on a true story.  Patsy Cline was kind of lonely, and she often befriended strangers she met on the road.  She met this woman named “Louise” by chance.  They became great friends.  I’m Louise, and Carter Calvert, a fabulous woman who can sing, is Patsy Cline.  She does all the singing, I do all the talking!  It’s a fair division of labor. Louise is a marvelous character.  She’s very sympathetic.  At first you kind of go, “Oh, she’s this wackadoo country bumpkin hee-haw case, and she’s obsessed with Patsy Cline, and she’s like some stalker!” And then you  realize that she’s really very cool, and that she and Patsy Cline really are such great friends and have so much in common and support each other.  It’s such a trip!  I’ll be there pretty much the whole month of August.   In September I’m doing something at the Rochester Fringe Festival, and I’ll be doing Snake River Comic Con in Pocatello, Idaho,  Have you ever been to Pocatello, Idaho?
JR:(Laughs) I can safely say I haven’t!  Not yet, anyway!
AA: I didn’t know that “Pocatello” was a real place… but it’s in a Judy Garland song!  That’s why I had to go!  In A Star is Born, Judy says, “I was born in a trunk In the Princess Theatre in Pocatello, Idaho.” When I was growing up, I just thought that “Pocatello” was a made-up place that Judy Garland sang about… but it’s actually a real place!
And there is a theater like the one she was talking about. So I said, “Yes I need to go, as long as I can go to the Princess Theater!”
JR:Well… Pocatello, Idaho is a long way from Walnut Grove, that’s for sure! After what you told me, I’ll have to add it to my travel itinerary! Thanks for speaking with me, Alison.  See you in New York!