Originally produced in 1991, priest-turned-playwright Joe Pintauro’s provocative AIDS-themed drama Raft of the Medusa has a production history that’s as interesting as the play itself. Upon its off-Broadway premiere in New York City’s East Village, Raft closed after 9 previews and 30 performances, with mixed to positive reviews but lower than expected attendance. It’s not entirely difficult to understand why Raft of the Medusa may have not been a huge attraction upon its initial debut. Given that advances in HIV/AIDS treatments still had a long way to go, the unflinching approach to the play’s dark subject matter may simply have hit too close to home for many audience members– especially in New York City, where the epidemic was rampant. Fast forward to 2018, and Pintauro’s drama, put into a new historical perspective, is ripe for rediscovery as a unsung classic of New York City theater. While admittedly more than a bit dated (One character declares, with wobbly optimism, how it is possible to live “five or six years” with AIDS…), the play’s themes of changing social mores, forgiveness, hope, and survival are indeed timeless, and are in some ways more relevant than ever 27 years later. Barefoot Theatre Company’s new revival of Raft, now playing at Manhattan’s Flamboyan Theater at Clemente Soto Velez Cultural Center, does Pintauro’s bold piece great justice, giving new generations an important– if not exactly happy– reminder of a tense and turbulent era in New York City sociocultural history. The very first scene of the play, in fact, delivers the theater attendees an image that was hauntingly familiar to those who remember the early days of the epidemic: a young man in his last few hours of life, disoriented and frail, with a body covered in KS lesions. We learn that the young man was a former rabbinical student named Donald (Perri Yaniv). This character’s suffering is finally over. For the other twelve whom we next meet, including Donald’s surviving lover Michael (Jeremy Brena), the anguish continues– particularly when Donald’s ghost continues to confront Michael’s seemingly tortured soul. We feel the characters’ individual and collective pain from beginning to end. One of Pintauro’s goals was clearly to challenge his audience, and Director Francisco Solorzano and the hardworking cast fulfill the playwright’s goal.

Metaphorically inspired by the legendary Théodore Géricault painting of the same name (which depicts the aftermath of a shipwreck: a raft full of the dead and the living), the setting of Raft of the Medusa is an AIDS support group in the 1980’s led by dedicated doctor Jerry Rizzo (Gil Ron). The regulars of Rizzo’s group compromise a deep cross-section of society– with various ages, sexual orientations, economic statuses, and ethnicities. While four of them are young gay or bisexual men (The jury is still out on the enigmatic character Larry, played by Christopher Whalen), other attendees include Bob (Michael Billingsley), a straight, married biker with a weakness for prostitutes; Jimmy (Francisco Solorzano), a drug dealer and former Rikers Island inmate; Alan (Bobby Daniel Rodriguez), a tempestuous and embittered PWA whose face is scarred by KS lesions; and Nairobi (Delissa Reynolds), a drug-addicted, homeless, speech- and hearing-impaired African-American woman whose entire family was wiped out by the virus. Another regular is Cora (Czarina Mada), an upper middle class woman who was infected by her bisexual lover during an extramarital affair. Cora, incidentally, is angry about the coarseness of the male members of the group, and openly bitter about men who have spread the virus to women. She specifically calls out Doug (Charles Everett), an openly bisexual Vietnam vet.

We also meet the new members of the group: a guarded, newly-infected teenage girl named Felicia (played with remarkably nuanced poise by Raiane Cantisano), and Alec Quinn (Robert Montana), a popular actor who gets permission to attend the group because, in his own words, “I want to understand this thing.” Needless to say, the other attendees are appropriately wary of the handsome actor, which causes some group tension. It turns out that Alec has a secret, and his inevitable disclosure is a moment of high drama in the play. However, that’s only one moment of high drama in Raft of the Medusa-– a piece complete with emotional outbursts, nakedly candid confessions, frank discussions of the disease, and exploration of such contentious topics as assisted suicide. Not all the characters are likable, but it’s impossible to turn away from their stories. At one point, it’s discovered that another character may be breaching the group’s trust and confidentiality. That particular revelation escalates to a shocking physical altercation, complete with a near-rape and an unexpected concealed weapon.

Although the acoustics of the Flamboyan were not always kind to the necessary “theater in the round” style of the play (The actors required some serious projection…), all of the large, youthful cast are very good in their roles. As Tommy, a 20-something dancer who gets seriously star-struck with Alec the actor, Zac Porter offers many of the play’s much-needed moments of levity. Doing double duty as director and actor, Francisco Solorzano as Jimmy passionately rejects the more pessimistic views of many of the other characters when he declares, in the most basic instincts of survival, “I WANNA live!  I GOTTA live!” As Nairobi, Delissa Reynolds is also a standout, giving a powerful performance via mostly wordless acting.

As mentioned before, Raft of the Medusa is indeed a challenging piece of theater. To make it through the running time, we have to believe that the play’s creators will promise at least a vestige of hope hidden somewhere in Raft’s darkly-hued setting. Pintauro, and the cast of this revival, ultimately honor that promise at the play’s touching conclusion– but not before seriously tugging at our heartstrings (as well as our tear ducts) all along the way. 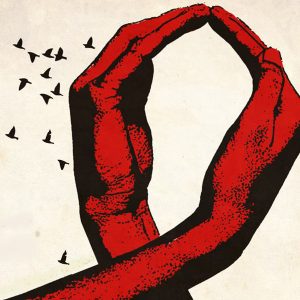