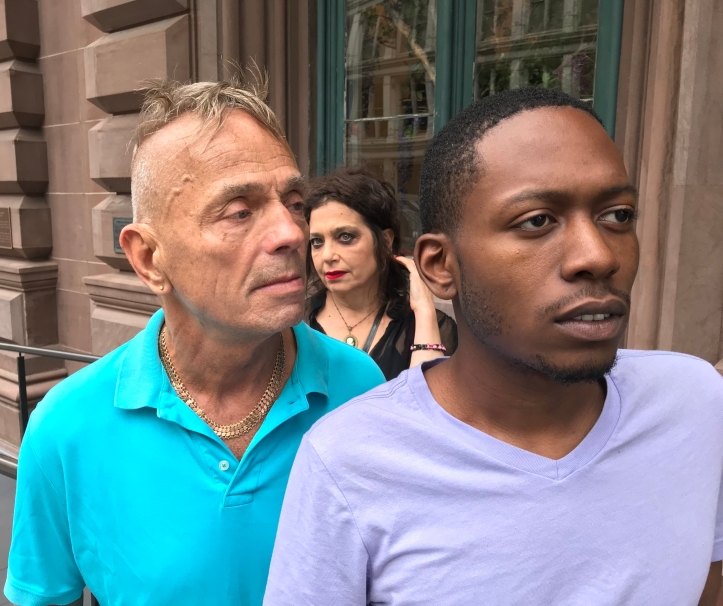 The opening scene of Rick Charles Mueller’s Forbidden shows a man and woman, dressed in comfy clothes, on a couch watching TV together.  At first sight, they strike us as being an ordinary married couple as they snuggle and make small talk.  We soon learn, however, that this is no ordinary relationship.  Charles Foxworth (Rick Charles Mueller, doing double duty as playwright and actor) is a middle aged, gay, Pulitzer Prize-winning author.  Antonia Harry (Rew Starr) is a wide-eyed child-woman suffering from uncontrolled bipolar disorder and, most likely, other mental issues as well.  (The audience doesn’t have to wait more than about five minutes before Antonia shows us one of her… shall we say, “moments”– which Charles rates “7 out of 10”.)  We learn later that Antonia’s illness has cost her, among other things, her career and custody of her son.  Charles and Antonia– two damaged souls– are indeed committed to each other.  They jokingly refer to each other as “husband” and “wife”, complete with bickering.  Charles, however, is yearning for romantic male companionship; he still preciously saves the bottles of medication from his long-deceased lover.  The 50-something writer is also looking for more artistic success in his field: specifically, the opportunity to star in one of his own plays, named And the Streets Do Cry.

The next night, Charles and Antonia go on a “date” to see a show, and Charles becomes instantly fascinated with the show’s 23-year old star– a handsome, slender African-American actor/dancer with a killer smile named Trevor Allen Scott (Darius A Journigan), who has been in New York City only six months.  Charles flirts big time with the younger man (much to the irritation of his “wife” Antonia), and then convinces the director of his new play (Alexander Wei Xin) to cast Trevor in a role in And the Streets Do Cry.  It’s a role which, incidentally, requires the two men to be naked in bed together.  Trevor, who himself is dealing with a waning relationship with his own boyfriend, soon becomes fascinated by Charles– from the playwright’s success to his ornate West Village apartment.   Life winds up imitating art, as Trevor starts dropping by that ornate West Village apartment unannounced, and the two men soon find themselves in a sexual relationship.  The older man lavishes the younger one with dinner at restaurants, Broadway shows, and jewelry.  In the meantime, Antonia’s mental stability continues to erode.  And the Streets Do Cry promises to be a big hit.  However, one of the two men has a very different interpretation of the pair’s unlikely relationship, resulting in an unexpected plot twist at the climax of Forbidden.  Antonia, meanwhile, gets overpowered by her emotional demons, leading to an equally unexpected tragedy.

As Antonia, Rew Starr expertly captures the agony of her character’s mental illness. She can be funny and fascinating (the kind of character that theater-goers love…), complete with her over-the-top choices of fashion (In one scene she wears a blindingly bright pink feather boa with equally blindingly bright pink lipstick).  But within  seconds, she can become rowdy, rude, and hard to take (the kind of character that theater-goers love to hate…).  Either way, the audience just can’t look away from her. Ms. Starr is is an actress who would be wasted playing a so-called “normal” woman.  Darius A. Journigan is engaging and perfectly cast as Trevor, an energetic fledgling “man-genue” with stardom in his hungry eyes.  Intentionally or not, playwright/actor Meuller plays his character as overly mannered, right on down to the occasionally quaint dialogue and enunciated (over-enunciated?) style of speech.  In addition to dynamic performances by Starr and Journigan, the play also features a very smart and often very funny script.  Forbidden could strongly benefit, however, from smoother flow between scenes; the delayed transition from setting to setting could easily become the play’s fatal flaw.

Directed by Alexander Wei Xin and based on a true story by Mueller, Forbidden explores the #MeToo phenomenon in the world of show business, with one of the characters even mentioning the movement by name early on in the play.  It’s also about loneliness and  the need for human connection, which spans across gender, sexual orientation, age, and socio-economic status.  Later on, the play’s exploration of the #MeToo movement becomes much more overt; astute audience members may even see what’s coming ahead of time.  Unlike many of the Hollywood stories we’ve seen on the news, however, this production allows us to hear BOTH sides of the characters’ stories, leaving the audience to make its own conclusions.  Watching Forbidden, I am reminded of the tagline for the 1994 movie version of David Mamet’s two-character play Oleanna, which explored the complexities of sexual harassment decades before the #MeToo movement: “Whatever side you take, you’re wrong…”
Forbidden continues through Friday, August 17th at The 13th Street Repertory Company, 50 West 13th Street, New York City.  Visit http://www.13thstreetrep.org for tickets and more information.