THE GREATEST BACKSTORY EVER TOLD: “Almelem” at Brooklyn’s Brick Theater

The first two characters we meet in Sean Williams’ provocative new drama Almelem are brothel owner Gestas (Nat Cassidy) and his young apprentice/page/confidante, the titular character Almelem (Dani Martineck).  Gestas is sarcastic, cynical, blunt-spoken, and unshakably money-minded.  He also knows his way around some deliciously anachronistic four-letter words.  Conversely, Almelem is wide-eyed and idealistic, seeking both personal enlightenment and a larger meaning to life in general.  Both Gestas and Almelem, like the rest of their fellow Jews. are unhappy about the repressive Roman occupation of their Holy Land via King Herod, and both look forward to the eventual arrival of the Messiah who will come to take their people to a better place.  That place, of course, is the Promised Land that will be called “Israel”.  However, Gestas tolerates the status quo as long as his business is profitable– or, put another way, as long as he’s “makin’ the coin”.  Some things, it seems, haven’t changed much through the centuries… 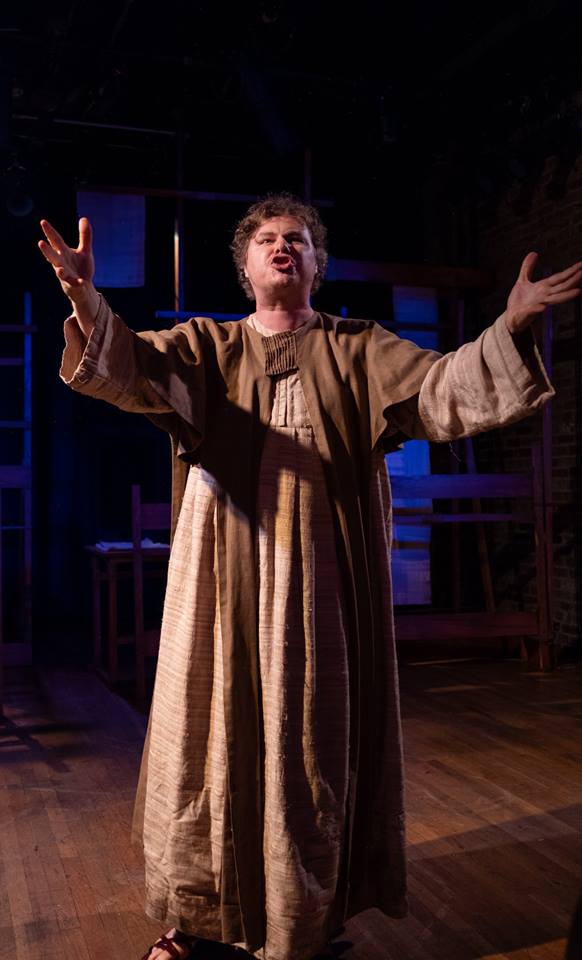 When we first listen in on Gestas and Almelem, they are discussing the arrival of John (Mac Rogers), an unkempt man living in the forest by the river who will soon become known for eternity as “John the Baptist”.  Despite his boorish nature and somewhat “shady” reputation, John is on a mission: He is baptizing people in the Jordan River, claiming to washing away their sins and creating a new, empowering movement among the Jewish people.  John’s message is indeed promising– promising enough, in fact, to get thousands of people to head towards that river.  Gestas starts to think that John the Baptist, in fact, may well be the Messiah himself: the savior who will bring the rule of King Herod and the Roman empire at large to an end.  Almelem, likewise, also believes that John may be the Messiah.  However, while Almelem’s feelings are driven by strong faith, it seems that Gestas’ push for John as savior may be motivated moreso by… well, other incentives. Later on, the situation gets more complicated with the discovery of a new candidate for Messiah, from Nazareth. (Two guesses won’t be necessary as to whom that may be…)  The debate over who should save the soul of the Jewish people soon becomes something of a power play among Gestas and two powerful, well-connected women: Mary Magdalene (Charleigh E. Parker) and Salome (Yeauxlanda Kay). As fate would have it, John the Baptist winds up meeting horrifically tragic circumstances at the beginning of the Second Act, and then there is only one “candidate” left for the job of Messiah… but not before His mother Mary (Kristen Vaughan) is “interviewed” to check for her son’s qualifications.  The balance between the character’s individual faiths (or lack thereof) and their more earthly motivations– money, power, and prestige– is fascinating to watch unfold on stage, especially in the hands of Williams’ smart script and the cast of talented actors. 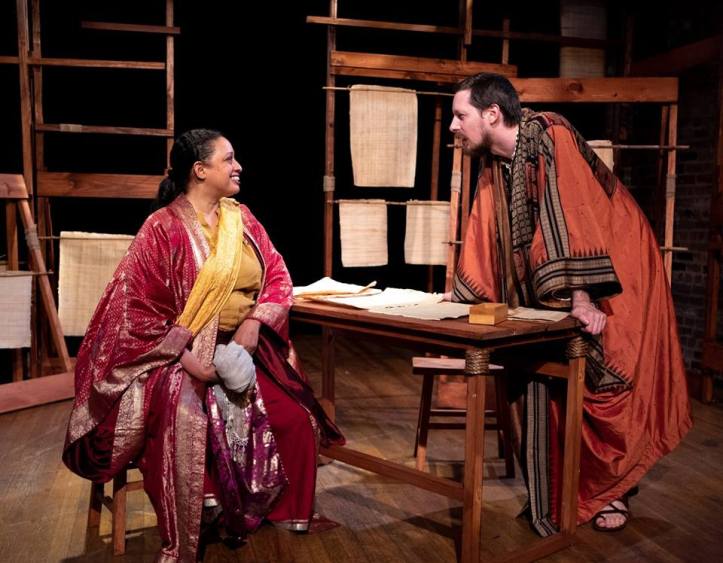 Fast-moving, provocative, and highly entertaining, the central story of Almelem doesn’t deviate too far from its highly familiar source material.  This production, however, sheds a new light on characters that may have been misinterpreted or mistreated by history.  An example are the characters of Mary Magdalene and Salome.  Both of these women were mentioned in the Bible, but both were also the subjects of much historical speculation.  Both had developed reputations which have may have suffered through the years. (Mary Magdalene labeled as a prostitute, Salome as a symbol of dangerous female seductiveness).  In Williams’ play, Charleigh E. Parker’s Mary Magdalene and Yeauxlanda Kay’s Salome are depicted as independent, strong-minded, and smart women who are just as ambitious about “makin’ the coin” as their male counterparts– and not above occasionally using their sexuality to get what they want.  But whether the characters in Almelem are based on real-life historical figures or not, all six actors are fully realized and dynamic in presence.  Nat Cassidy as Gestas and Dani Martineck as Almelem, in particular, are perfectly cast. The dynamic between the two actors is especially fun to watch.  Despite the occasionally heavy subject matter, there is no shortage of light moments in Williams’ script, and even a few cleverly placed “in-jokes”: Magdalena tells Salome, “If Gestas has truly been baptized by this John the Baptist, then I’ll go to the Pharisees and demand a full scale revolution– and I’ll wear nothing but silk and veils!”… to which Salome responds, “Oh, I wouldn’t recommend that!”

The costumes in Almelem, by Amanda Jenks, are elaborate without being over the top, with a well-chosen palette of earth tones for the male characters and more brightly colored designs for the female characters.  As a non-binary character played by a non-binary actor, Martineck’s Almelem wears a well-chosen combination of both bold colors and more muted tones.  The lighting, by Will Lowry, is very complementary to the organic color schemes and to Lowry’s simple yet effective design of wood and hanging sheets of parchment.  As a result, the stage of The Brick has rarely looked better.

Almelem, both the play and the titular character, is a reminder that the people who are not mentioned in history are often the ones who make a big difference.  In this age of “real time” news and the written/spoken word being documented electronically for eternity. the play is also a reminder that we ALL need to pass on our own individual stories– person to person– if we want them to be heard centuries from now.  (Hint, hint…)

Gideon Productions’ Almelem, written by Sean Williams and directed by Jordana Williams, runs through Saturday, October 27th at The Brick, as part the outer-borough portion of this year’s NYC Fringe Festival, AKA FringeBYOV.  The Brick is at 575 Metropolitan Avenue between Lorimer St. & Union Ave, Brooklyn, NY 11211.  For tickets and more information, visit here.