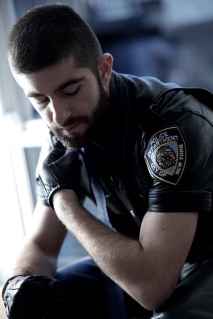 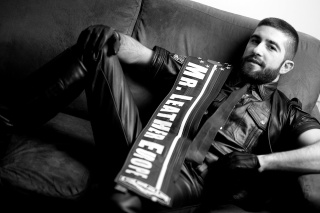 (Above photos of Kilker by Matt Spike, London)

Some Titleholders take their job as a role model and an ambassador to the Leather community VERY seriously– and also manage to look damn hot in Leather while doing it as well, I might add.  As one of the most visible Leathermen in the diverse international Leather and Fetish community, 26-year old Kilker Alcarez fits that description.   His hometown is Pasai Donibane in the North of Spain, and he is of Basque origin.  London, England is his adopted home– and both the fast pace and the diversity of that city, complete with its thriving after-hours subculture, fit him like a leather glove.  In 2011, Kilker was named Mr. Leather UK 2012, and he went on to be a finalist in International Mr. Leather (IML) 2012 in Chicago.  Later that year, Kilker again emerged victorious.  He came out on top amongst a wide variety of sexy Contestants for the Title of Mister Leather Europe (MLE), a pan-European contest of Leathermen held annually around October since 1985.   Through the last few years, Alcarez has had a very busy travel itinerary, planting his boots in more countries than most of us will see in a lifetime. (“If it’s Tuesday, it must be Belgium!”) He has made appearances in Italy, Germany, Poland, and many cities in he United States, as one of the community’s most envied Judges and Special Guests at Leather and Rubber weekends.   No matter what country Kilker finds himself in, however, this handsome and hirsute osito makes an impression, gaining attention and admiration not just for his looks but for his (Dare I say?) sweet personality as well.  His striking image has made him a muse for a wide variety of popular photographers.  Alcarez took some time from his busy travel itinerary to speak to me about the Leather Nation, how the European guys differ from their American brothers, and– best of all– what gets him hot!

JR: Thanks for speaking with me, Kilker!  So, from what you’ve told us, England
is your adopted country, but your ancestry is Basque.  For those of us who
aren’t sophisticated in European culture, what would you want people to know
about Basque Country?
KA: I’d say although it’s legally in French and Spanish lands, it’s very different
from both of those countries. The food is amazing– among the best in the world
and renowned internationally. The Basque Country has strong and old traditions,
and it’s home to one of the strangest and oldest still spoken language in the
world, Basque!  Basque is really different from Spanish and French.  It’s an
isolated language. I’m really proud to have been raised in that language, as it would
been impossible to learn it now.  Men are bearded and stocky in general, and quite
rugged. We’re great people, though (Laughs).

JR: I think a trip is in order! (Laughs)  So, it seems that you’ve had quite a busy last couple of years, with being Mr. Leather UK and Mr. Leather Europe.  What was your most exciting experience so far as a Titleholder?
KA: I have had lots of exciting moments the last couple of years. The most shocking
ones probably were when they announced me as Mr Leather UK, being in the Top 20 at IML, and being named Mr. Leather Europe too. The feeling of that moment is very weird… almost impossible to describe.  But if I had to choose a very specific moment, that’d be the whole experience of IML. It is mind-blowing being part of it. I’d never thought I’d have the courage to do that. But I am glad I did, as I found an amazing family there.  Overall, these couple of years have been very exciting. The experience has literally turned my world upside down in a good way. Sometimes, I still find myself looking back and wondering how or why it happened! I guess destiny is written.

JR:That seems to be a common consensus!  So, Spain is getting quite a reputation for being a Bear lover’s paradise.  True?
KA:  (Laughs) So true! Not only that, but we are caring and lovely, just like teddy bears! What else can you ask for? (Laughs)  Honestly, Spanish men in general are quite hairy and generally bearded too.  It’s the Mediterranean culture we share with other countries like Greece. The Bear movement has increased significantly in the last few years too, and in the summer there are lots of Bear parties. Being a bear lover myself, Spain is one of  my favourite countries for men.

JR:So, while we’re on the subject: Out of all the places in the world that you have visited, which one was your favourite?  Why?
KA: Wow! When I go on holidays, I love visiting the USA. It sounds really cheesy but people has always been so friendly with me. My favourite place to visit is New York City. It’s always been. I am a huge fan of the New York fireman and policeman departments (and their uniforms of course!), so there’s no better place to visit (Laughs).  The first time I visited was a month on my own. I spent over $1000 only on their souvenirs and filled my room in Spain full of their stuff. I can see myself living in Florida sometime though. It’s very relaxing there compared to London.

JR:Yes, that’s the Florida way of life for you.  So, where are some hotspots in London that you recommend for any Leathermen or Bears who are visiting?
KA: For Bears, I love XXL. The music is good and they have theme nights like Workgear, Cop Nights, and of course, Leather nights. I just wish more people would make a little effort in dressing up, as it creates a nice atmosphere every weekend. It’s a huge club with dancing area and playing area too. For Bears who prefer to have a drink (in gear or not), Eagle London is the place.  For Leathermen and people into Fetishmen in general, there are so many options. The most popular probably are The Hoist and Backstreet. It’s just a matter of checking their websites when visiting London, and it depends what you’re into.  There are many Fetish parties in other clubs depending what you’re into. I still keep discovering new stuff!

JR:As someone who’s spent a lot of time in the US, have you noticed any big
differences in the way the American guys and the European guys cruise, flirt,
and hook up?
KA: (Laughs) There’s a huge difference! Americans are very funny towards Europeans.  I’d say its easier to make a conversation with guys in America. Guys there don’t have to think twice to come and throw an nice compliment to you. Every time I visit the US, I come back with few funny stories to tell. In Europe, we might be more serious at first. It might seems harder to break the ice, but once you do it…
JR:I got it!!! (Laughs)
KA: When it comes to sex though, Europeans are much more open than Americans in
general. We are not afraid of talking about it or even playing in public. The
Leather scene in America seems more socially orientated, whilst our Leather scene
is more sexually orientated.

JR:One of the responsibilities of being a Titleholder is raising awareness for a
particular cause or issue.  What philanthropic cause or charity do you feel most
strongly about?
KA: At work, I am one of the charity ambassadors for my company.  We work mostly for
children in need and endangered animals, which one of my passions… and I’m happy
to spread that passion towards other colleagues too.  Within the Fetish community, I feel quite close to HIV and its stigma. Perhaps because of the size of London and its Fetish community here, this is one of the biggest causes and the one that affects me closer. On the other side, we have amazing social services– and HIV tests and treatments are free, easy, and quick to get in United Kingdom. But for that reason, some people rely too much on that and don’t take care of their sexual health, and that’s why is important to still
bring awareness out there. 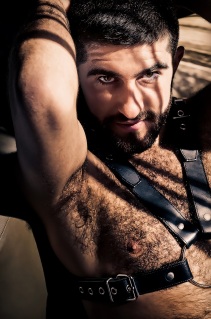 (Above photos of Kilker by Richard Yates Photography)
JR: That’s amazing!  So, Leathermen are seen by many as the epitome of sexiness and masculinity.  As a bona fide sex symbol yourself, what do you personally find sexy in a guy?

KA: Definitely a nice beard. I’ve got such a weakness for facial hair. I don’t really have a preference for colour, but I absolutely love them.  The other one is the eyes. I have a huge weakness for blue and green eyes, dark blue being my favourite. All that would mean nothing with a good personality and sense of humour though.

JR:What would be your ultimate turn-on?
KA: A hot, blue eyed hairy man in cop uniform on his police bike, smoking a cigar.
Is that too much? (Laughs)

JR:Sounds hot!  So, do you have a celebrity crush?
KA: I prefer real grounded men, to be honest. I’ve got no celebrity crush but I have
few crushes around the world. I get a bit shy when I meet them in real life!

JR:I am sure a lot of guys would be happy to help you overcome your shyness!  So, one of your “fun facts” is that you have a non-similar straight twin.  What does he think of your visibity as a Leather icon– and your being one of the most photographed men in the Leather world?!
KA: (Laughs)  He thinks I’m crazy and finds it funny. I keep sending my family some of
the pictures (not all, bless them!) from my Leather trips, and they’re very
proud. I guess it’s harder to understand for him as he’s my twin. We always had
this battle of who was more handsome and I always lost! (Laughs) He’s got gay sex
appeal though and gets along very well with gay people.

JR:That’s great!  Lastly, what events are you planning on attending this year?  In other words, where can we find you?
KA: For now:
Amsterdam Fetish Pride and first ever Mr. Leather Amsterdam, May 10-12th;
International Mr. Leather in Chicago and possibly another US or Canadian city
(Toronto most probably) end of May;
Dore Alley in San Francisco (and another US city) at the end of July;
… and of course, Mr. Leather Europe 2013 at the end of October, location to be confirmed
as of yet… but everyone is welcome here!
For work, I expect to fly to Orlando often and visit Fort Lauderdale as much as
I can.  Other trips depend on work schedule each month. But I made a promise to visit my
IML brothers often in USA, and I’ll keep that promise!