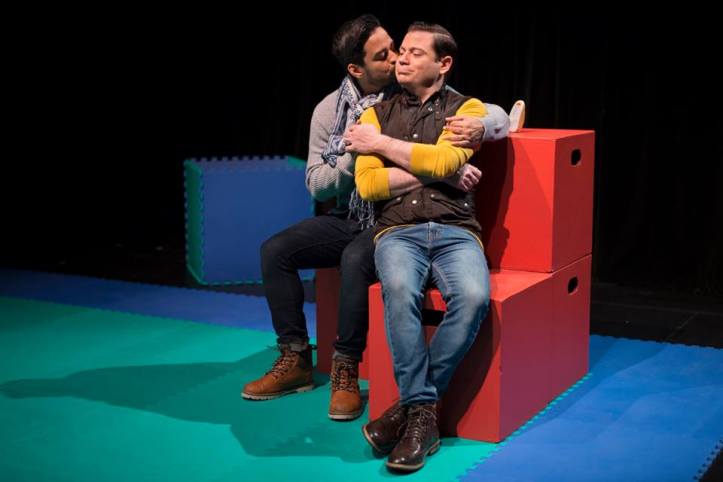 David Stallings’ poignant, highly original new piece The Baby Monitor opens at the home of Damon (David Stallings, doing double duty as actor and playwright) and Phillip (Héctor Matías), a well-to-do gay couple living in Boston.  The two are owners of an LGBTQ-friendly bookshop/coffee house, and are dedicated dads to a two-year old son named Caleb, who has Damon’s blue eyes and Phillip’s patented “butt wiggle”.  It’s Thanksgiving, and the two men have invited another couple to dinner.  That couple is Claire (Amanda Jones), a speech therapist, and her good-natured, laid-back husband Josh (Leo Goodman).  We learn that Damon and Claire are cousins, and that Claire has been the only family member who has accepted Damon being gay since he first came out.  Rounding out the scenario is Soledad (Greta Quispe), Caleb’s Dominican nanny.   At first, the evening seems like a Thanksgiving-themed, made-for-TV movie– complete with talk about the famous family stuffing recipe, after-dinner drinks, pumpkin pie, and all the usual theatrics of a holiday gathering: The adults vow not to discuss politics or religion, yet (surprise, surprise…) both politics and religion manage to wriggle their way into conversation. Directed by Antonio Miniño, The Baby Monitor moves swiftly from the very beginning, establishing the diverse personalities of its strong-willed characters quite early on. Damon is intellectual and resolute– and, as one character later points out, a bit “defensive” in his political and social views.  His husband Phillip, who’s Dominican-American, has a more serene personality.  Claire, while always meticulously choosing every word she says to others, can’t hide her undercurrent of sadness and anxiety; we suspect this may be because she and her hubby Josh have not been able to conceive a child of their own despite five years of trying.  The many proclamations of love and family loyalty peppering the evening notwithstanding, there are traces of tension and culture clash in this holiday get-together.  An example of this is when Claire makes the mistake of asking Damon and Phillip the loaded question, “Which of you is the father?”  (Decoded, the question is actually, “Which one of you is the BIOLOGICAL father?”. File this one under “QUESTIONS YOU SHOULDN’T ASK A GAY MALE COUPLE WITH KIDS”…).  This inquiry, among other triggering statements, touches more than one nerve in her cousin Damon.

The next day, Claire goes back to Damon and Phillip’s house, ostensibly to return a dish from the night before.  Only Soledad and the sleeping baby are home.  With the two very different women now alone together, the veil of polite artificiality is lifted as the speech therapist and the nanny engage in some starkly savage conversation. Unresolved tensions, hidden prejudices, and suppressed resentments which were simmering below the surface in the first scene– and even before– slowly rise to the top. Revelations are exposed.  An innocent picture in a family photo album, combined with a story from the night before about Caleb playing with his action figures, becomes the catalyst for an unexpected turn of events– leading to an ordeal that has long-lasting consequences for all of the characters.  If the first scene in The Baby Monitor was rife with with sitcom-style humor and casual references to politics, culture, and sexuality, the play shifts gears in the second half when one of the characters tells another “You’ll be getting a call from social services.”  The Baby Monitor then becomes an emotional charged, searing adult drama– and there’s no turning back.

The stories of gay parents– and, specifically, the challenges those parents face– have occasionally been delved into via several venues of pop culture through the years: in movies, on TV, and in the theater.  It is unlikely, however, that this subject matter has been explored in a more emotionally complete way as it’s explored in The Baby Monitor.  Even in an era with an explosion of visibility for LGBTQ people in the media, few of those portraits have gone beyond “skin deep”. The Baby Monitor is unafraid to navigate into previously uncharted territory, particularly when it comes to tackling the issue of the deeply ingrained prejudices still faced by LGBTQ people– even as we enter 2019, even in “progressive” cities like the play’s setting of Boston, and even when it comes from people who call themselves our allies.  Just as Stallings’ drama boldly taps into the feelings of its well-written, multi-faceted characters, it challenges the audience to do the same. Mirroring real life, it turns out that the conflicts between the adults in The Baby Monitor are more complicated than just “gay versus straight”.  Other themes are skillfully and meaningfully woven into Stallings’ story, including issues of economic divide, ethnicity, immigration status, white male privilege, and more.

Miniño’s direction is brisk and clean. The energetic cast is universally excellent, unafraid to give the audience sweat, tears, and yes, even blood. Stallings as Damon and Matías as Phillip both give their characters a chance to bare their distinct yet complimentary souls, sharing an empathetic look into their personal backstories.  The two actors have very palpable chemistry together.  Amanda Jones as Claire gives complexity and a modicum of sympathy to a role which could have very easily been a heavy-handed, one-sided characterization.  Leo Goodman is superb as Josh. The intimate husband-wife dynamic between Jones’ Claire and Goodman’s Josh is powerful to watch.  In the pivotal role of Soledad, Greta Quispe gives a truly transformative performance.  As Damon’s spunky, no-nonsense best friend Shelly, Mel House is perfectly cast.  Both the actor and her character are a powerful presence from the minute House appears on the stage, such as when she offers her friend some supportive advice on the real meaning of family: “YOU are not the problem here, babe!  And when you ‘let that go’, you’ll realize that you don’t have to be ‘two people’ depending on who’s in the room– or have ‘two families’!”  That’s just one of the many lessons learned in The Baby Monitor: You may have to fight for who you love and for what you believe in… but it’s a battle well worth fighting for.  And losing is NOT an option.