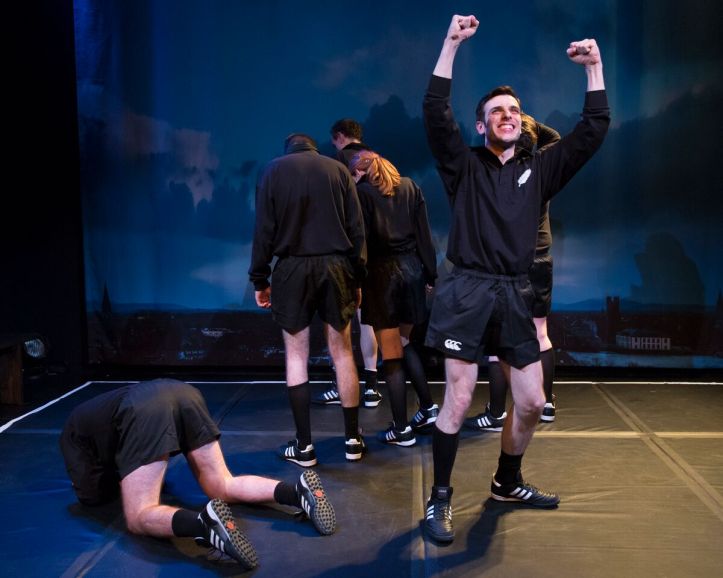 Set in Limerick, Ireland in 1978, John Breen’s 2004 heartfelt rugby comedy Alone It Stands is finally making its debut in New York City, as part of Origin Theater Company’s 1st Irish Festival 2019.  As anyone familiar with the sport knows, rugby is a highly intense, highly physical undertaking with an equally high risk of injury.  But just as hard as ruggers compete on the pitch (field), they celebrate even harder after the game. The spirit of both “Take no prisoners!”-style competition and after-game “Hit the bar!”-style fun come through very well in equal doses in Breen’s slice-of-life story– complete with male bonding, performance anxiety, rugby songs, beer, and… yes, injury.  Of course, there are also real-life, non-rugby issues competing for these characters’ attention along the way.  And, lest we forget, the play is based on a true story: On October 31, 1978, the Irish provincial team Munster Rugby declared a 12-0 victory against the highly successful All Blacks, the national team of New Zealand famous for their all-black uniforms and their performance of a “haka” (a ceremonial dance or challenge in Māori culture) before each match.  It would be the only time any Irish team, national or otherwise, had ever beaten the All Blacks before 2016. While there is indeed a thriving rugby subculture in the United States, it will help for American viewers to understand just how important the sport is many other countries– especially England, Wales, Argentina, Australia, New Zealand, and yes, Ireland.   As one of the characters states early on, “Rugby is a religion in Limerick!”

Alone It Stands is perhaps most distinctive for its bold choice of having six actors play 26 different roles. The sextet (five men and one woman) tackle, run, and leap on stage as both the Munster Rugby team and as the All Blacks, but they also play all the secondary characters– including but not limited to one player’s pregnant wife, a chorus of singers, group of teenage boys planning a bonfire, a teenage girl, the match spectators, two newborn babies, and even a dog named Sinbad. The actors make their swift transitions without the benefit of costume changes, often with several scenes happening on the stage at the same time.  Indeed, one of the play’s funniest segments is an intense, noisy childbirth (“I have the head.  All you have to do is push it down!”) alongside an intense, noisy scrum (“I have the ball. All I have to do is put it down!)– happening concurrently on stage and skillfully executed by the actors.  Alone It Stands takes great effort in reproducing some of the more well-known, exciting rugby moves–as much as it is possible, of course, on a small stage. The play also uses a lot of the sport’s lexicon– including all the players’ positions and the term “Garryowen” (That’s a high kick forward followed by a charge to the spot where the ball lands… Remember that term, because another meaning becomes important towards the end of the play!).  That said, the show will be equally enjoyed by those who aren’t familiar with this exhilaratingly brutal sport.   In addition to the comedy and action, there are also some moments of drama:  One player deals with the loss of a family member, and another misses the birth of his twins, even after his wife specifically asked that he didn’t go to the game.  Will she forgive him?  We find out in the post-game endorphin rush in Act 2. 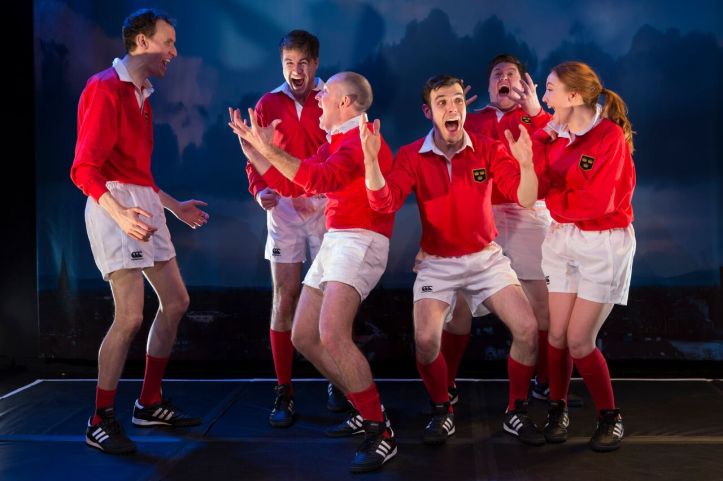 A true ensemble piece, Alone It Stands lets all the actors have their moments– and since all six performers play many characters, there are many moments of humor, pathos, and that universal essence of human spirit to be had.  All the actors succeed at comedy as well as wordless acting, with their facial expressions being especially potent given the intimate space of the 59E59 Theater. The cast genuinely looks like they’re having fun with this piece. The beginning of Alone It Stands may be challenging for some audience members, with the transitions between the many characters happening so swiftly– particularly the shifting between the Irish and the New Zealand players. (Some of the actors are better than others at interchanging their accents and style of delivery, which is pivotal.)  It’s a challenge worth taking: By the conclusion of Alone It Stands, the audience will be routing for the Irish team that made their own piece of rugby history.  We feel their joy… along with their sore ribs and morning hangovers. 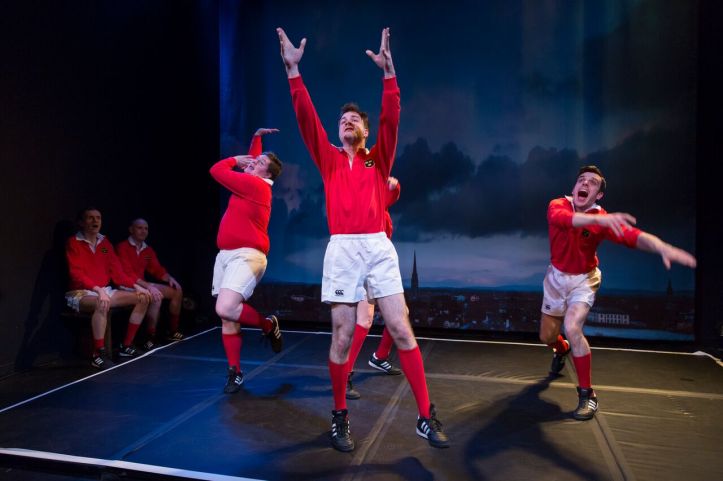