What is conversion therapy?  Sometimes called “reparative therapy”, it is technically defined as “the pseudoscientific practice of trying to change an individual’s sexual orientation from homosexual or bisexual to heterosexual, using psychological or spiritual interventions.”  The “pseudo” in “pseudoscientific” is key– because despite some religious leaders, politicians, and rogue therapists who strongly advocate for the practice, there is virtually no reliable evidence that sexual orientation can be changed.  Overall, it has been widely established that conversion therapy practices are not only ineffective but can be potentially harmful.  In addition, there’s the issue of consent.  For as long as the practice has been in existence, many individual medical practitioners and health organizations as a whole have declared that changing someone’s sexual orientation against their will is unethical under any circumstances.   Various jurisdictions in the United States, Canada, South America, Europe, and Australia have passed laws against conversion therapy.

With recent attention in the news and as the subject of some recent high-profile movies, conversion therapy may seem like the something of  a “topic du jour”.  In actuality, the effects of someone who has undergone the experience can last for a lifetime.  Award-winning author Peter Gajdics (pronounced “guy-ditch”) knows about conversion therapy and its lasting effects.  Gajdics was born and raised in Vancouver, Canada, to immigrant parents from Eastern Europe. He knew from an early age that he was gay, but was not ready to accept it at the time. In his early 20’s, Gajdics turned to a local psychiatrist for help– and within months, he found himself embroiled in a bizarre, extreme sort of conversion therapy that attempted to “cure” him of his homosexuality.  Gajdic’s 2017 memoir The Inheritance of Shame documents the author’s six-year journey through, and eventually out of, this renegade form of “therapy”.  In addition to the stories of genuine horrors from the “treatment” itself, the book also tells of his subsequent legal battle with his former psychiatrist, his complicated family history, and his attempts to reclaim his life and true identity after the ordeal.  The Inheritance of Shame, which is Gajdics’ first book, went on to gather many positive reviews and was praised in various LGBTQ+ literary circles: The memoir won the Silver Medal in LGBT Nonfiction at the 2018 Independent Publisher Book Awards,  was a Nominee for The Randy Shilts Award for Gay Nonfiction from The Publishing Triangle, and a Finalist for Sixth Annual Saints and Sinners Emerging Writer Award.

With its universal themes of survival and self-discovery, Peter Gajdics’ story seems ripe for the stage.  Joseph W. Rodriguez, actor and Producing Artistic Director at New York City’s Playhouse Creatures Theatre Company, is Executive Producer of a staged public reading of Gajdics’ own stage adaptation of The Inheritance of Shame, on Monday, March 11, 7 PM., at New York City’s The Wild Project. Rodriguez tells me, “Playhouse Creatures is honored to bring this important story to the stage. I am reminded of ancient Greece; they subsidized their citizens to attend theatre. There, in drama, people saw the failings of themselves, in sharp relief, and were given the chance to reflect. Today, we live in a world devoid of reflection and empathy. This work is all about that– learning to see, hear, and feel, to understand that we ALL have demons, but can escape them. But… only if we try and accept each for who we are. That is why our mission (the Past, The Present, and the Future) is truly essential in 2019. Peter’s great work is just what we need on stage– right now!”

The staged reading is directed by New York City based producer and director Scott F. Davis, who is Manager and an Artistic Associate of Playhouse Creatures Theatre Company. Davis took the time to speak to me about his affinity for this project… and why this is an important story that needs to be told in 2019: 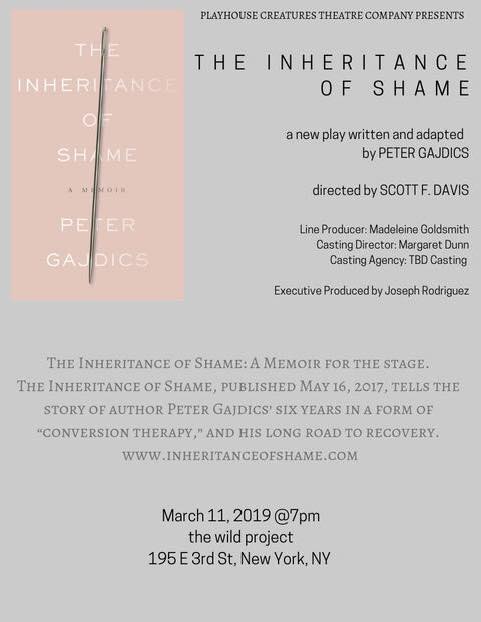