Hikmete the Clerk: “Imagine, Mr. Mayor, our Constitution actually allows two people of the same gender to marry, and we had no idea!”
Mayor: “Yes, because we as a nation don’t read. The Prime Minister probably signed the Constitution without reading it at all.”

55 Shades of Gay: The Balkan Spring of the Sexual Revolution, Jeton Neziraj’s laugh-out-loud comedy now making its United States premiere at La MaMa in New York City, features the central story of two men who apply for a marriage license in a small town in the East European country of Kosovo. Their requests sends a local clerk Hikmete (Shengyl Ismaili) into a state of frayed frenzy, the Mayor (Semira Latifi) into a state of emergency, and the entire conservative Balkan town into… turmoil. Same sex marriage has, in fact, been sanctioned by Kosovo’s Constitution since 2014: a move at least partially made to keep up with the progressive policies of the European Union. It’s a safe bet that most Americans probably can’t even find Kosovo on a map– but the play’s universal message of overcoming bigotry and fighting for equality is relevant whether in Kosovo, or… Kentucky! In fact, the story of 55 Shades of Gay is eerily similar to the scandal caused when Kentucky county clerk Kim Davis out-and-out refused to issue a marriage license to a gay couple in 2015, even though same-sex marriage was completely legal in the States. It’s a reminder, as history has proven, that while equal rights can be written into law, it always takes more than just a piece of paper to overcome generations of prejudice. Although exploring some heavy themes and featuring an unexpected moment of silence-inducing tragedy towards the end, 55 Shades of Gay is first and foremost a comedy.  The play tickles and titillates the audience with its colorful, multi-media mix of bawdy dialogue, music, burlesque, and visual projections– all imbued with naughty but smart humor and a lovingly over-the-top queer sensibility running throughout (starting with the blindingly bright raspberry-colored costumes and set pieces!).

55 Shades of Gay, directed by Blerta Neziraj and performed by Kosovar theater company Qendra Multimedia, takes place in the town of Tashanik. After Kosovo suffered through so many well-documented years of unrest, the country has finally achieved a modest sense of peace. But life in this tiny town is disrupted with the announcement of the building of a condom factory. The project will be funded by an Italian humanitarian and a donation from the European Union– and promises to employ 200 people. Some see it as good news: As one character proclaims, “Our town will flourish like marijuana flourishes in Albania!” Others aren’t as excited. The opening of the prophylactic plant, however, is nothing compared to the next local “scandal”: Handsome and wealthy Italian businessman Adriano (Bujar Ahmeti) has announced his plans to marry his equally handsome boyfriend Merlin (Tristan Halilaj) a local man. Tashanik erupts in hysteria . Adriano goes from being “an honorary citizen of Tashanik” to the town scapegoat. Politicians, religious leaders, a gathering of “artists and intellectuals”, and “the official grenade launcher of the town” (who can’t throw straight) all join the crusade to keep the wedding from happening. Adriano and Merlin’s planned nuptials are blamed for everything from air pollution to a rise in depression. Nevertheless, Adriano is determined to march on with his plans to marry– and to “march” in an even bigger way: He envisions the first Gay Pride parade in Tashanik. In his own words, “An Italian never gives up!” (The play turned out to be prophetic: One month after the premiere of 55 Shades of Gay in Prishtina, Kosovo, the town held its first ever Gay Pride Parade.) Merlin is equally committed: “All I’ve wanted in life is a man who loves me, and now I have him. And I want to marry him!” Will Adriano and Merlin ever see their wedding day? And more importantly, what will they wear? 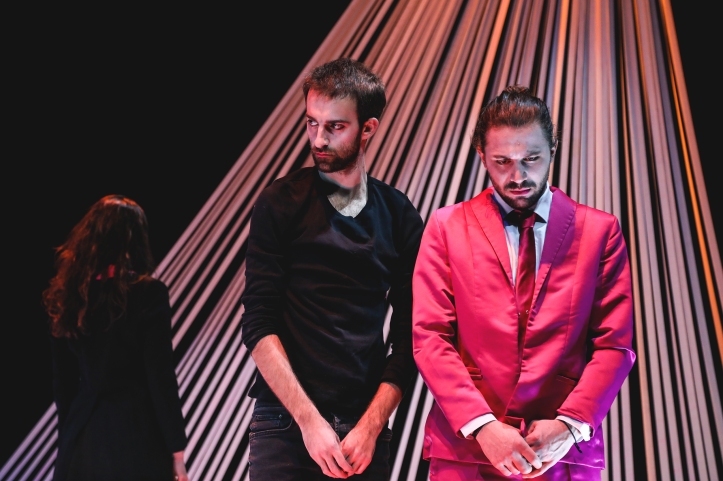 A great source of the humor in Neziraj’s play comes from the hyperbolic reaction of the town to the innocent wedding plans, as well as, paradoxically, the Kosovar concern about how they look to the proverbial “rest of the world”: While the townspeople simply can’t accept the idea of two men tying the knot, they also worry about how their reputation– particular when looked upon by the progressive European Union. The script even inserts a bit of American-centric humor into the show: The aforementioned list of “artists and intellectuals” includes a collection of well-known American right wingers. The talented, energetic cast– several of whom play multiple roles– clearly has fun with this production. The play’s main underlying theme of the freedom to love– and the prices that we often pay– is indeed a serious one, but 55 Shades of Gay succeeds not only as a statement about LGBTQ equality but also as a deliciously raunchy, truly unique comedy that’s more relevant than ever in 2019.