SINGIN’ IN THE ER: A Review 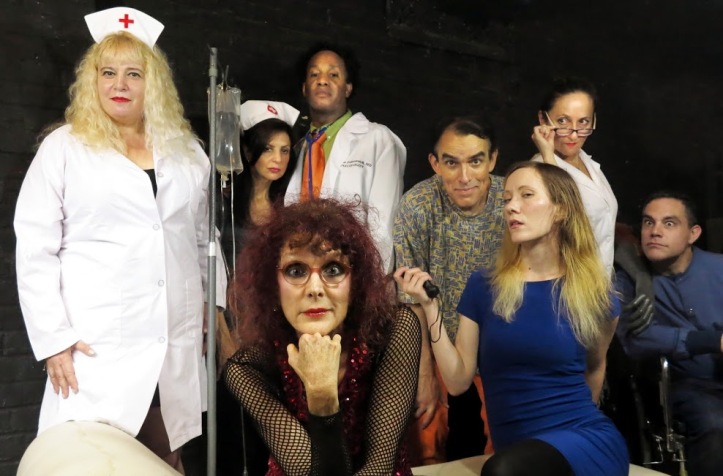 Actually, in Ruby Lee Reyner’s Singin’ in the ER, now making its World Premiere at Manhattan’s iconic Theater for the New City, you’d expect those blood-smeared walls to join the cast, in Greek chorus style, for a rendition of the play’s titular theme song. When our, shall we say… “welcoming committee” first makes their entrance onto the stage– complete with head honcho “Dr. Schlong” (Levi Wise) and nurses in vintage hats, white tights, and short skirts, you may want to be voluntarily committed for some laughter therapy. (For the record, whenever you see a movie, TV show, or play where the nurses wear high heels, you should immediately know not to take things too seriously…!)

Robin Brenner (Nurse) gets blood in her face. Photo by Jonathan Slaff.

Reyner’s musical parody takes place in the emergency room of the presumably fictional St. Vickie’s Hospital, a not-so-subtle homage to the famous and now-closed St. Vincent’s Hospital, which was a pivotal landmark in the history of New York’s colorful Greenwich Village. (The Bleecker Street reference is a dead giveaway…) Populating the ER are a wide variety of weirdos. They include a lady who’s arm is falling off (Mila Levine), a lady physician aptly named “Dr. Doomskya” (Laura Pruden) , a sarcastic RN (Robin Brenner) that would make Nurse Ratched seem like Mary Ann from Gilligan’s Island, and a creepy hospital hanger-on named “Scabby the Junkie” (Richard Craven)– the kind of guy who hangs out outside ER’s scaring people into dropping their bottle of pain pills. And yes, there WILL be blood. But fear not, hemophobes: Those previously mentioned blood spatters on the walls are done with the creativity of an impressionist painter, the red stains on Dr. Schlong’s lab coat are crafted in the pattern of a high-end fashion designer, and the “spurting blood” is actually Silly String. This already crazy ER is sent into even further insanity when a “famous Broadway has-been” named Amanda Reckonwith (Ruby Lynn Reyner) appears– complete with Titian-colored hair and flaming red dress and lipstick to match. (Think of Reyner’s character as sexpot/actress Tina Louise in the TV-movie era of her career…) In what would be her greatest role, Ms. Reckonwith’s appearance cumulates in a weirdly disquieting “birthing scene” that would make filmmaker John Waters proud. (I wont give too much away, but let’s just say that if the opening segment of Fantasy Island is a trigger for you, beware!) Adding to the medical madness is a petite, blonde, by-the-script social worker (Joyce Miller) who attempts to rehabilitate Scabby the Junkie. This character seems to have walked in from an entirely different play altogether, until she changes her wardrobe for a less genteel (but definitely more lucrative) career pathway. The over-the-top and campy characters and situations are all adorned by equally over-the-top and campy musical segments, including one number credited to Ms. Reyner and the late great Warhol Superstar Jackie Curtis, called The Biggest Balls in Town. It’s balls down… uh, I mean, “hands down” the funniest musical bit in the show.

If it all the aforementioned absurdity sounds just a bit, well, ridiculous, it’s largely because the show’s creator/director/actor Ms. Reyner is an original ingenue of John Vaccaro’s legendary Playhouse of the Ridiculous— the revolutionary New York City-based troupe famous for its over-the-top, anarchic productions as well as their copious use of glitter. Despite the references to such modern-day phenomena as Ebola and Mad Cow Disease, the spirit of Singin’ in the ER is very much in tune with the Playhouse of the Ridiculous’ “Take it to the highest level– and then, go further!” mentality and style back when theater wasn’t afraid to shock the masses. As anyone who has ever worked in a hospital setting can testify to, humor is more than just a diversion from the long hours and often gravely serious scenarios. It’s almost a REQUIREMENT for survival. How much the audience likes Singin’ in the ER will depend on just how much of the play’s unapologetic, politically incorrect bawdiness they can take. Still, even the most stuffy of theater-goers will find it hard to resist the cast singing and dancing to Johnny Burnette’s Rock Therapy towards the play’s finale. And who knows? Maybe modern-day nurses will reclaim those vintage hats, white tights, and short skirts back from X-rated movies and slutty Halloween costumes. No doubt, “Dr. Schlong” would approve…

All photos by Jonathan Slaff.