THE STORY STAYS IN THE PICTURE: An Interview With Filmmaker Haiyang Yu

He currently calls Los Angeles his home, but Haiyang Yu has a far more global vision.  He understands that thought-provoking and touching stories have the energy to influence the world. From fireside folk tales, to racy comedies, to cinematic dramas, this young, award-winning filmmaker believes that narratives are essential to human beings. His current project, the short dramatic film Hold On, tells a story that promises to touch the viewer.  In its 15-minute running time, the film explores the universal issues of religion, sexuality, and family in a big way.
In Hold On, A middle-aged, single Christian mother Sara (Lidia Vitale) discovers that her physically disabled son Ethan (Jesse Howland) is developing a strong need to explore his sexuality.  Sara is the sole caretaker of Ethan, who has limited use of his arms and legs. Every day, she goes to church and prays to God to be a better mother to her son.   One day, as she puts Ethan’s iPad away, she sees images that make her realize that he is gay and also in need for the intimacy of a partner.  She has to choose between her faith in God and the love and understanding she has for him. With little support from her church, the struggle weighs hard on her to fulfill her role as a good mother and explore the possibilities of a fulfilling relationship for her son– while asking herself, “Who should I serve – My son or my God?”  When Sara sees how lonely her son is, she decides to find him a partner. She pursues different avenues and interviews different young men, finally deciding on one of them.  But will Sara follow through with her well-intentioned plan? 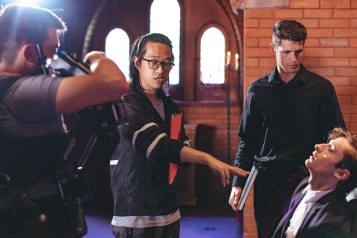 Haiyang Yu started his writing career as a Mandarin creative copywriter after he got his Bachelors Degree in Communications in China. He includes Fyodor Dostoyevsky, Ingmar Bergman, and Federico Fellini as his inspirations.  With the bi-cultural point of view and decade of experience working with artists around the globe, Haiyang has made the leap into features. He slates upcoming feature projects, including Nice To Meet Me, described as “a fun, thought-provoking, body-swap comedy”, and Falling Days. Falling Days is a coming-of-age drama/gay love tragedy set in 2003, detailing a Chinese-American teenager who lives ahead of his time. His quest for true love has alienated himself from his world and is challenged by the interference of his traditional Chinese mother.  So, he has to wrestle between choosing for her acceptance and pursuing his own honest life.

Haiyang Yu took the time to speak to me about Hold On, life as an L.A. filmmaker, and much more…

JR: Indeed!  So, in addition to making Hold On into a feature film, what else are you working on?
HY: I am writing a script about a gay Chinese-American man whose quest for love is challenged by his traditional mother… and also, society is not ready for him. There’s also a love tragedy with his Caucasian boyfriend.  The story is set in 2003– so like I said, the world is not ready for them.  Nowadays, the world is more open to same-sex marriage and stuff like that– but the tragedy has already happened, because they cannot live ahead of their time.  Today, it’s a totally different world.
JR: No doubt!  So, when you’re not working on films, what do you do in your spare time?
HY: I just meet people, talk, watch TV shows, watch films… just very common, basic stuff! (Laughs)
JR: Me too!  So, finally, is there an actor who you’d really like to work with one day?
HY: Cate Blanchett.  She’s phenomenal.  I love her.  And Natalie Portman…
JR: Good choice!  I like both of them too!  (Laughs)  Thank you for speaking with me!

You can connect with Haiyang Yu on Facebook at: