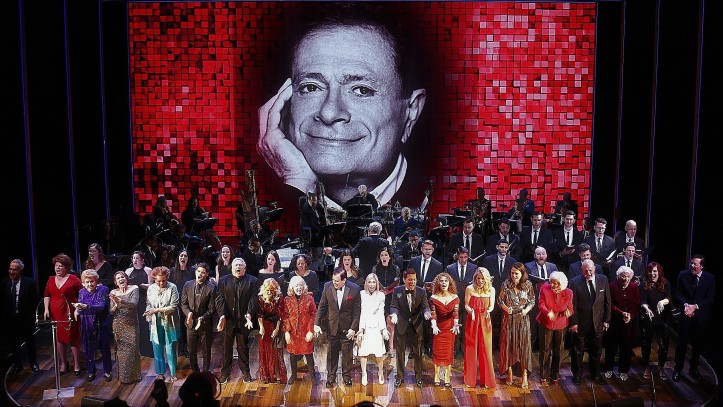 Mame… Hello, Dolly!… La Cage aux Folles… Mack and Mabel… The enduring songs from these quintessential gems of musical theater continue to delight audiences in 2020 just as much as they did when they were first heard on the Broadway stage decades ago. Jerry Herman, the man behind that ageless music, was born on July 10, 1931 in New York City. He would go on to become a legendary composer and lyricist: nominated for five Tony Awards and winning two of them. In 2009, Herman rightfully received the Tony Award for Lifetime Achievement in the Theatre. He was also recipient of the 2010 Kennedy Center Honors. Throughout his life, Herman earned many distinctions in his chosen career pathway:  He is the only composer/lyricist to have had three original productions open on Broadway at the same time from February to May 1969: Hello, Dolly!, Mame, and Dear World. He was the first of only two composers/lyricists to have three musicals run more than 1500 consecutive performances on Broadway: Mame (1,508), La Cage aux Folles (1,761), and Hello, Dolly!, which enjoyed a whopping 2,844 (!) performances. 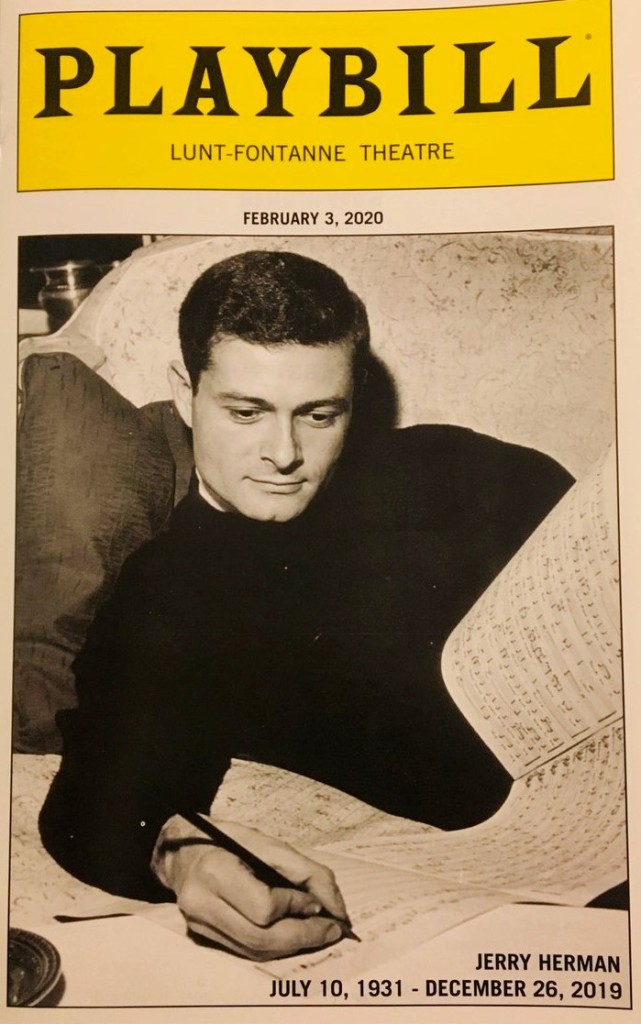 Jerry Herman passed away on December 26, 2019. He was 88– which, as a member of his family would note, is poetically the number of keys on the piano. Broadway theaters dimmed their marquee lights on January 7th, 2020 at 6:45 PM for one minute in memory of the entertainment icon. The legacy of Mr. Herman will forever be a part of the long, rich, transgenerational history of both international musical theater and mainstream pop culture, which have always been deeply interwoven. Herman, who started playing the piano at age three, has already been honored by a star on the Hollywood Walk of Fame, a theater named after him on the campus of the University of Miami, and induction into the Songwriters Hall of Fame. On Monday, February 3, the man who came into the world as Gerald Sheldon Herman was honored again with, appropriately, a grand afternoon of music and stories from those who knew him professionally and personally. Held at New York City’s Lunt Fontanne Theatre, the Memorial Celebration featured a 29 piece orchestra, an ensemble of 19 singers, and a cast of 16 stars which read like a “Who’s Who” of Broadway culture. The event, which was both endearingly poignant and exuberantly joyous, was produced by Herman’s goddaughter Jane Dorian, Michael Feinstein, and Terry Marler, with smooth direction by Marc Bruni and superb musical direction by Larry Blank. In addition to the music, the event featured many personal stories about Mr. Herman, courtesy of those who knew him personally– including Ms. Dorian, Alice Borden (Herman’s friend for 70 years!), Harvey Fierstein, and –via video– Sir Paul McCartney and Angela Lansbury. As Ms. Dorian noted, “Jerry had an incredible talent– not just for music, but for living!” She also shared that Herman was open about being gay and being HIV positive, offering hope and encouragement to those living with the virus. Well into the show, Leslie Uggams delivered a phenomenal performance of I Am What I Am, from La Cage Aux Folles. As her delivery went from mannered soulfulness to over-the-top triumphance, the audience developed a collective feeling that this enduring anthem may have been one of Herman’s most emblematic songs in his very extensive catalog. 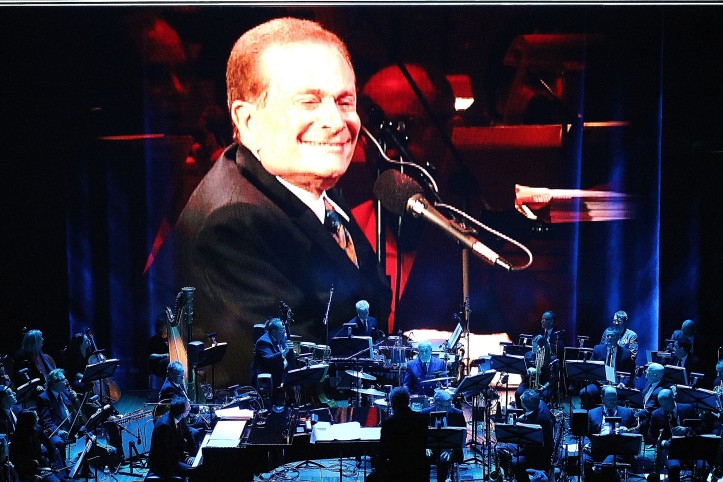 The evening kicked off with an overture from Mame, of one of Herman’s most adored works. Appropriately enough, the first number of a show which honored the man who was all about celebrating life was It’s Today from Mame, performed by the amazing Marilyn Maye. Later, Lorna Luft performed Gooch’s Song as a comedic burlesque, complete with Agnes Gooch’s frumpy sense of style and even a faux baby bump (!), resulting in hearty laughs from the audience. Kea Blackhurst and Tyne Daly teamed up for Herman’s eternally offbeat duet of female friendship, Bosom Buddies. Lovely Kristin Chenoweth took an appropriately melancholy and haunting turn with If He Walked Into My Life. As Jane Dorian shared in one of many personal stories that afternoon, her Uncle Jerry liked to write “songs that the audience would want to sing as they left the theater”. For the titular number honoring the larger-than-life heroine Mame Dennis, Ron Raines and the Ensemble accomplished Herman’s mission very well with a robust performance. As you may have guessed, It would only be one of many times that afternoon where the audience was tempted to sing along.

Herman’s Hello Dolly! has become one of the world’s most enduring musical theater hits, with four Broadway revivals and international success– and to the audience’s delight, and there was no shortage of “Dolly” this afternoon. Early on in the show, Jeremy Jordan performed It Only Takes a Moment, awash with romanticism and smooth, youthful soul. John Bolton (currently playing Horace Vandergelder on the Hello, Dolly! tour) gave the audience It Takes A Woman, complete with all the deliciously campy chauvinism of the lyrics and some hip swivels (!) for good measure. The true “Dolly climax” came with the fantastic Betty Buckley, who performed the musical’s titular theme with delectable gusto. Kelli O’Hara’s take on Before The Parade Passes By started with an aching sense of longing before slowly turning empowering and life-affirming. Her voice was spectacular– and in a particularly irresistible touch, the audience was treated to a moving stream of portraits of all the leading ladies who played Dolly Levi on stage (There were… MANY!).  After what can only be described as a musical theater fever pitch, lovely Bernadette Peters gave the audience a much-needed cooldown period with Time Heals Everything from Mack and Mabel, complete with her patented sultry style.

The music of Mame and Hello, Dolly! showed their enduring appeal that afternoon, but the audience was also treated to exquisite video projections of photos and artwork from Herman’s other works, including The Grand Tour, Milk and Honey, A Day in Hollywood/A Night in the Ukraine, and many more. Songs from many of those pieces were given new musical life that afternoon as well. Michael Feinstein showed his famed forte for both piano and vocals with I Won’t Send Roses from Mack and Mabel. Debbie Gravitte gave Wherever He Ain’t, also from Mack and Mabel, a delightfully funny and sweet but oh-so-sassy take. Stunning Sutton Foster performed I Don’t Want to Know from Dear World with a girlish sense of idealistic longing. Her delivery was flawless.  Jason Graae got to sing, dance, and get REALLY funny. He even broke out the oboe, giving himself the opp to tell the anecdote of a strange woman asking him, “Excuse me. Are you an oboe-sexual?” His song was from The Grand Tour and was called You I Like (which, after seeing Graae, is exactly how I feel about this performer…). 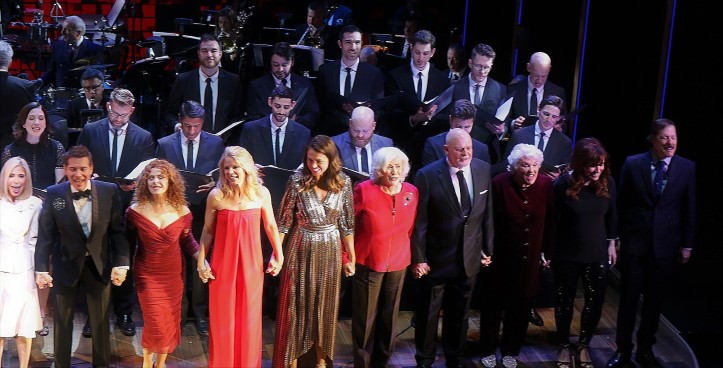 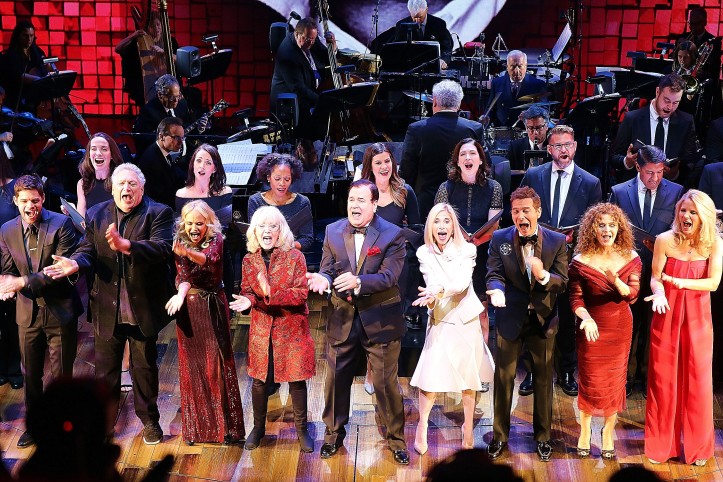 In a night of seemingly infinite talent, the finale had no choice but to be as magnificent as its honoree. The promise was delivered, as the delightful Lee Roy Reams was joined by the Ensemble and, soon after, the entire cast for the appropriately chosen The Best of Times from La Cage. 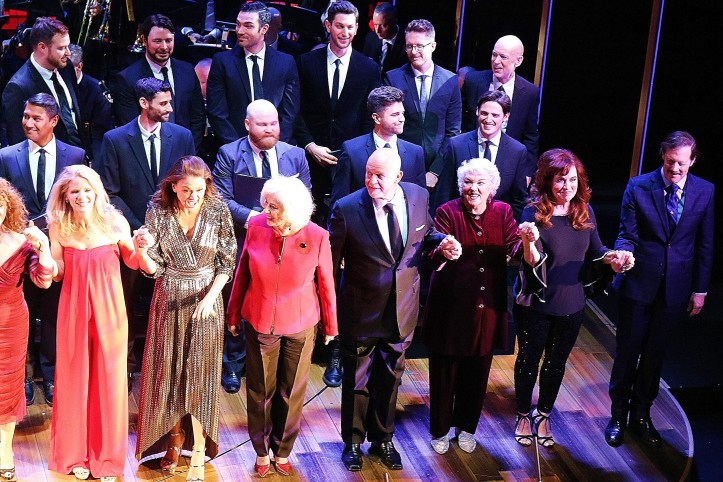 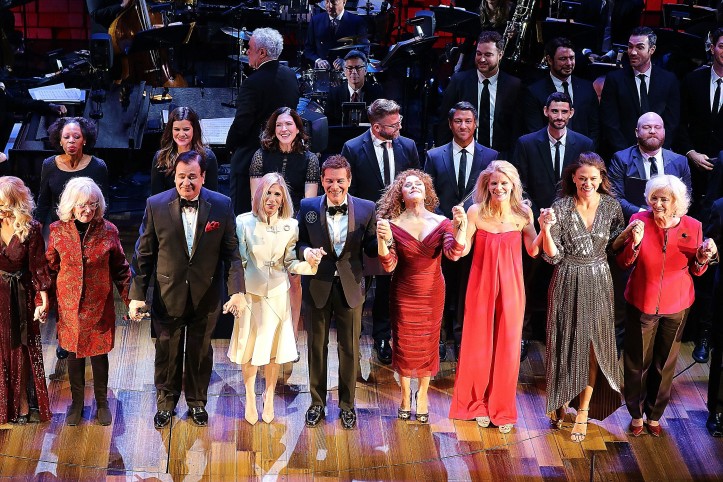 The everlasting appeal of Jerry Herman’s music, combined with the performances of the diverse cast, made this Memorial Celebration a true night to remember. The Producers and Directors of the event also deserve hearty New York City-style applause for their skills in putting together a show which was equal parts sincerity and Broadway-style flamboyance. It may have been 60 years since Jerry Herman made his Broadway debut with the revue From A to Z— but Monday, February 3rd, 2020 at New York City’s Lunt Fontanne Theatre was a starlit prophecy that we will still be enjoying Mr. Herman’s songs in 2030, 2040, 2050, and beyond…