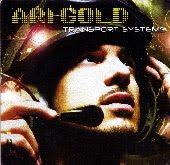 A performer since childhood, Ari Gold indeed knows his own unique celebrity status. He mirthfully calls himself a “homofessional gaylebrity”. As one of the busiest and most visible young gay artists on the music scene today, many culture vultures choose to focus on that unique celebrity status, especially his looks, rather than the albums he creates. But behind the man, there’s the music. And Ari Gold’s music is making history. MTV may not have been ready for an artist who has been out since the beginning of his career– as well as one who is out and proud in his artistry every day– when Ari’s video “Wave of You” first made the rounds a few years ago. But when Gold’s video for “Love Will Take Over” recently bumped Madonna out of the #1 spot on LOGO’s video show, we all knew a revolution was in progress. (That video, incidentally, stayed in the Top 10 for over 21 weeks.) More history is destined to be made with “Transport Systems”, Ari Gold’s flawlessly produced third full-length album. “Transport Systems” opens with bubbly rhythms and sharp grooves, as well as Gold’s friend and equally soulful fellow out musician Adam Joseph harmonizing with Ari as the duo sing, “Feels like gold… solid gold!” What happens next? To quote Ari himself, “Now, let’s get down to the real shit”:

First, there’s all the technological tricks that Ari’s got under his size 30 belt. As Gold sings throughout “Transport Systems”, electronic comets and digital UFO’s combine with old school grooves and retro rhythms. Then, there’s the voice. Ari often layers his patently soulful singing vox with spoken word, which is just as impressive. Whether Gold is crooning soulfully, using the vocoder, or incorporating a more distant vocal style for some of the album’s intense dance tracks, it all comes together for “Transport Systems”. “Transport Me”, the first track, builds up in its intensity as it progresses– the equivalent of a frenetic trip through a time warp– until it reaches its climax. It’s in this track that Gold conveys the message of his album as a whole: “Transport me to another place, to another time…” Indeed, here’s an artist who knows about the power of transcendence through music. The second track, “Ride to Heaven”, is one of the album’s highlights: sort of like a funked-up version of Pebbles‘ 1988 hit “Mercedes Boy”, with a man-to-man twist and some deliciously dirty double entendres (“Show me your big stick shift; I’d like to take a test drive!…”). If there’s a sexier song about “auto-erotica” out there, I have yet to hear it. Check out these lyrics: “If you’re driving a Ferrari, then it’s gotta be for Ari; If you’re driving a Mercedes, it’s not only for the ladies; And if it’s in an old school Cadillac, you know I like it like that (right here in the back!)” The wild ride continues with “Where the Music Takes You”, another track that sounds like it’s on musical steroids, complete with “bringin’ down da house” vocals by diva Sasha Allen. This is intense stuff! Indeed, “Where the Music Takes You” does feel like it transcends across the decades: it borrows a great deal of the freestyle sounds of the ’80’s, touches upon the cool distant sounds of ’90’s house, and ushers us into the renegade, “no rules” philosophy of the music scene in 2007. With the fourth track, “Play It Back”, Gold’s vocals become a bit clearer in focus for the first time on the album, without sacrificing any of the hi-tech stuff. In something that may be a rebuff to critics who believe that feel-good dance/pop music can’t have a “message”, Gold next brings us the provocative “Mr. Mistress”. The song is about the phenomenon of straight men on the “down low”: guys with wives or girlfriends who secretly fool around with men (“I won’t be your Mr. Mistress, I won’t be your man on the side; What you gonna tell your wife and children, That you creep on the down low and you’ve been telling them lies…”). Bold theme aside, “Mr. Mistress”– with its infectious rhythm and heavy beats– is another one of the album’s standout tracks. An absolute stunner of a song comes with Gold’s reworking of the Human League’s megahit “Human”. Even though this track conquered the charts in 1986, the message behind the song couldn’t be more timely in 2007 and beyond. “Human” opens with a violin intro, and a rap intro and interlude by Mr. Man, but those are only two of the surprises in Gold’s superb reinterpretation. “Good Relationship (That’s What It Is)” uses retro-flavored accents for a song about the bona fide joy of man-to-man love. The flip side of joy comes next with “Feeding the Fire”, a somber-sounding track which explores the darker side of nightlife; someone only needs to listen to the dead-on lyrics to know that the song is about guys who, shall we say, “party” too much. “Soul Killer” is a real musical curio, a pounding rock track with some heavy beats and some mega-confrontational lyrics; it’s unlike anything we’ve heard from Ari before, even though Gold’s unique persona (and “bad boy” roots?) does come through. Listening to the hard-hitting track, you can envision Ari throwing his fist towards an audience of rough outer-borough boyz and girlz while shouting, “Soul… killer!… Dream… breaker! Soul… killer! Truth…faker!” (I for one am dying to know who this song was, ahem, “written for”…) Almost as if to offer a cool-down session, Gold gives us the rather touching and tender “Moment of Forgiveness”. “Transport Systems” concludes with the mid-tempo “Love Wasn’t Built in a Day”.

“Transport Systems” is guaranteed to delight, to excite, to titillate, and to get you movin’. But underneath all the great sounds, there’s intense soul, insight and inspiration. And, an astute listener doesn’t have to read too deeply between the lyrics to realize that a love, pride (in yourself and in the community), and equality are recurrent themes. The crown prince of out ‘n’ proud queer music has come a long way. With Ari Gold’s new album, get ready to be transported– in more ways than one.