NOW HEAR THIS! Mary Edwards "A Smile in the Mind": CD Review 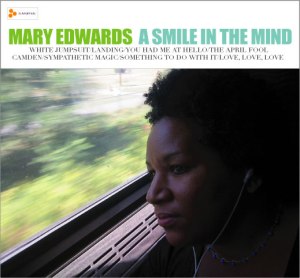 Mary Edwards “A Smile in the Mind”: CD Review

“A Smile in the Mind” is the debut solo album from New York-based musician Mary Edwards. Although this charismatic, self-described “singer-songwriter-composer-arranger-sound designer” has been nurturing her eight-song premiere spotlight album for years, the listener may never realize that fact; The end results seem to flow spontaneously and effortlessly from her lips (and her soul, at that), as if via free association. As a reviewer, I attempt to avoid duplicating my adjectives. However, one characteristic that I find arising from time to time for a select few female artists is “angel-voiced”. As if I need to explain, when I say “angel-voiced”, I mean spiritual, transcendent, and very comforting on the ears and soul. That said, I don’t know if you’d meet many angels who could sing about desire, love, pain, and life in general as well as Ms. Mary Edwards. Edwards may have been born with that voice, but while giving “A Smile in the Mind” a spin, there’s no mistaking who her subsequent musical influences were– Carol King and Steely Dan among them. When listening to her, The Starland Vocal Band 1976 megahit “Afternoon Delight”, P.M. Dawn‘s 1991 “Set Adrift on Memory Bliss” and Seal’s 1995 “Kiss From a Rose” also come to mind. But perhaps the band that’s inspired her the most, which Mary herself has verified, is The Carpenters. The second song on “A Smile in the Mind”, named “Landing”, is the spiritual sister song of The Carpenters’ 1970 “We’ve Only Just Begun”. There’s an important difference which astute music lovers will pick up right away: Mary’s gifted vox has much, much more soul than our dear Karen Carpenter could emote. Edwards’ voice and delivery also capture the fragile strength of her peer Macy Grey without, well, Macy Grey’s patented quirky vociferation.

But Mary Edwards’ voice is only part of the recipe for success on “A Smile in the Mind”. Like champagne, the productions on “A Smile in the Mind” as a whole are gently stimulating and quietly intoxicating at the same time. She sings about the joys of her past, the highs and lows of the very real present (Love, joy, and desire are recurrent themes.), and the optimism of her own future. Throughout the album, this songstress pays superb homage to the past, but not just in regards to channeling some of the most emblematic music of the ’70s. Through her lyrics and emotional delivery on songs like “White Jumpsuit”, she evokes the nostalgia of the generation that she so fondly remembers. Listeners will realize that the album’s calling card incorporates a good deal of Ms. Edwards’ wistful fantasies as much as her own true experiences:

“Revelations,
Technicolor poems,
Condensation,
Rollin’ down the Bel Air windows;
’77
Reservations,
Rosé colored glass,
Conversation,
Tellin’ everyone it’s spendour in the grass;
I’m in heaven…
‘Cause if it really was that way,
I’d be drivin’ down LaBrea Boulevard funkin’ in L.A…”

“Landing”, the second track, features some delicious rifts and grooves, particularly with its opening and closing. I’m convinced that one can sing “Bein’ around you almost gets me high…” with a more genuine feeling of euphoria. “You Had Me at Hello” is more subdued, more romantic– the tone of which suits Mary’s voice to perfection. The song is accented by some bona fide high points in her vocal delivery and some sparkly musical special effects. “April Fool” is the most delicately beautiful song of all on the album, influenced by both jazz and samba-flavored rhythms. Yet, there’s a darker, cooler vein running through the song: a feeling, perhaps, that evokes a late-night, clandestine rendezvous with a forbidden lover. Next up is “Blindsided”, a stark piano-and-vocals only track in which Mary warbles about the downside of desire: pain. Boy, can’t we all relate! The track also allows Mary to show off some incredibly impressive notes. Edwards adopts a slightly confrontational tone with “Sympathetic Magic”. By definition, sympathetic magic is defined as magic predicated on the belief that one thing or event can affect another at a distance, as a consequence of a sympathetic connection between them. It is often used to affect the environment of people, or occasionally people themselves (Kind of like music, huh?!):

“You stood at the door and cried,
but you got smart and realized;
You’re too sentimental,
she’s just superficial;
your sympathetic magic
cast a spell…”

“A Smile in the Mind” closes with an appropriately upbeat “Love, Love, Love”, complete with some exciting musical touches.

The hit songs we remember from our past may rise and fall off the charts, but it’s the emotions that they provoked which make us remember them for years to come. Similarly, with her debut album, Mary Edwards proves that she not only knows how to provoke emotion, but knows how to make a lasting impression as well. With her enlightening persona and her artistic talents, I know that she’ll be provoking emotions and making impressions through music for a long time. And that’s enough to make any music lover…well, “Smile”!